Adventures in Leon during Semana Santa

posted on April 23rd 2015 in Nicaragua with 2 Comments 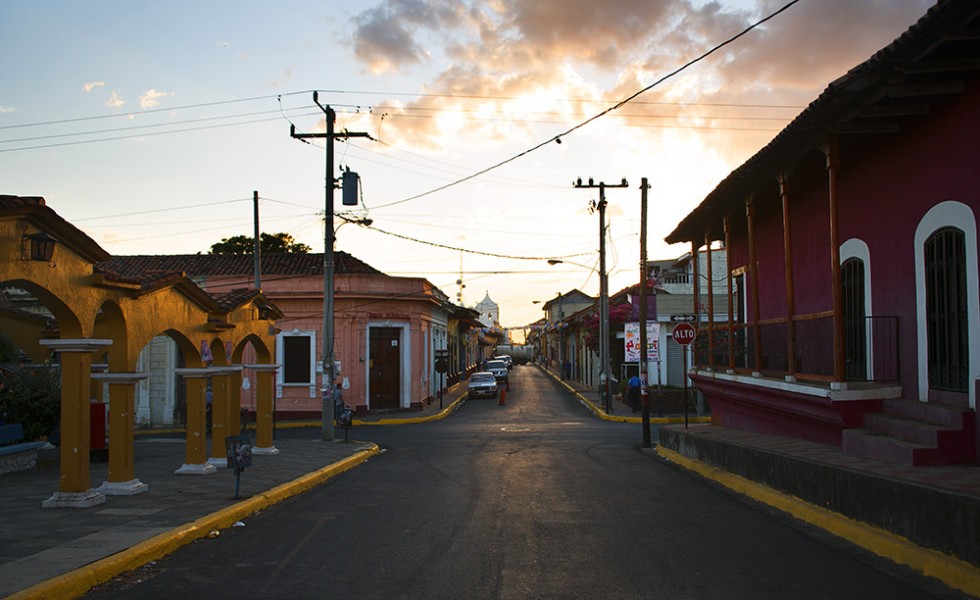 To appreciate Nicaragua, one cannot avoid Leon. It rivals Granada in churches and historical buildings. Leon has the oldest cathedral in Central America and it is sight to behold. We wanted to see it all and what better time to visit Leon than during the Holy week or Semana Santa as it is known in Nicaragua. We began our journey from the maze that is called Managua. I printed primitive maps from Google maps, thinking it would be sufficient as we pulled out from the airport. The very first turn I made was wrong and we ended up driving half an hour in the wrong direction. We got back to our starting point and started all over again. The problem in Managua and in Nicaragua in general, is lack of signs. There are no signs at all. No street signs, no city signs an definitely no road signs. This posed a small challenge but after driving in Panama this was a minor inconvenience. 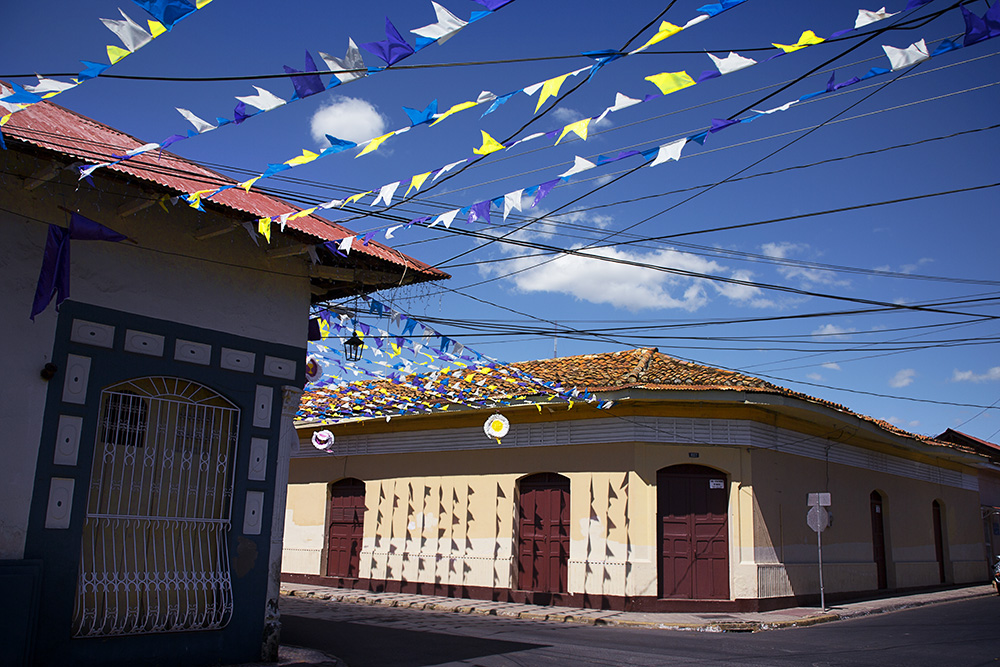 By sheer luck, we came across a sign advertising furniture for sale and there was a small little arrow with the word “Leon” on it and that is how we got back on track and made it to Leon. We were taken aback at how clean and festive it was. Semana Santa was in full swing and it was a sight to behold. We checked into our little hotel and immediately set out to explore the surroundings. There isn’t a ton of information on Nicaragua to begin with and most tourists that we encountered had one of two guide books that are available. (Moon and Lonely Planet). So our exploration was based on a few blogs that we read and whatever little information we could gather from the guide book. 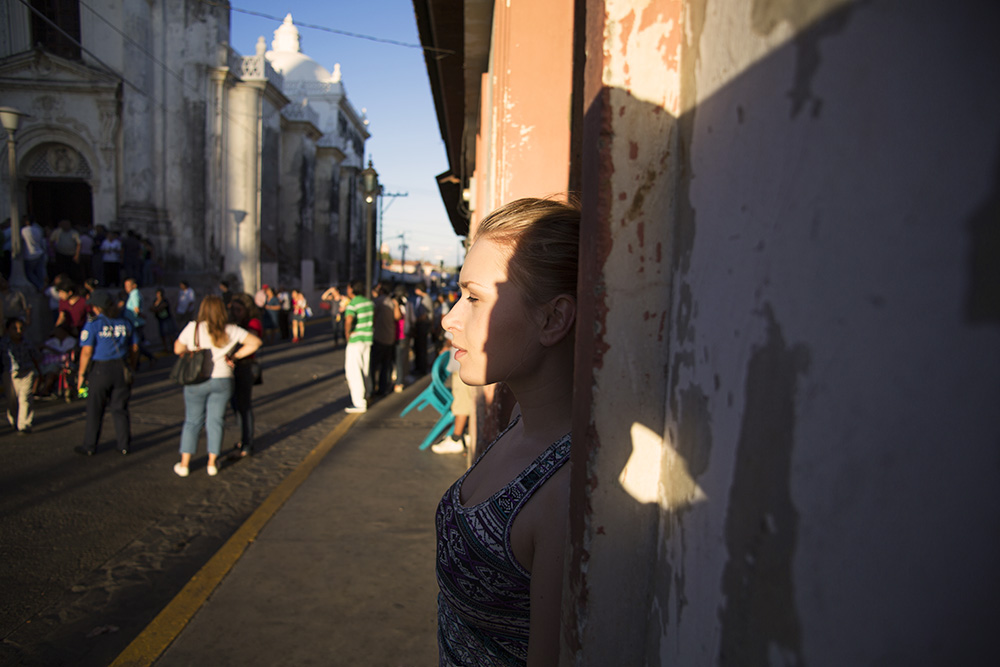 We made our way towards the huge Cathedral of Leon or otherwise known as Basilica Cathedral of the Assumption of the Blessed Virgin Mary. People were walking all around us in their best clothes, making their way towards the service in the Cathedral. We decided to wait outside and witness the procession as it made its way in the setting sun.

The people started filling out of the Cathedral and we noticed that it was dead silent all around. No one spoke. As the priest left, the throng of people with somber looks followed. Nicaraguans are very religious and no one takes Semana Santa as serious as those that live around Leon. While Semana Santa in San Juan is a party scene that destroys the beach and litters streets with empty cans and bottles, Leon is a start contrast to that. We were fortunate to witness it all and words do no justice how beautiful of an experience it was. 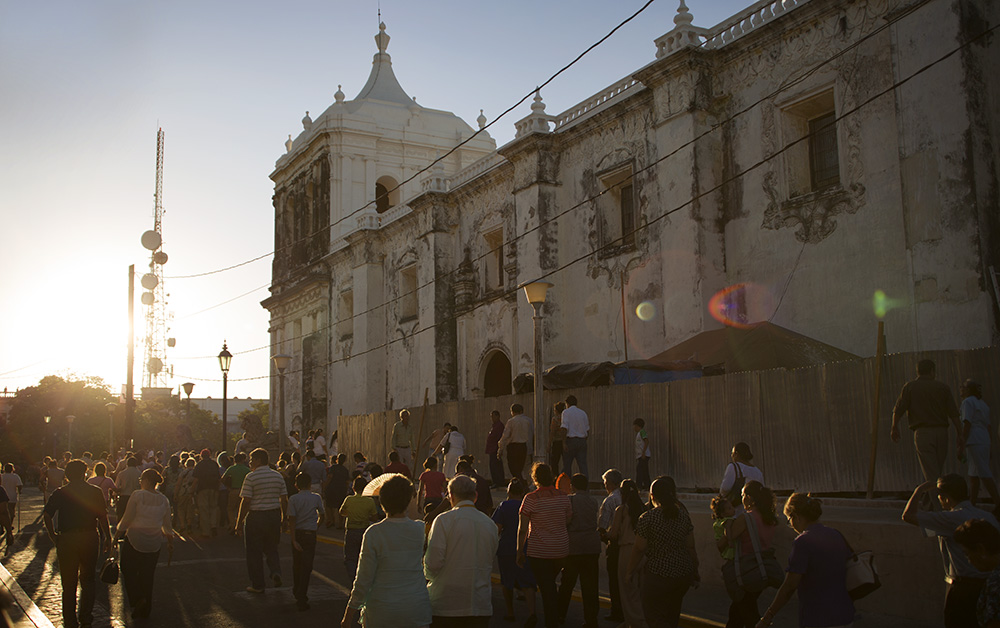 On another day, we decided to check out what the city has to offer and I must say, Leon became our favorite city in Nicaragua. With its colorful facades of houses, house shrines that are visible through bars on windows, the churches and friendly people, nowhere did we feel as safe as in Leon. I am not sure why Nicaragua has such a bad rep. Costa Rica is a far more dangerous country with drug pushers on every corner in the surf towns. 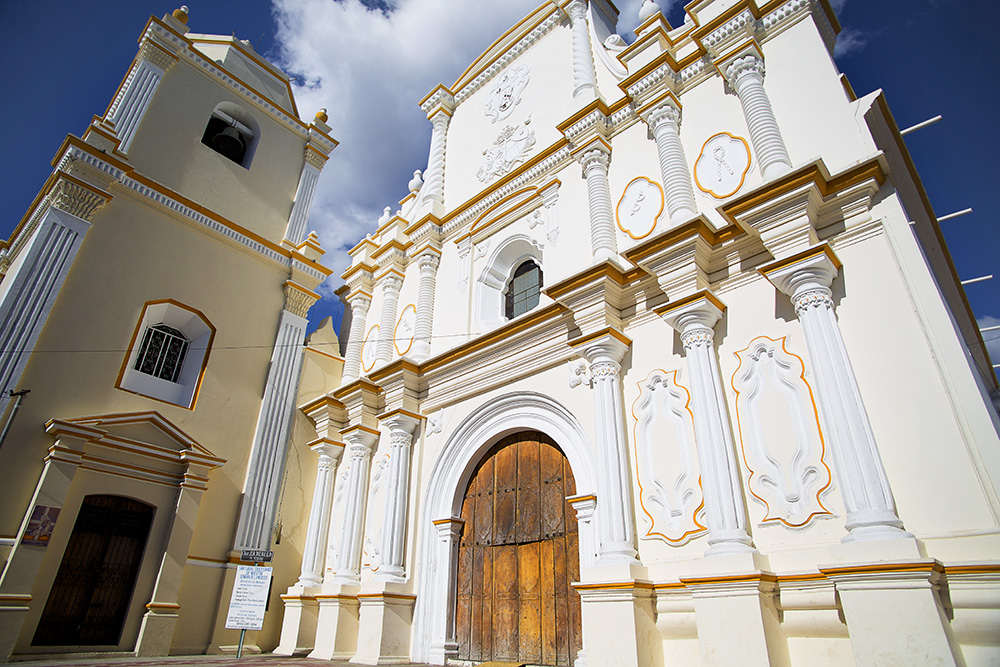 I loved how much detail and work was done on each church. They were all different from one another and while the economy is sputtering along in the country, the churches are being maintained and restored. They are a sense of huge pride to the locals and many smiled at us whenever we took photos of their beloved churches. 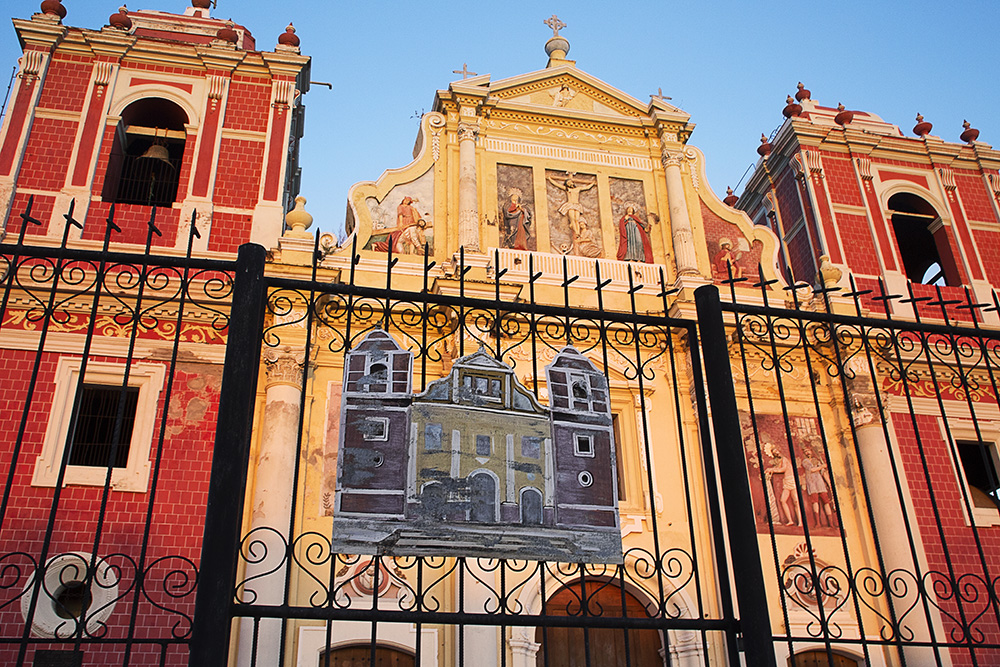 For budget savvy travelers, Leon is the ultimate destination to save money. Prices in hotels, restaurants and activities are very reasonable. We have heard that Leon has some of the best street food around and were happy to find one of these stands.  On the side of the road we saw a few grills and huge plums of smoke rising as the women were busy preparing something that smelled delicious. We went to investigate. The locals were surprised that we decided to stop by and were more than happy to describe all the veggies, meats that were grilled. We didn’t know what to take and told them to go crazy and just pick out whatever they wanted. We ended up getting a few pounds of food that cost a meager $2. All of it was wrapped to go in banana leaves and placed in a plastic bag with napkins. We found a spot in the main square and proceeded to eat some of the most delicious beef, grilled cheese and veggies. An absolute feast! 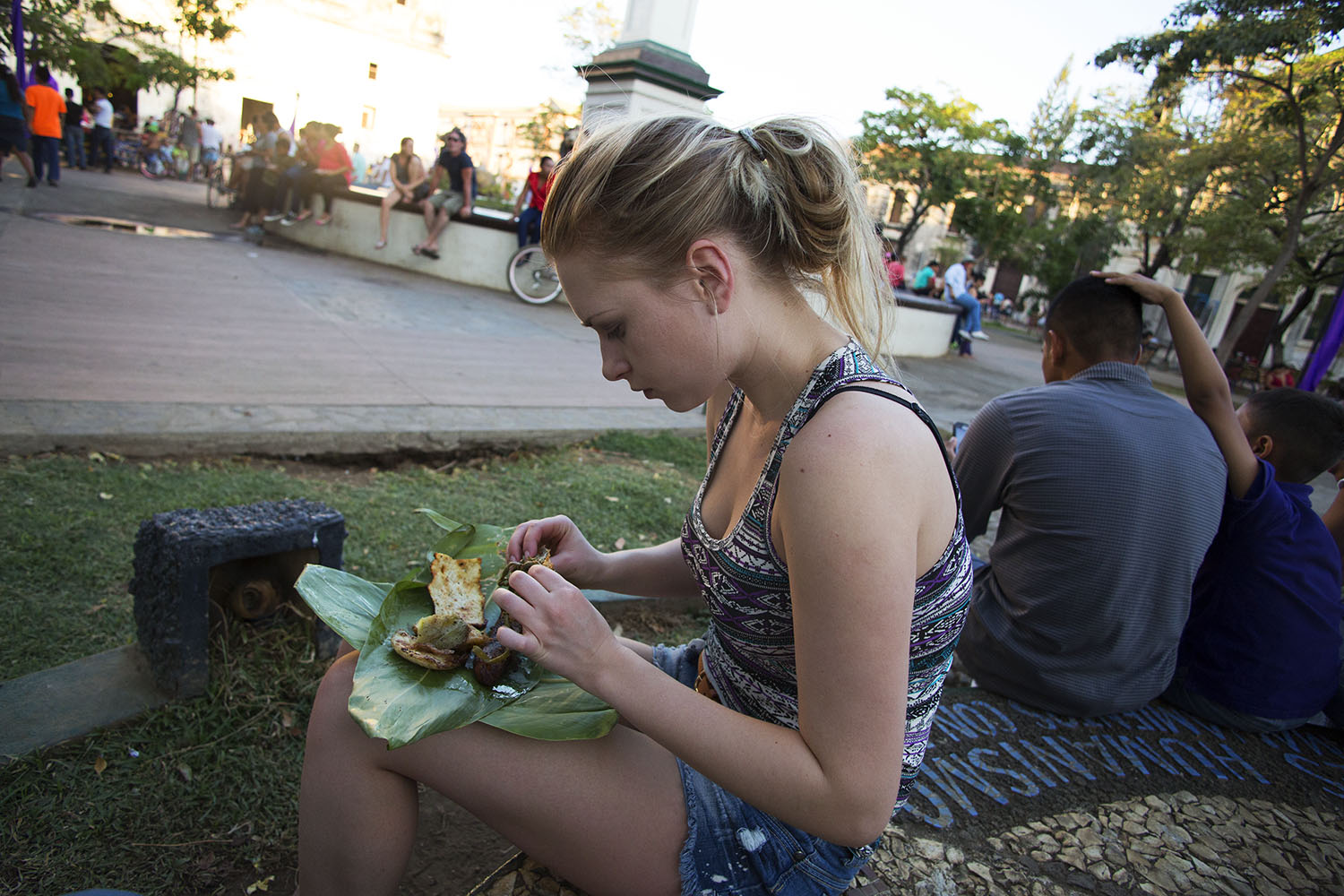 If you ever make it to Leon, you absolutely MUST visit the revolution museum. Visiting Museo Historico de la Revolucion was one of our highlights in Nicaragua.

A little history behind this decrepit looking building; The building used to be the former Palace of Communications of president Somoza but was taken over by the Sandinistas during the war. It was the site of a number of shoot-outs with Somoza’s soldiers and the building is still riddled and pot marked with bullets and shrapnel. 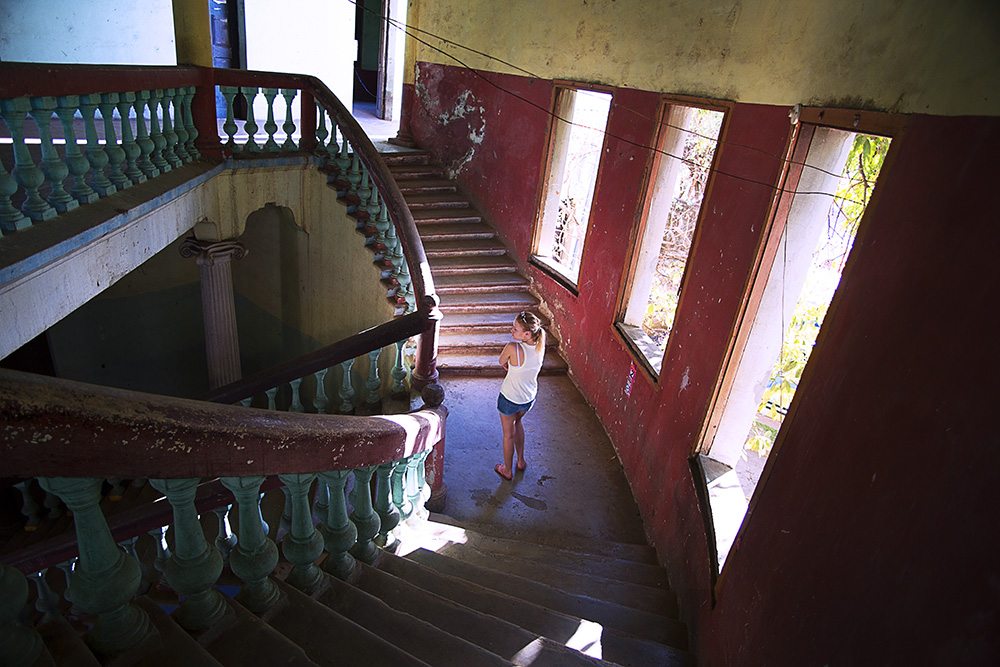 No war museum can replicate this place as you walk through the empty rooms. Silence fills the air and you can’t but imagine the numerous shoot outs that occurred between these walls. There are no artifacts in the museum apart from slabs of pavement that were used to erect walls and a few empty casings. The walls in the main room are covered in newspaper clippings and photographs and as you walk you can’t help but realize how lucky one can be to avoid war. 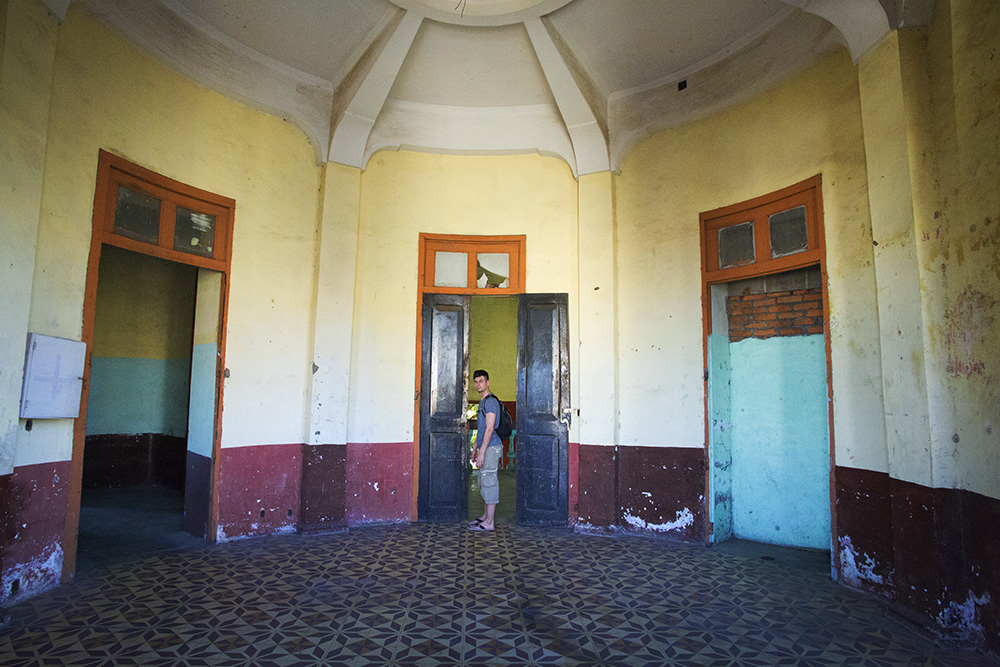 The war to overthrow Somoza’s dictatorship ended thirty years ago but no restoration has been done to this building. We wandered completely alone, lost in our thoughts. As I made my way upstairs and couldn’t help but notice that from the second and third floors it was easy to set up machine gun nests to control the various intersections that led to the square. Bullet holes in the walls behind the balconies attested to this fact. No museum can replicate the horrors of war. To walk in these haunted rooms with rays of light streaming in was the epitome of our time there. 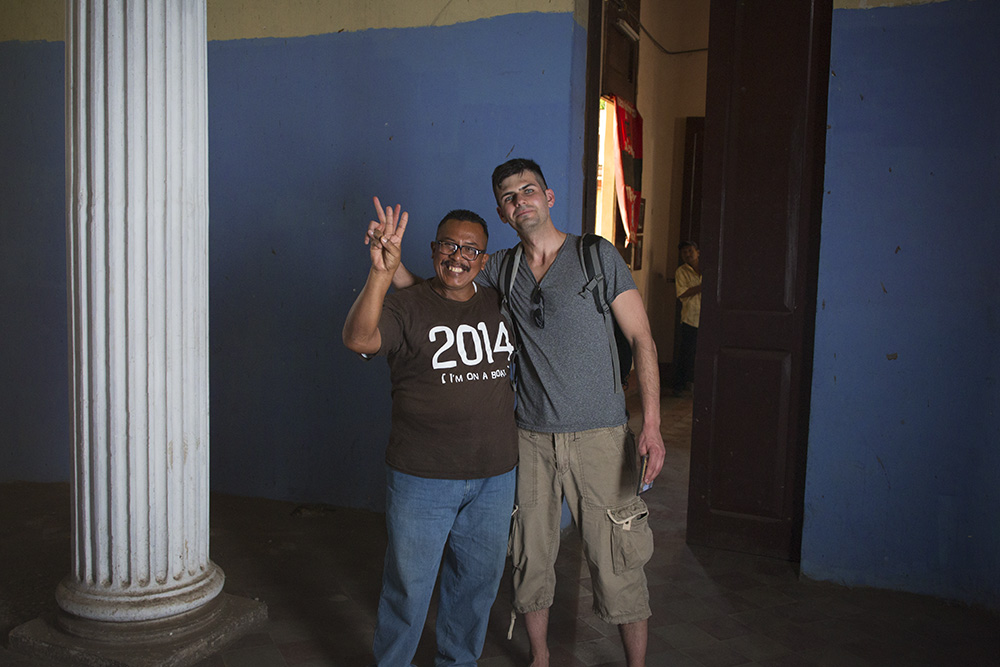 We made our way back to the first floor to read more extensively about the events and there we met Carlos. He works as a guide in the museum and he led us to the stand with pictures of fighting in the streets. He pointed to a young, gnarly young kid with a big mop of hair and a machine gun slung over his shoulders and proudly said “That’s me in 1979”.  Carlos took the time to explain why the revolution happened and what led to it. His voice quivered when he spoke of the 50 thousand that lost their lives in the fight against dictatorship. Upon learning that we were Russian, he hugged us and was happy to pose for a picture. As we bid our goodbyes and went  out into the busy streets of honking cars, laughing children and couples holding hands, I turned around and saw a huge FSLN flag beside Nicaraguan flag wavering in the wind. These people fought for their freedom and the freedom of their kids and their sacrifice can never be forgotten. 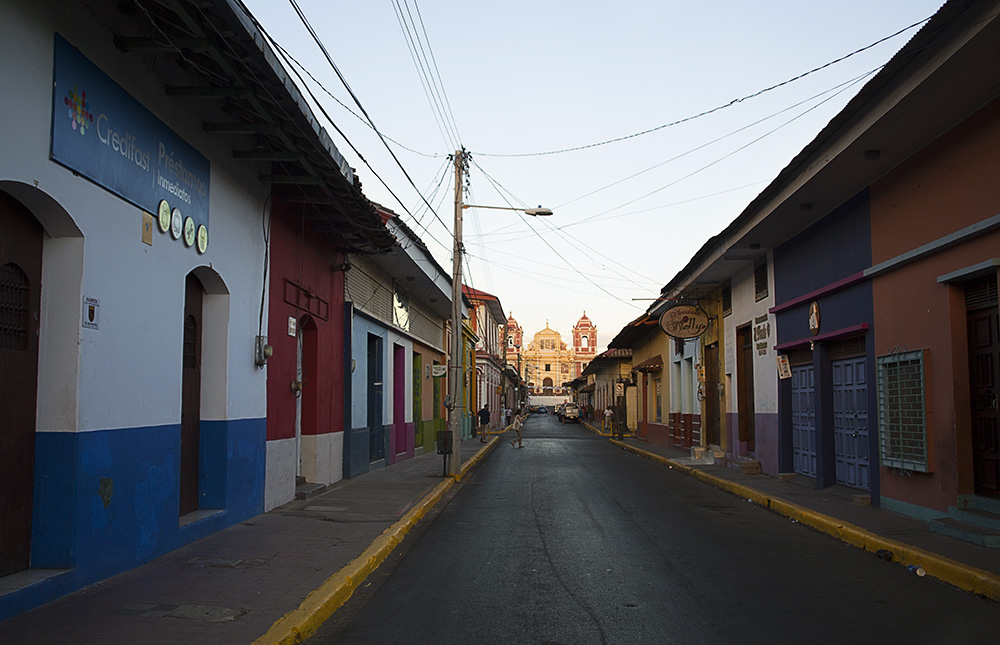 Leaving Leon was actually harder than we expected because we fell in love with its turbulent past, the colossal churches and friendly people. I highly recommend visiting this beautiful city before it becomes a tourist hot spot and loses its individuality. Stay tuned for more adventures as we ride down active volcanoes, explore Granada and get lost on Mombacho Volcano.