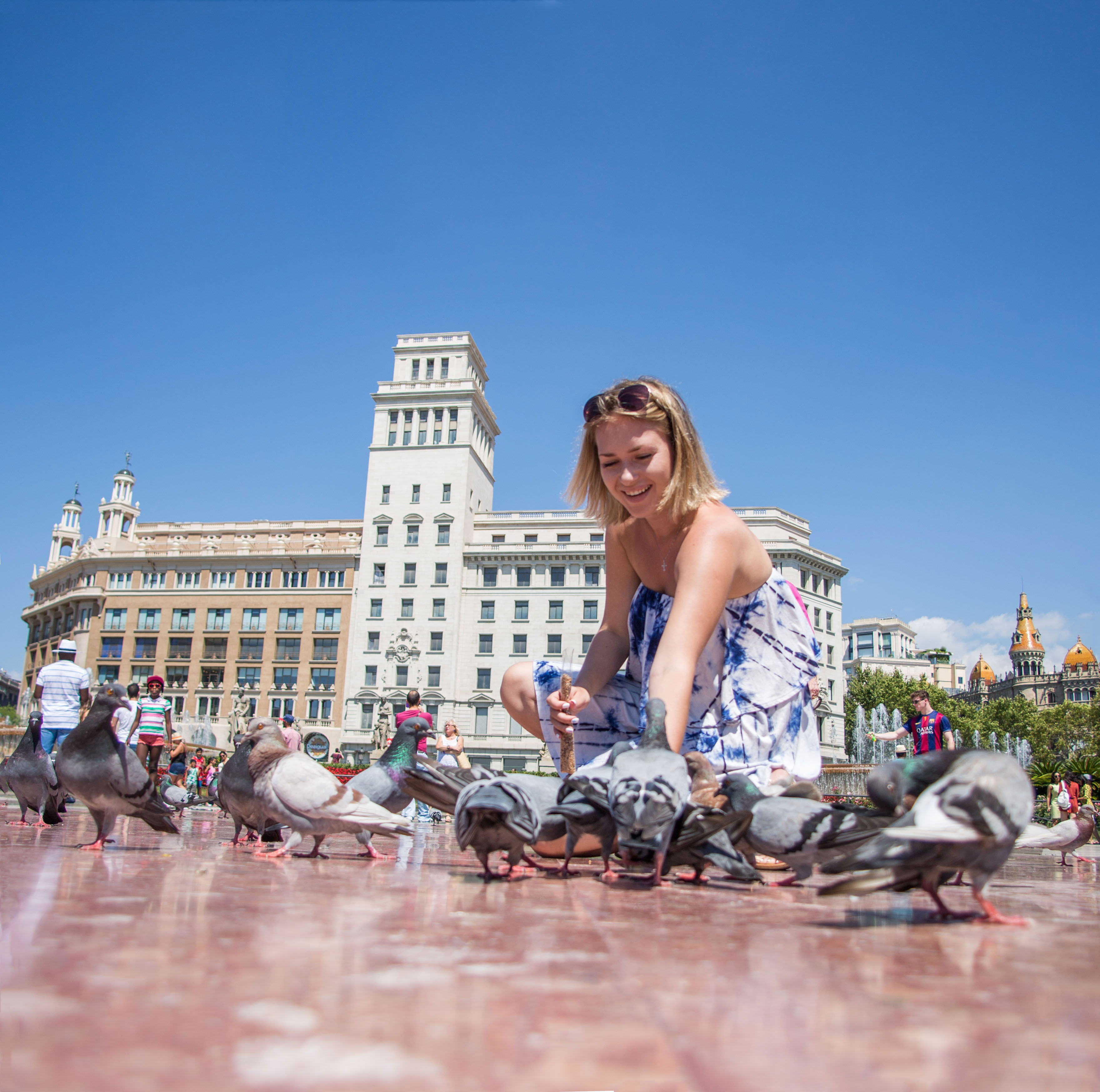 The land of Paella, Gaudi and unique architecture.  Barcelona is a city of contrasts. Some people are in love with this vibrant southern city yet others absolutely detest it. 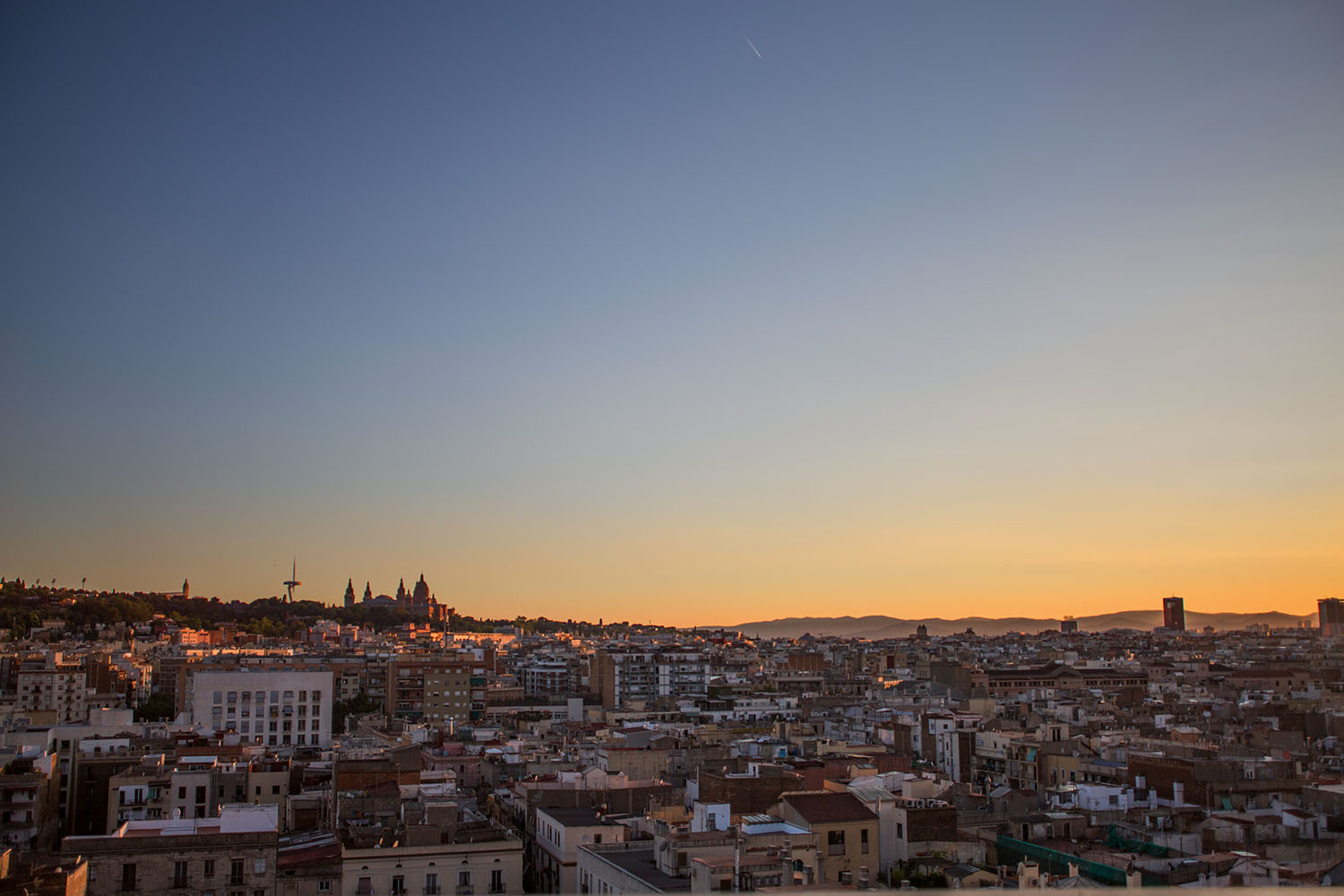 Raval is Barcelona’s historic core and with Gothic quarter nearby, beaches, restaurants and theaters, it is where you want to be as a first time visitor.

Unfortunately, all is not rosy in Raval.

We stayed in Raval and while the hotel and the location were amazing, the same cannot be said of the neighbourhood. Dirty streets with rats scurrying around, drug addicts laying in the streets and trash everywhere. Crime is rampant in this tourist hot spot and you should really be careful with your belongings. Recent immigrant surge to hit Europe can be seen in all of its glory with police chasing and beating the illegal vendors all day long. We have witnessed two robberies in broad daylight. 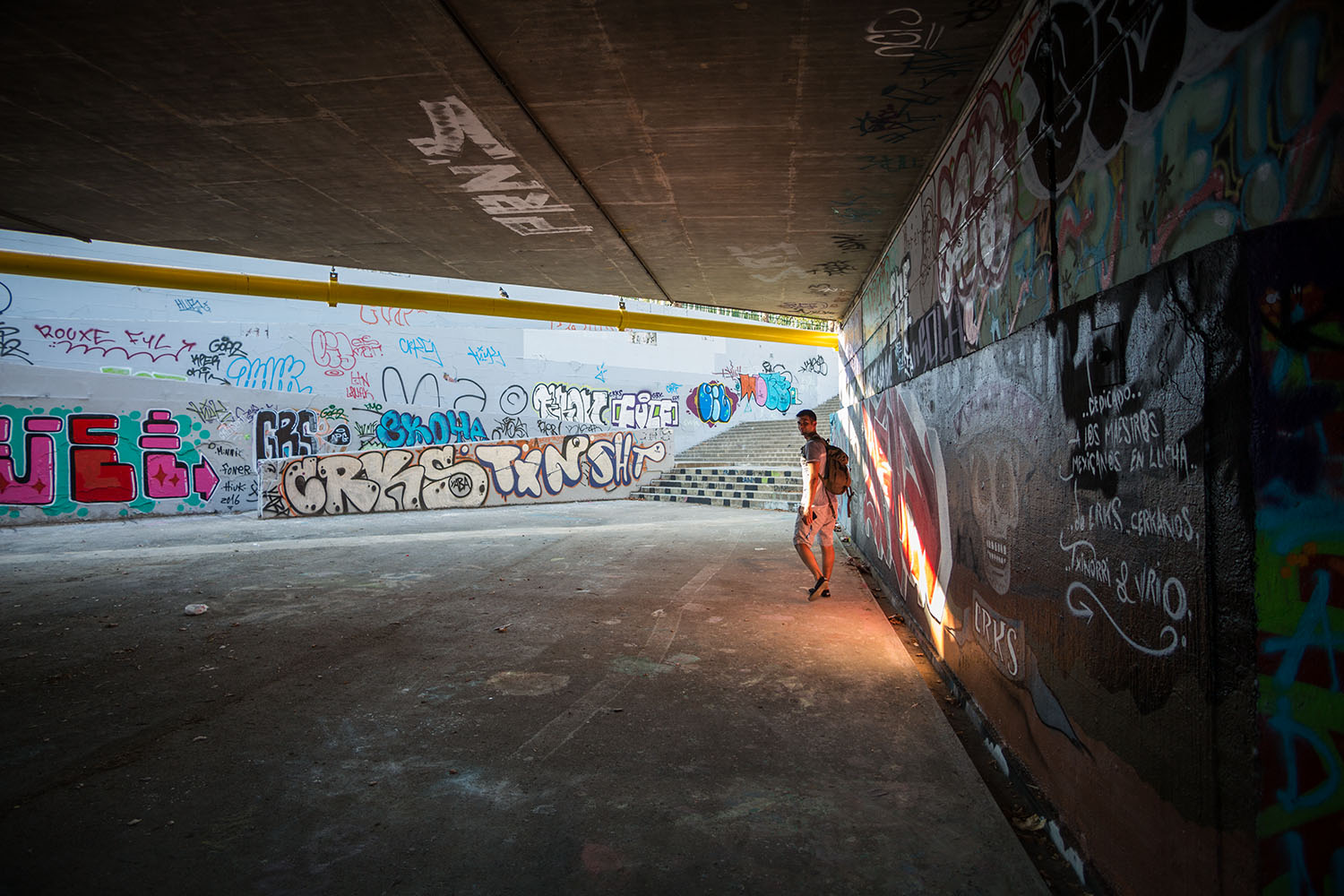 Barcelona is a buzzing city with amazing restaurants that serve some of the best paella in the world, world famous art installations and lots and lots of Gaudi. In fact, majority of tourist souvenirs center around his creations.

Despite the negativity and the downturn economy, there is still plenty to do and keep you busy. 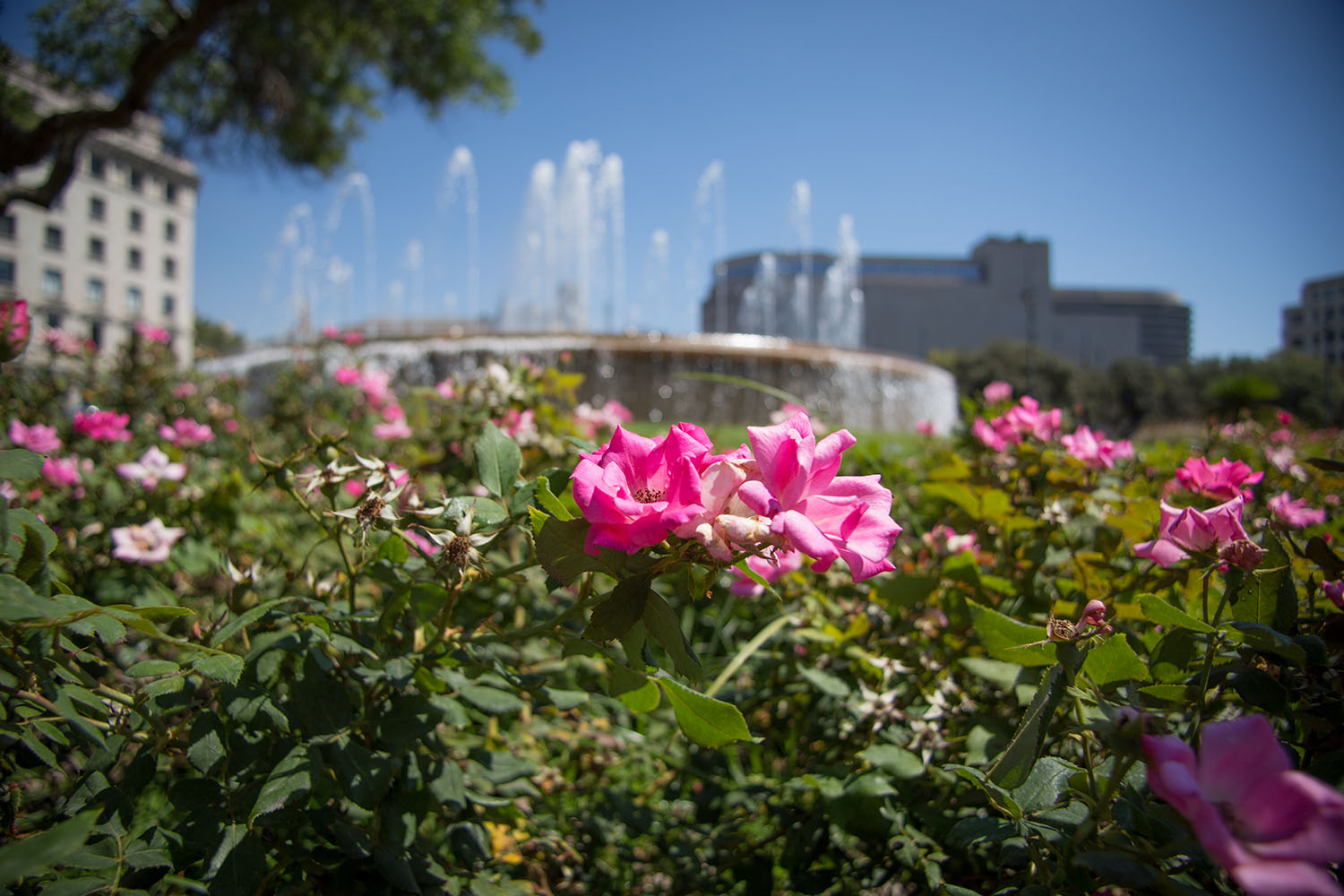 A mere 10 minute walk from the most famous boulevard in Barcelona (La Rambla) there is the Plaça de Catalunya. It is Barcelona’s most central area and a favorite meeting place for locals and visitors. It also connects the Eixample and the old town. Some of the best shopping in Europe is found here. Large trees provide plenty of shade during the hot days. You can also buy some bird food and feed the pigeons. If you do, there will literally be thousands converging on you in seconds. 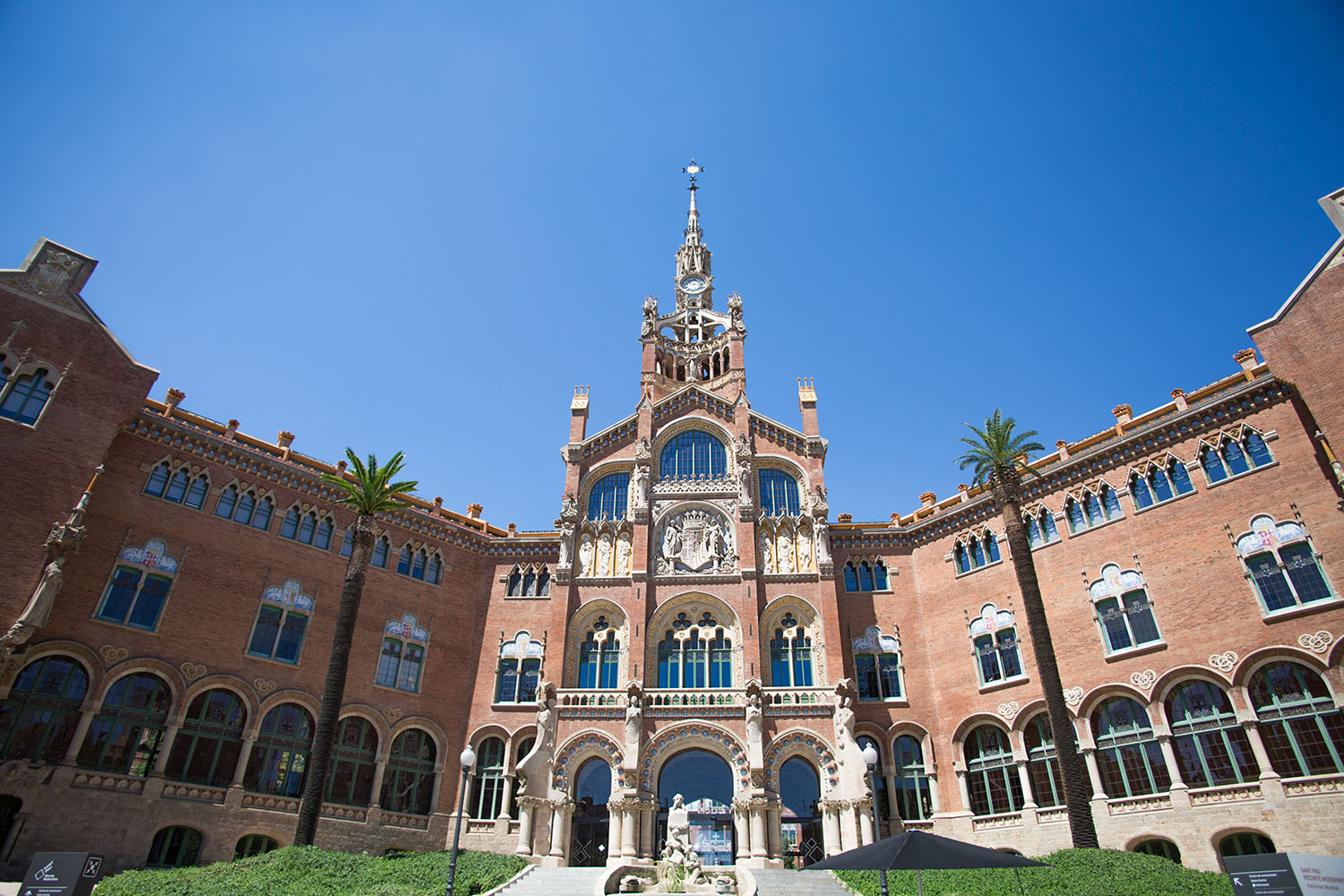 A former hospital that is Europe’s foremost art-nouveau complex. A visit to this complex is worthy of your time. The pavilions, set among gardens and connected by underground passages, are breathtakingly beautiful and a showcase for the applied arts, featuring sculptures, stained glass and mosaics. It also shows Gaudi’s influence on other architects.

Basilica of the Sagrada Familia 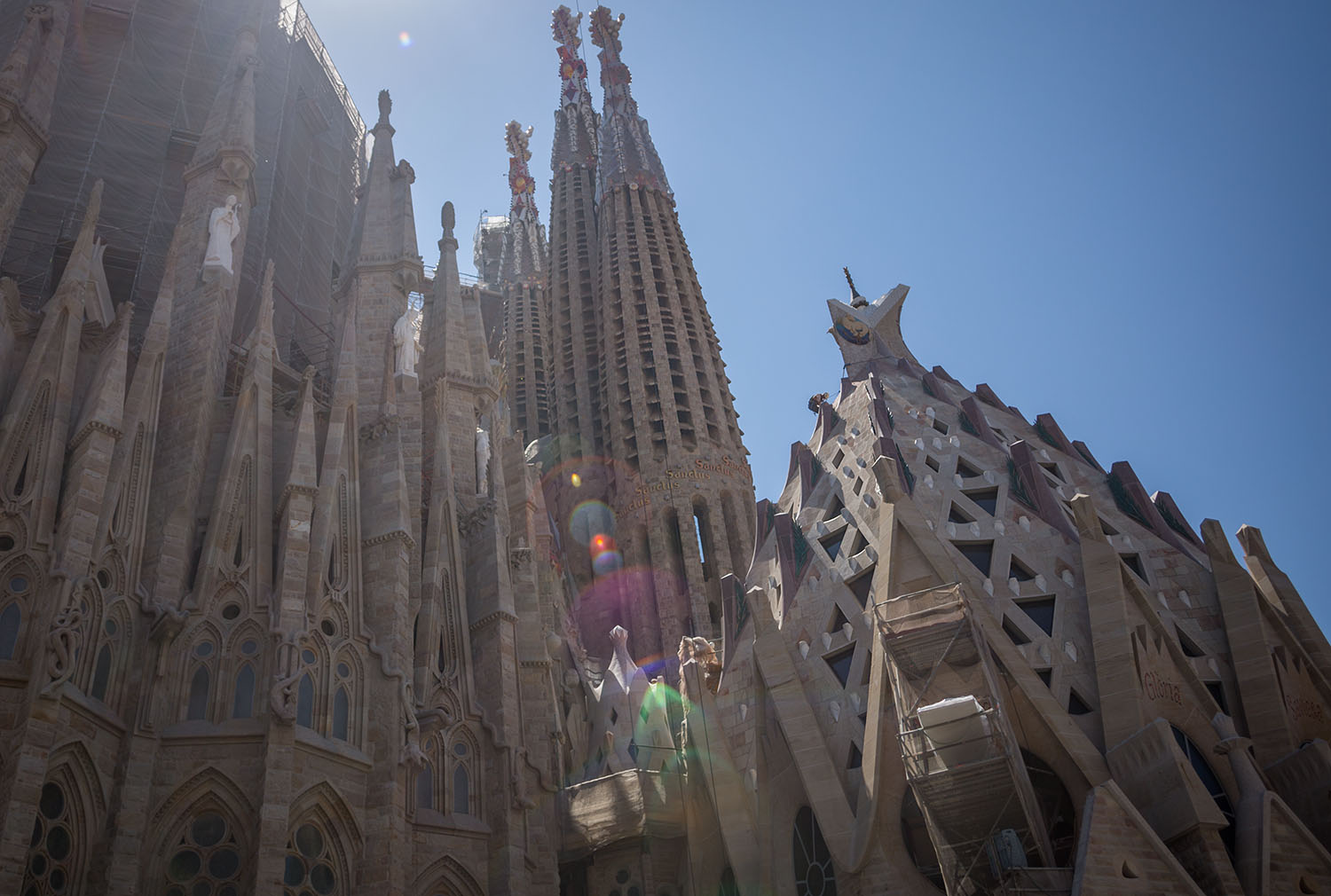 One of the most famous basilicas in the world, still not completed. The most ambitious work of Gaudi, it is the biggest attraction in Barcelona. Tourists converge on the church at every hour of the day and it is difficult to get around all the human traffic. The expected completion date is 2026, exactly 100 years since Gaudi passed away. You can get to the top of the basilica by climbing or taking a lift to one of the 4 towers. The sheer scale of the project is simply breathtaking. There is a park nearby and we found it is better to admire the basilica from there. Less people too. 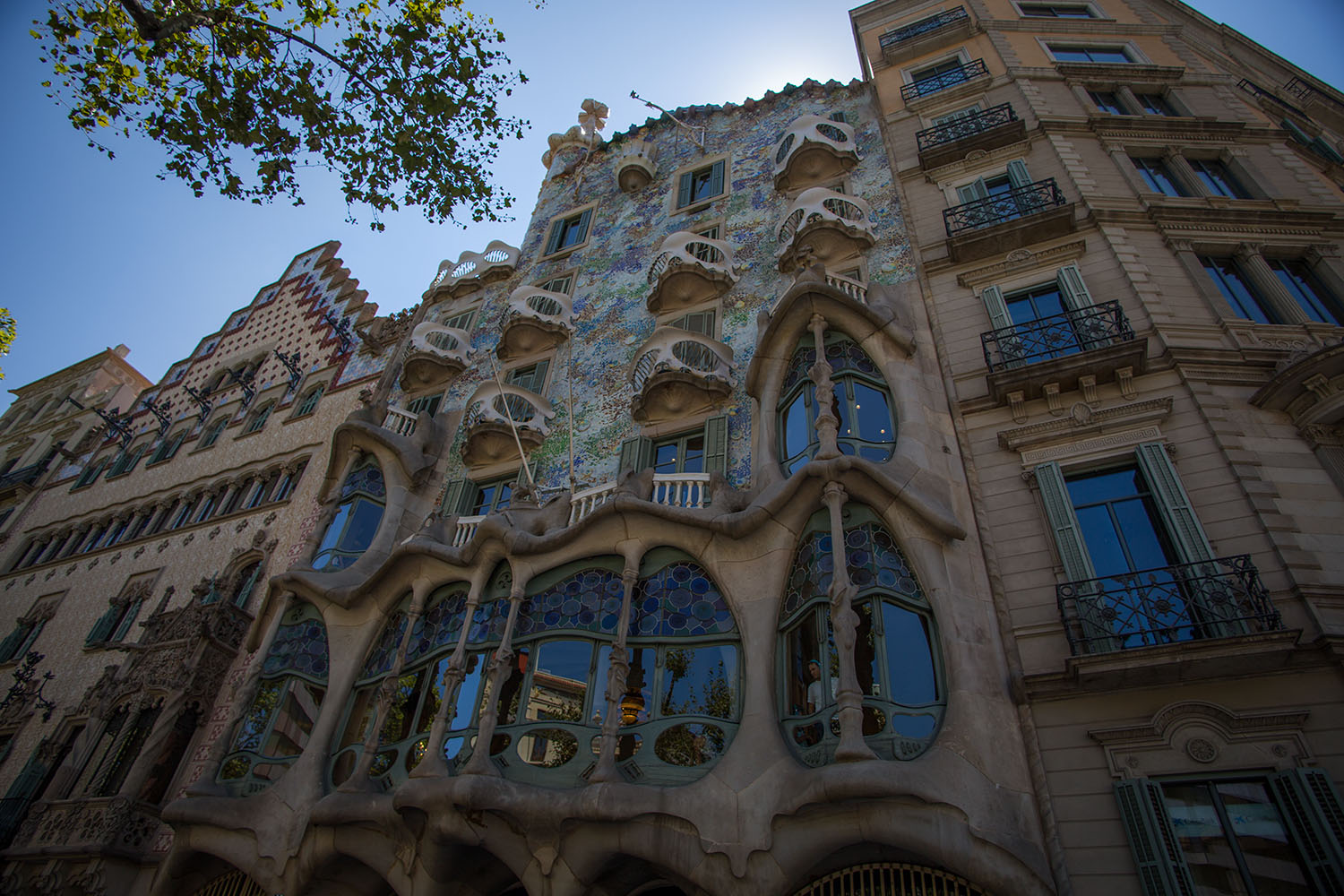 While walking on the quiet picturesque streets of central Barcelona you can’t miss Casa Battlo, the house that resembles a dragon. Located on Passeig de Gràcia, this house stands out from afar and no matter how many times you see it, walking by without being left in awe is next to impossible. A UNESCO World Heritage site,  Antoni Gaudí’s architectural masterpiece and an iconic modernista landmark. You can get an audioguide and go for a 1 hour tour of the famous Batlló residence. 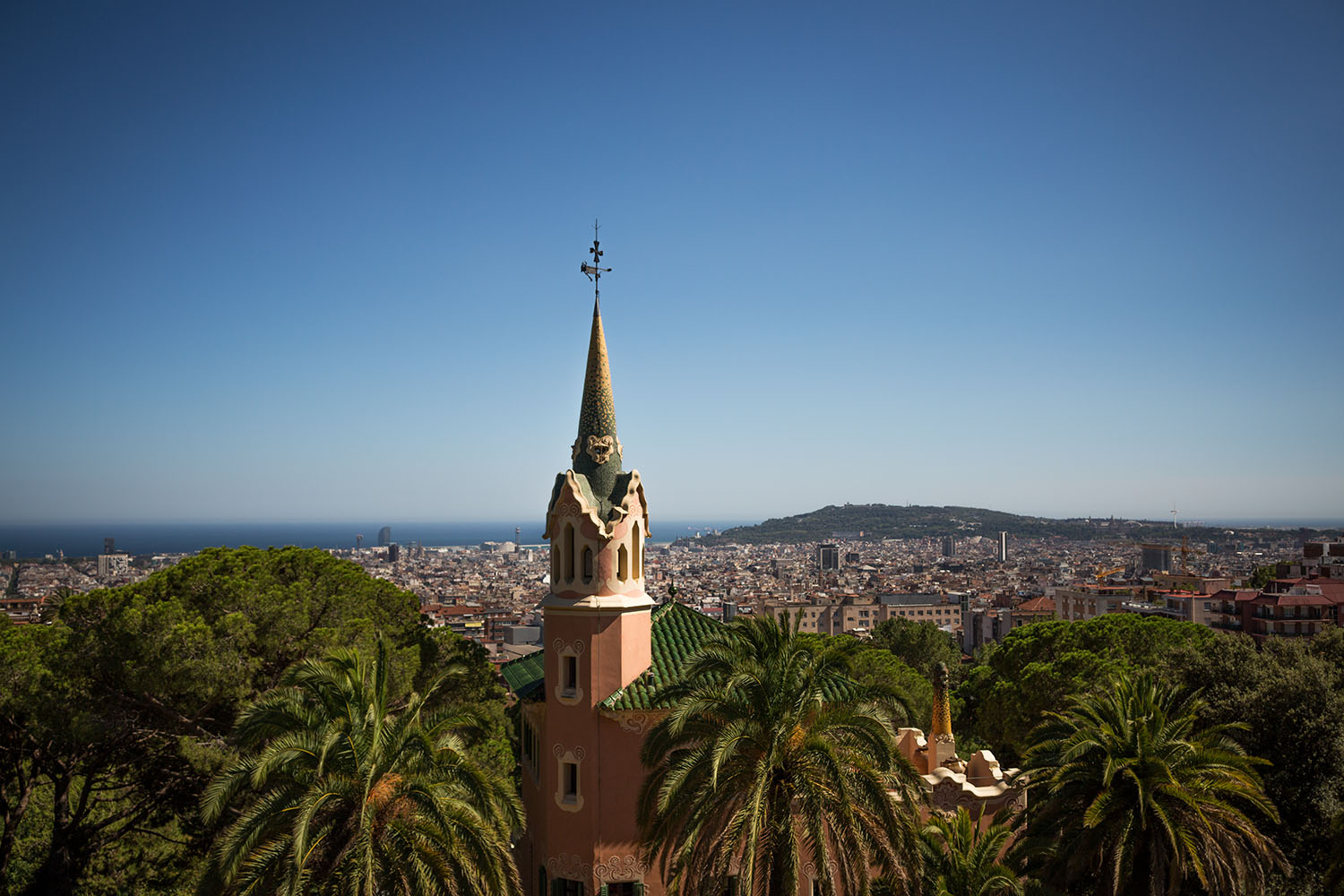 Park Guell is where all the Gaudi action happens. The giant lizard, the cinema and odd looking buildings are all there. The harmony between nature and architecture is captured brilliantly by Gaudi here. The visit to his home, which is now a museum is a hot commodity. Monumental area of the park has limited capacity and you should buy your tickets in advance as the wait list can stretch to hours.  If you didn’t get in, don’t despair, head down the street to G Experience. It is a 4D cinema that shows a film on Gaudi. Totally worth your time!

Barceloneta Beach is located right at the front of La Rambla. So you can go shopping, eat and then end up at one of the oldest beaches in Barcelona. There are amazing art installations on the promenade, the restaurants on the shoreline have fantastic (overpriced) seafood dishes and lots of beach volleyball matches.  The beach does get overcrowded and it is not the cleanest as well. There isn’t a lot of shade too so you will either have to rent a beach umbrella or get an extra doze of vitamin D. 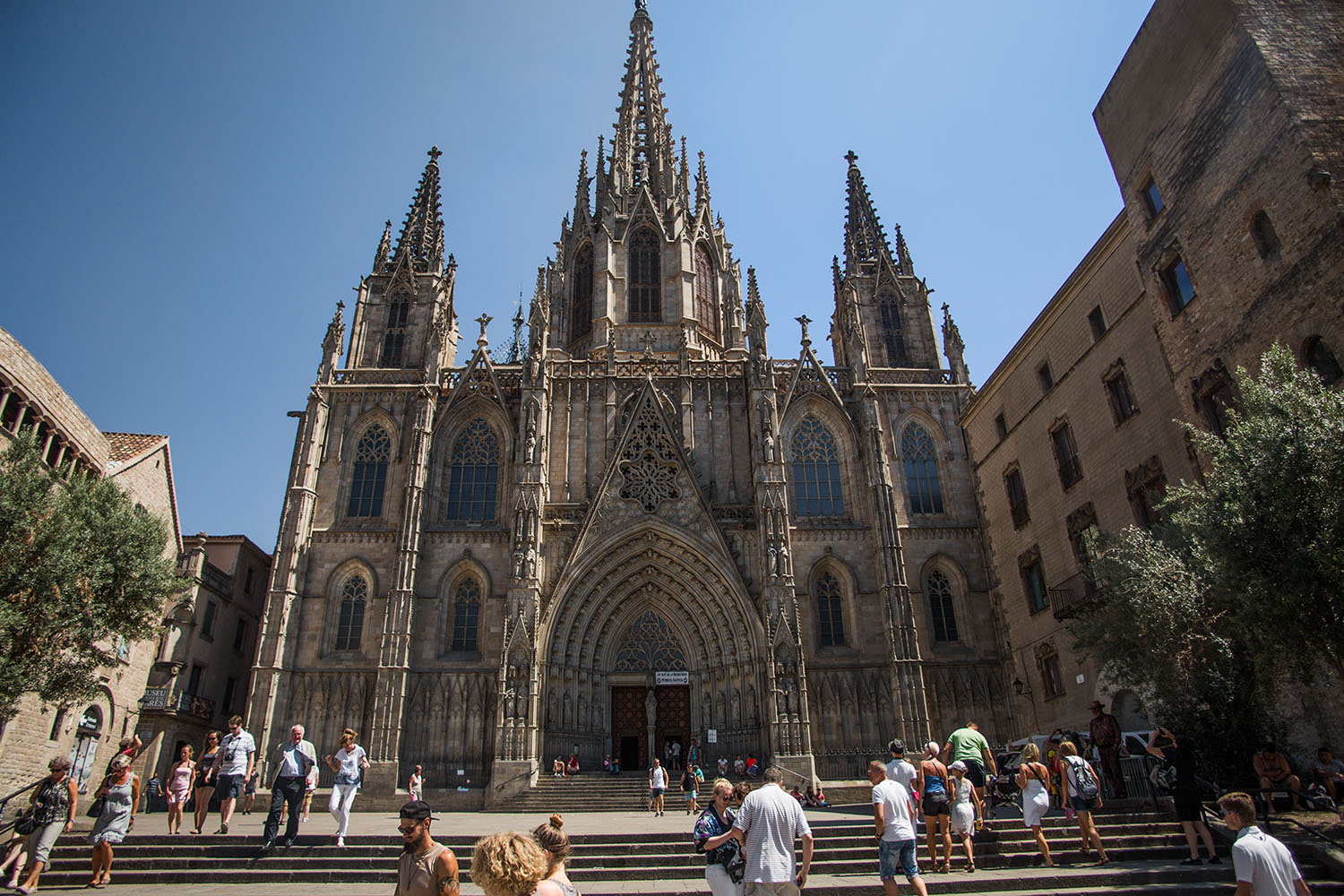 A must visit part of the city. Why go to Rome, when the Roman civilization left its imprint on Barcelona? The Gothic quarter is where you can stroll past the temple of Augustus, baroque churches and medieval squares. It seems that through the ages, Barcelona kept the best pieces of the puzzle to form its identity rather than strip away and start anew. Check out the bars that serve locally brewed beer too! 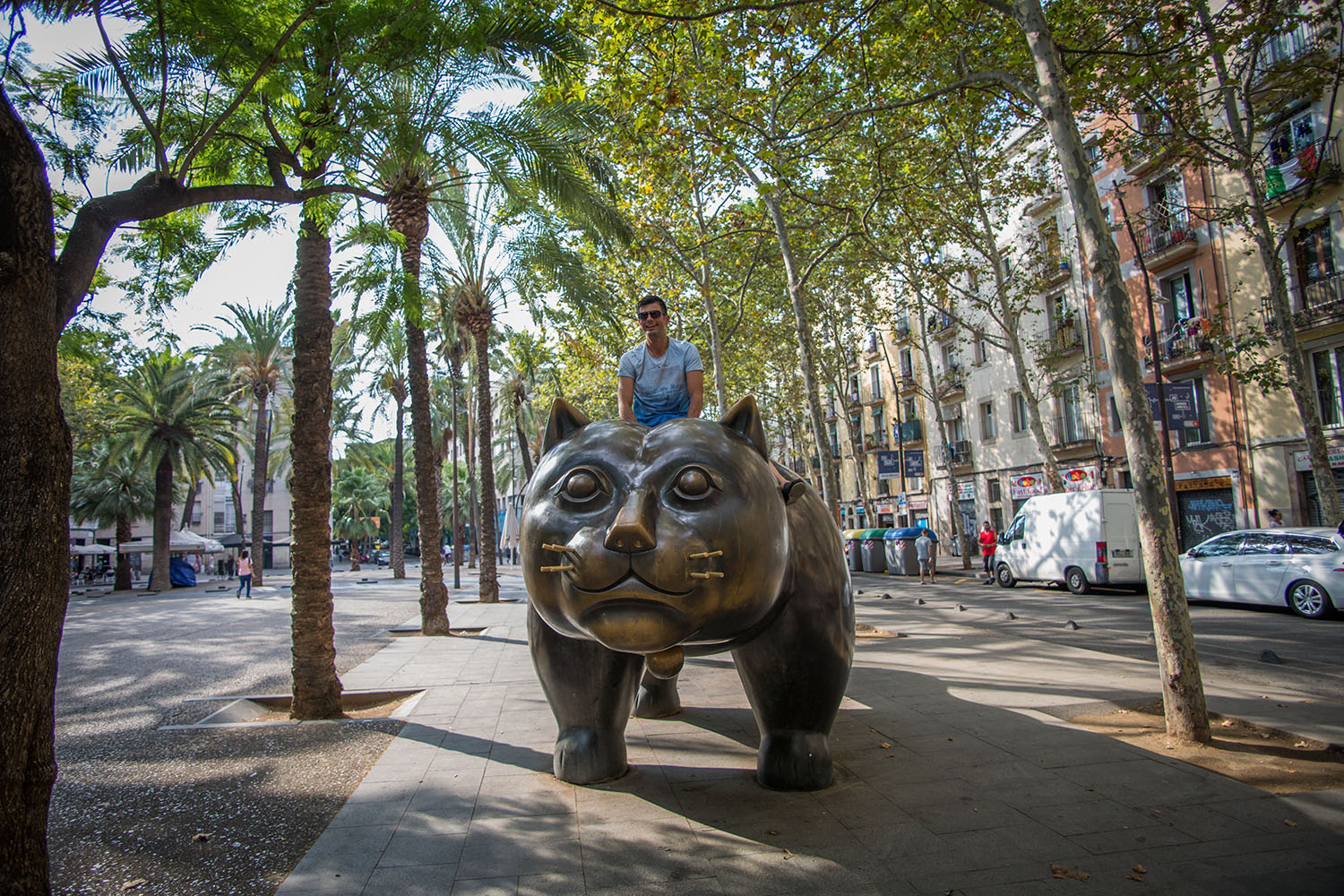 Fernando Botero’s second most famous piece. If you make your way to the Rambla de Raval, and follow the streets to the end, the cat will be waiting for you with a smile. Like all Botero’s creations, the cat is larger than life. If you decide to climb the cat, do so early in the morning because the metal heats up during the day and you can get yourself a nice burn to take home. 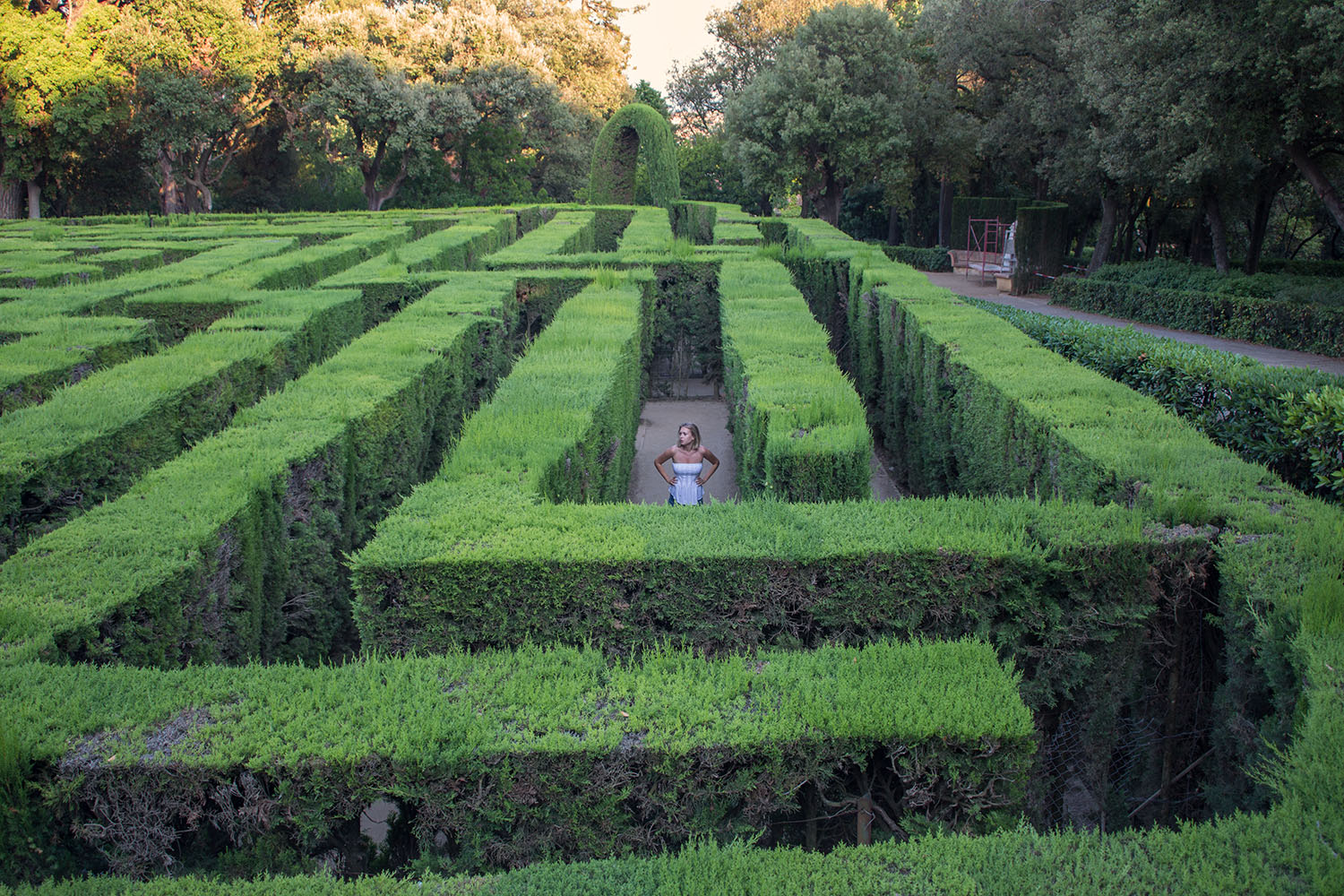 The park is challenging to get to both totally worth the time and effort to visit.  It is Barcelona’s oldest garden and was designed in 1792. Apart from the gardens, there is a harmless looking yet challenging maze made out of cypress trees. Highly recommend trying to complete the maze the first time and then retracing your steps the second time. It is not as easy as it looks! 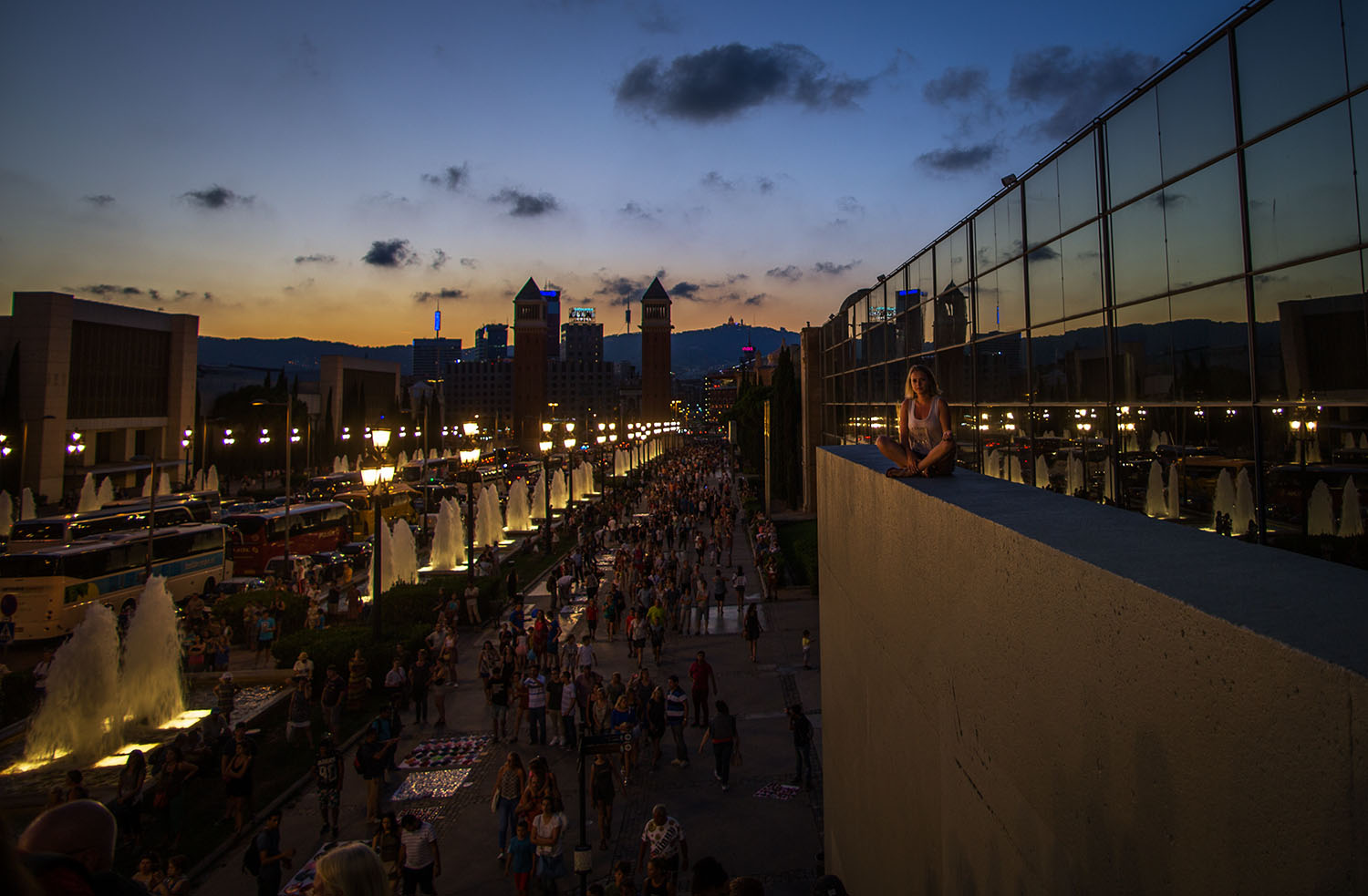 The musical fountains start with sundown (check the start times here ) on Thursdays and Fridays and it is totally worth the time to see. Like everything in Barcelona, it took a long time to build but unlike the Segrada, the fountains were completed in 1929. Try to get to higher ground because the lineups will be huge and come early because you simply will not see the fountains behind a wall of humans.

Be careful of the pickpockets working in this area. 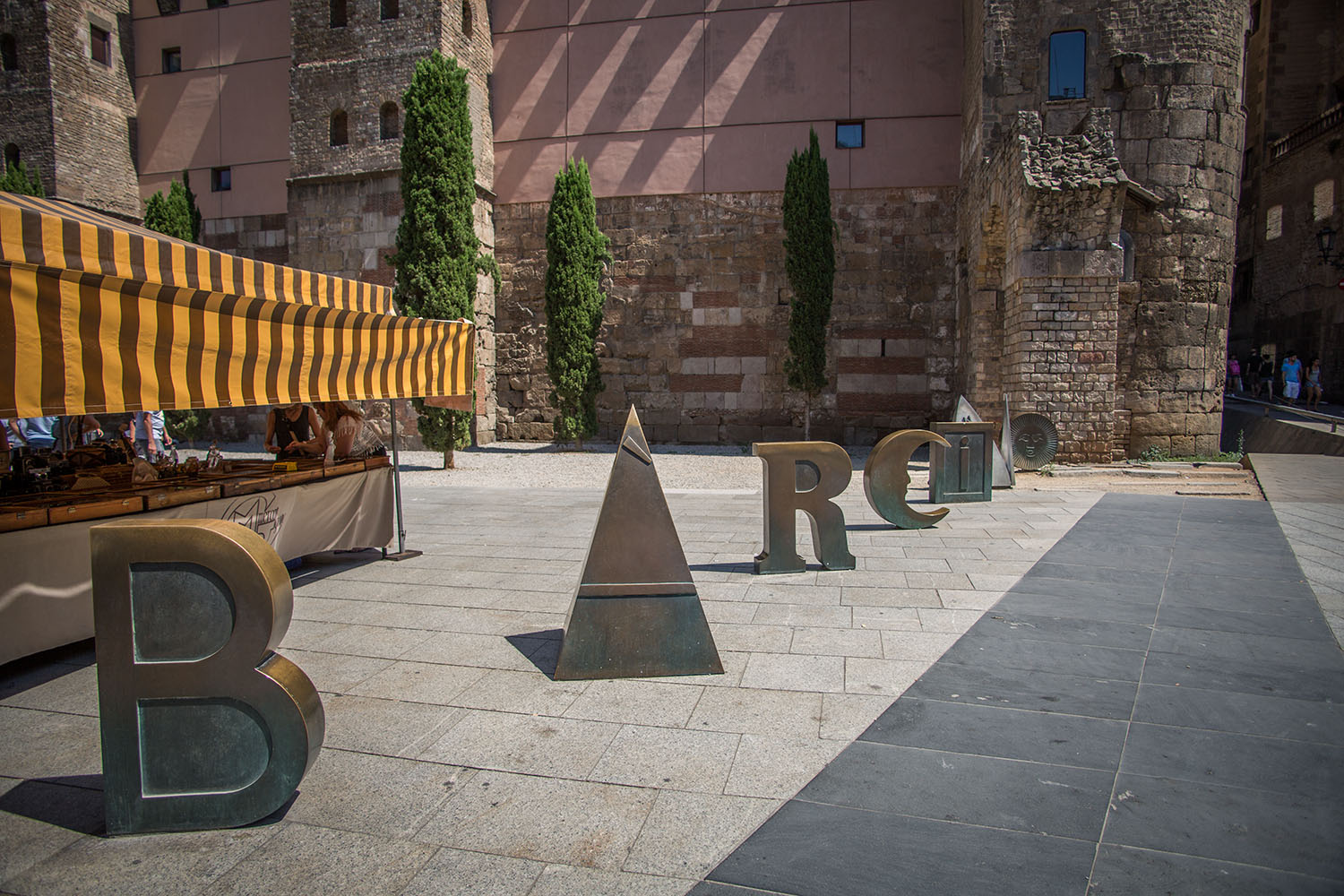 So what is Barcelona? A cocktail of cultures, eras and religions that meshed perfectly to create a unique and extravagant city that has no equal. The people are friendly and fiercely proud of their Catalan ancestry. The food and ambiance is superb and if you have a few days to explore, you will not be disappointed.