posted on November 2nd 2014 in Canada with 6 Comments 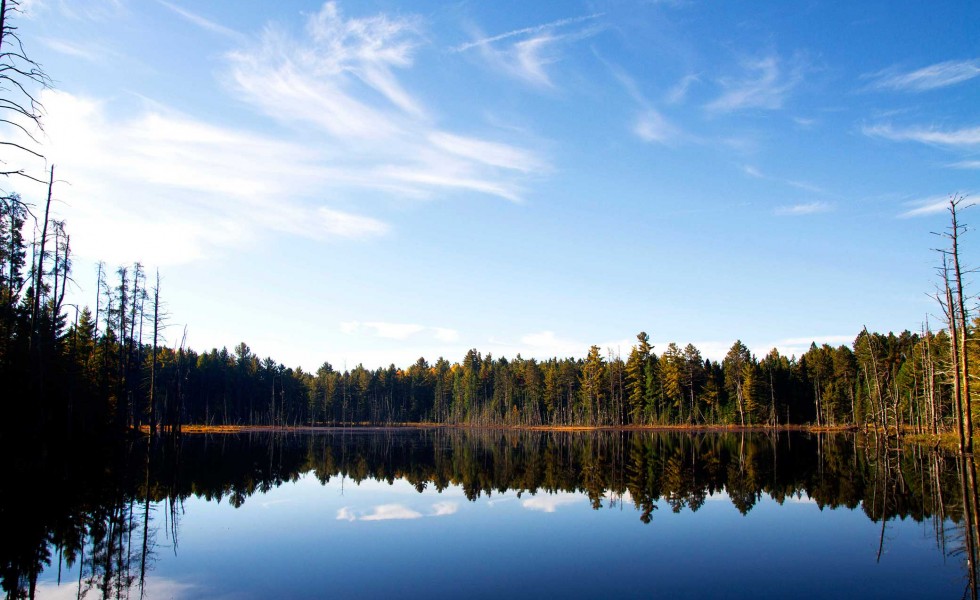 Algonquin has always been a mystery to me. It’s vast expanses of land, remoteness and lack of roads have always beckoned me. Our friends have booked a ranger cabin for the weekend and without hesitating we agreed to join them. The park has 12 cabins that were used as hunting stopovers and park rangers abodes. We were going to Bissett Creek cabin that had car access.  The cabin was built in 1922 and in 50’s was rebuilt to accommodate tourists. To get to this piece of history one needs to undertake quite a trip. For us it was a 6 hour drive to North Bay and then along highway 17 to Bissett Creek road. 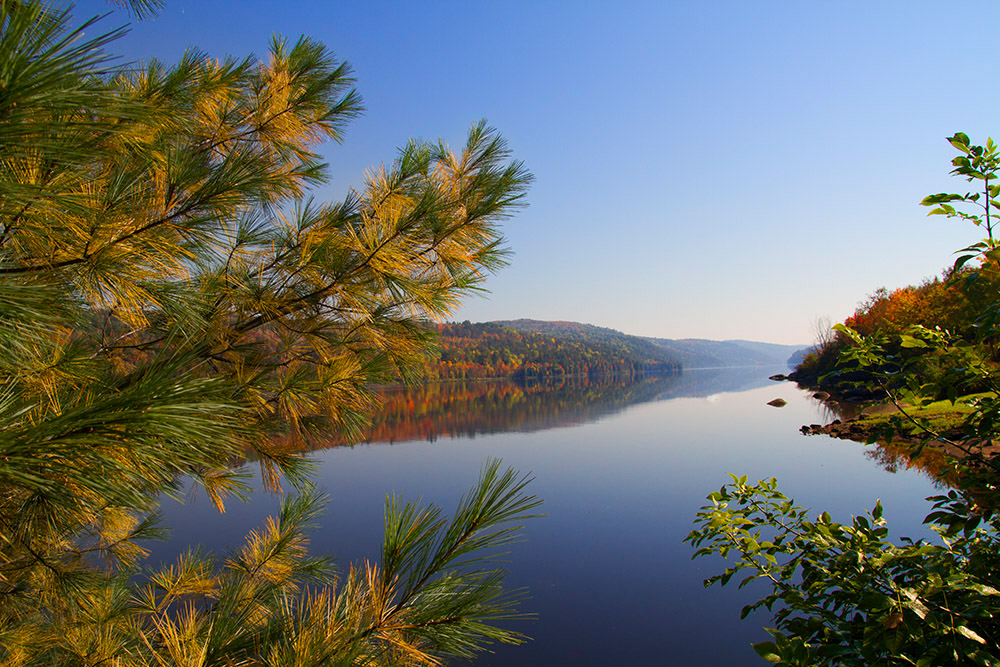 Due to lack of summer, this year was visible on wide array of colors of foliage. Trees were eager to forget this cold year and were changing colors in spectacular fashion. Driving north we were greeted by a new spectacle of dazzling colors around every bend. I have wondered whether people driving ever notice how beautiful nature is. How little is needed to fill the heart with peace and love. People want a miracle, a spectacle to be seen in order to believe but nature is providing it all the time. All we need to do is unplug from the hectic lifestyle that is shoved down our throats and smile at the awesomeness all around us. 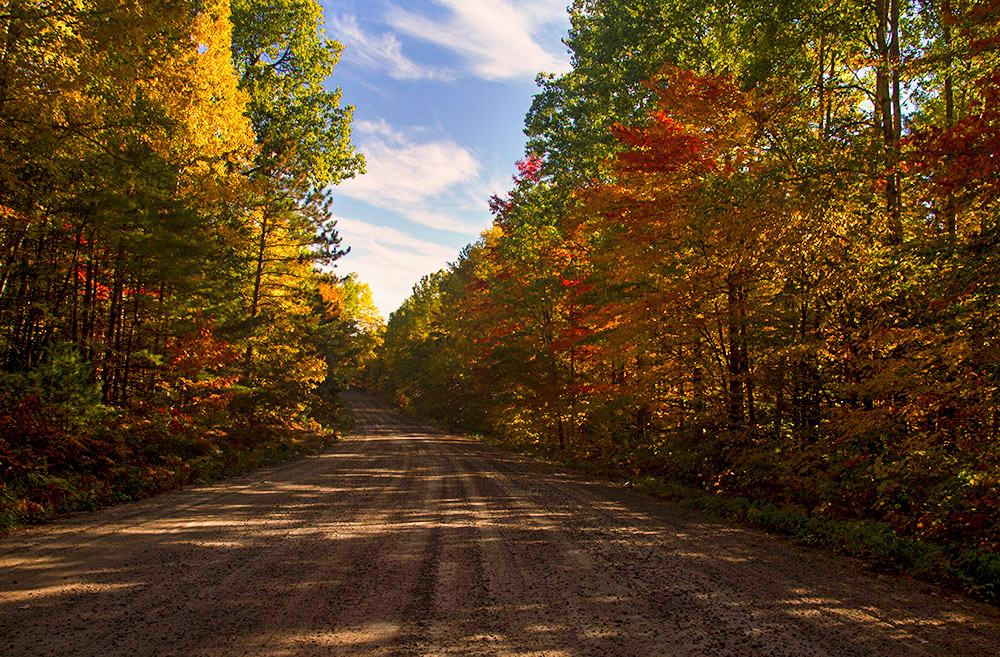 We stopped along our drive to take as many photos as possible. Each lake acted like a mirror reflecting the dazzling colors.When Ovid wrote Metamorphosis he mentioned Narcissus staring at himself by looking into the lake and he was so mesmerized by his beauty that he fell in and drowned. Looking at the reflections of the colors in the water it was easy to stumble and fall into the water as well. 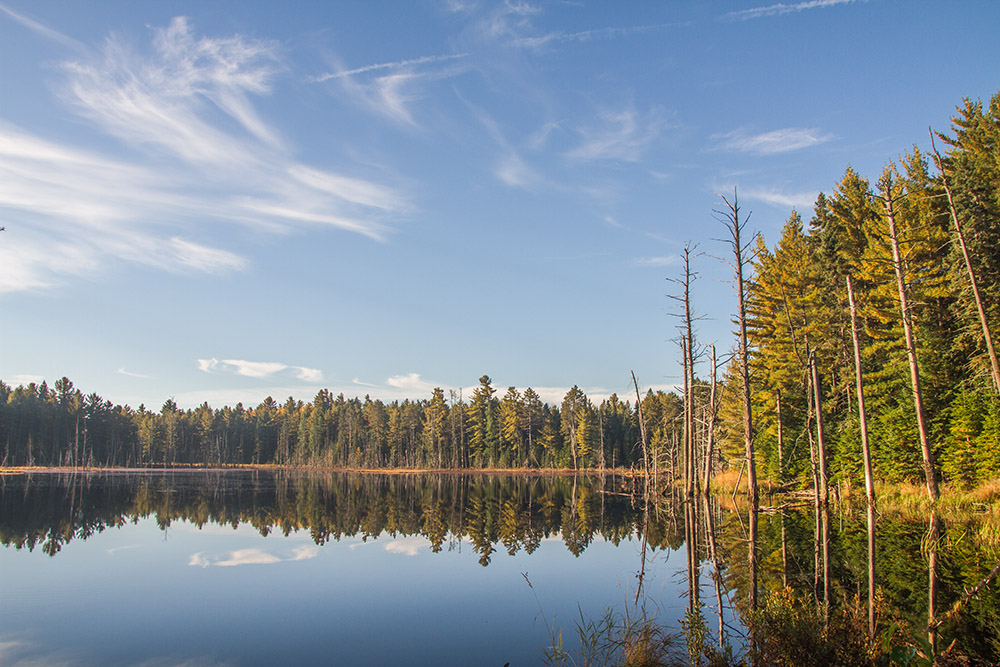 I got a Pileated woodpecker to pose for me for a while. Elena was driving and I was riding shotgun ready to jump out from the car to paparazzi whatever animal felt like posing for a photo. 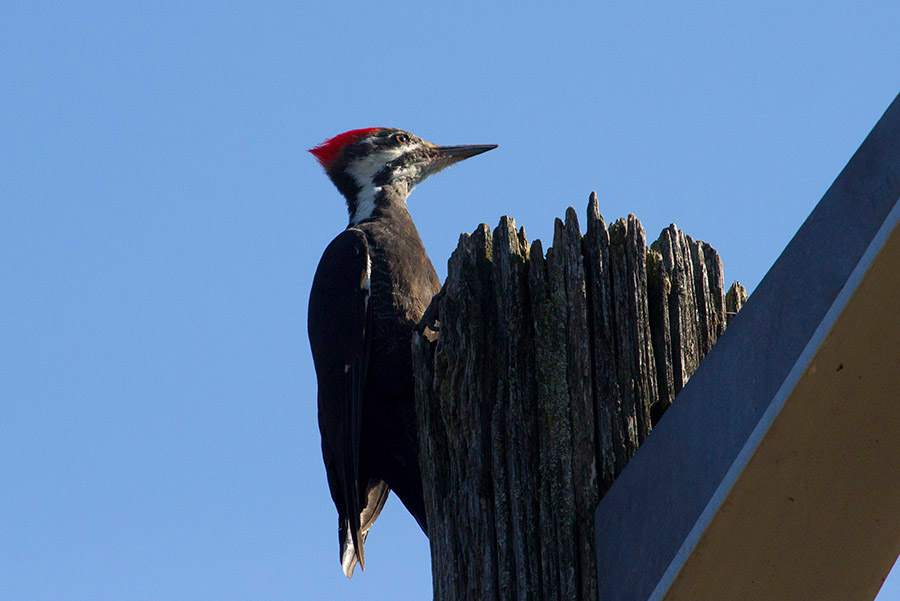 Entrance to Algonquin was non existent and we ended up driving 8 km past the cabin. No worries, as it allowed for more chances for us to memorialize the spectacular display of colors all around.

Our hand held radios came handy as we would have been driving around and photographing until sundown and then end up sleeping in the car. We turned around and drove back until a sign was found to the cabin. The path that led to the cabin was carved out between majestic white pines and I felt that my car was intruding their peace and serenity. The path opened to a clearing and on top of a small hill stood a wooden cabin. 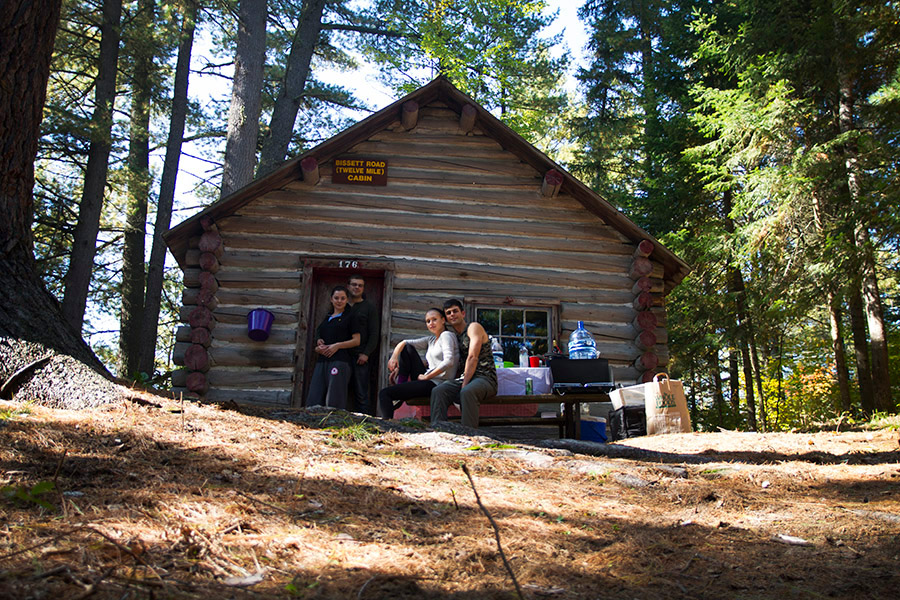 The cabin reminded me of Russian “izbas” houses that are very practical and are still plenty full in vast Russian countryside. It was reminiscent of a fairy tale abodes which can be both sinister and inviting at the same time. Inside there were two wooden bunks and a wood stove in the middle of the room. A table with a bench and a small cabinet summarized the decor but it was the notes that leave you speechless. 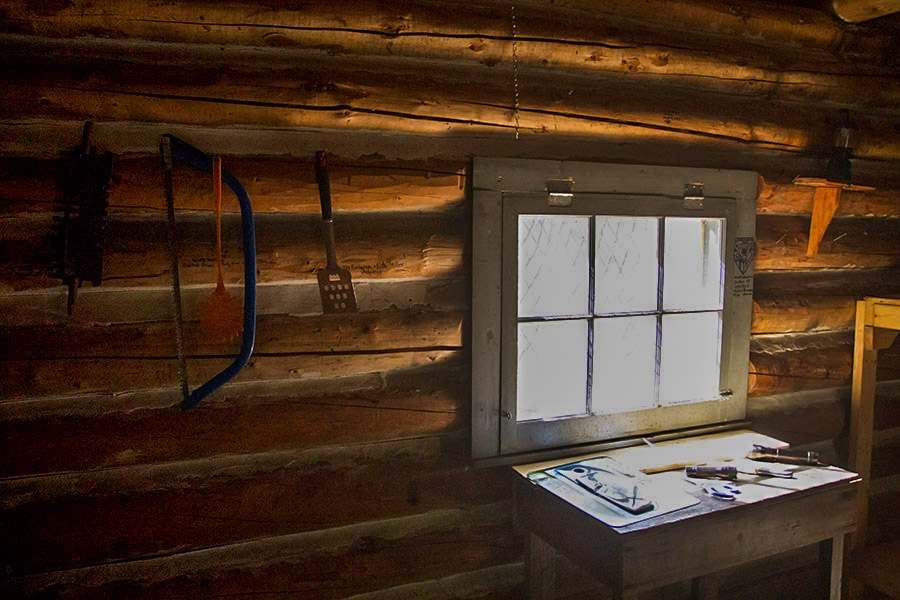 There were notes from travelers, loggers and rangers that spent time in this cabin. Notes from 20s, 40’s and on and on… I walked around with a flashlight trying to picture what these people experienced, what life was like for them when they stopped here. Notes from visitors as far as Colombia were left on the walls. They came from different walks of life, different eras and yet the cabin had united them all. 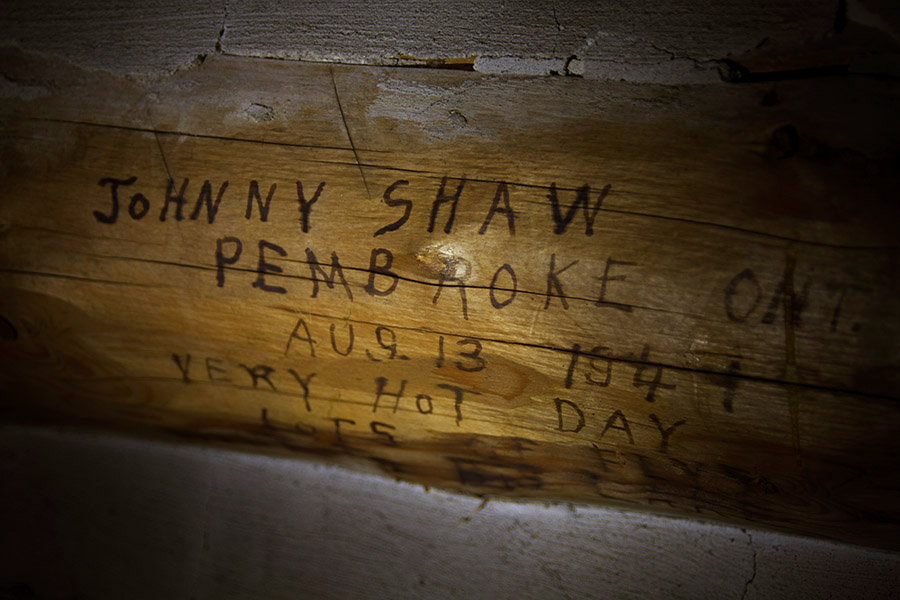 Their stay here allowed them to cut off their worries, their problems and just live. Some mentioned their inability to “take it” and thus forcing them to leave early. Words like “haunted, creepy, spirits” were unnecessary as families stay here with their kids. However, the cabin did have inhabitants and we met them at night…

We drove to Petawawa river and tried fishing in calm pools along the raging river. Bass and suckers were hitting the worms with ferocity but they were too small to be fried over the campfire so we released them all. Beside a small parking lot where boats were dropped into the water, there was a small hiking trail that we investigated. The path hugged the river and it was not extraordinary if it was not for two things; a car and stone chimneys in the middle of the woods. This car looked like a Chevy circa 1940’s. 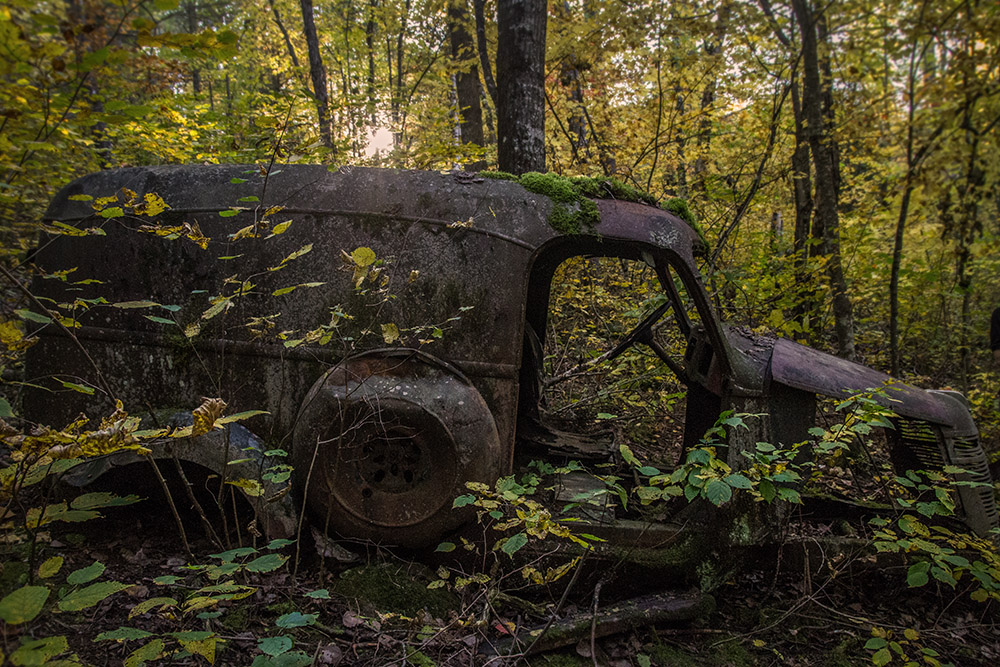 There were no roads around and the topography very hilly. How did this car get there? Why were the parts strewn 10 feet in front of it? It is a mystery that internet has been unable to answer to me as of yet. However, the oddities did not stop there… While searching for owls among thick pines, we found 5 huge stone furnaces.

Each being at least 18 feet tall. There were no signs of other structures around. No stones littered the ground, apart from some rusted metal in a ditch. I suppose the chimneys were used for making of bricks. Or not. In any case, I hope someone will shed light on why stone chimneys are in the middle of Algonquin park.

We spent the evening over the fire, looking at stars which glimmered like bright pearls and listening to wolves howling in the distance. Apart from the logs crackling in the fire, a blanket of silence descended with the night. The wolves were getting closer and closer. We decided that it was enough adventure for the day and retreated into the cabin. The stone furnace was heating up the cabin and we got ready for sleep. We woke up at night from mice running around the cabin. It was hard to judge how many called the cabin home but in darkness imagination made it seem like there was a mouse stampede going on. One brave lad decided to run hurdles right on top of us. Elena drowned a scream but kept quiet. We left a light on but this did not deter the little inhabitants of the cabin. I have to say that sleep was very hard to come by for the rest of the night. 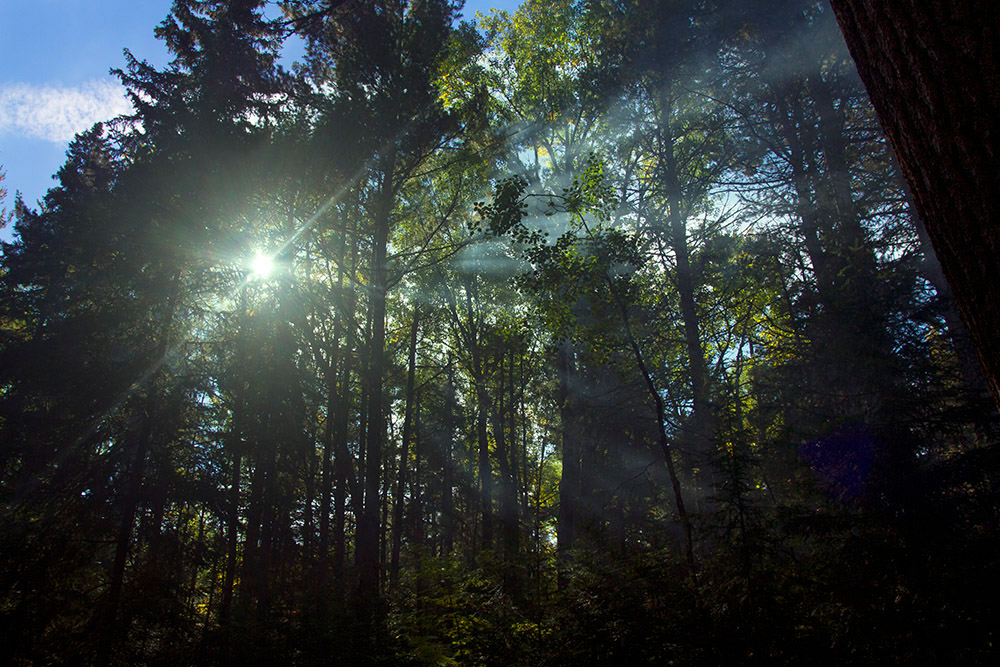 The next day, Elena had a photo shoot to do and my friend and I were going to explore the woods. While driving, we saw a black bear effortlessly running across the road. I hopped out of the car but the bear was gone. Not very eager to pose for a portrait, I guess… I was adamant on finding the animals that call the park home. We walked about 2 km into the woods and came on to a asphalted road. We decided to follow the road to see where it leads. The road did not leave us guessing for long. A short walk on this oddity in the middle of the park led us to some kind of station. No people were visible but signs of occupancy were there. It was the Algonquin radio frequency station. Since it was devoid of people, this resembled the movie set of “the walking dead”. We marched past the station and about a mile further, I found a huge satellite dish. There was an empty trailer, a danger sign and a sign that read “seismographic” something on the dish. We wandered around and I caught myself thinking that it is a perfect location to conduct discreet activities. However, this blog is not about my theories and beliefs but about our adventures. We made a turnabout and made our way back. There was a rock with an orange colored marking on it that we passed by upon leaving the woods. This landmark should lead us back to the trail where we started. A small issue arose. There was no trail and we were just wandering aimlessly in the woods. I thought I saw a trail and followed it only to come to a huge clearing which was a bog instead. Hmm, no trail here… We had a GPS with us that was useless because the batteries drained but upon turning it on, enough energy was present to show how far off we wandered. We changed our course and quickly got back to familiar ground.

Unfortunately our time in Bissett Creek road cabin came to an end upon returning from the hike. Leaving was hard. Of course there was the 6 hour drive back that no one was eager to undertake but also the thought that the winter was coming and we would have to wait until spring to come back to this park of beauty and mystery. So long Algonquin! Till next time you greet us with open arms. 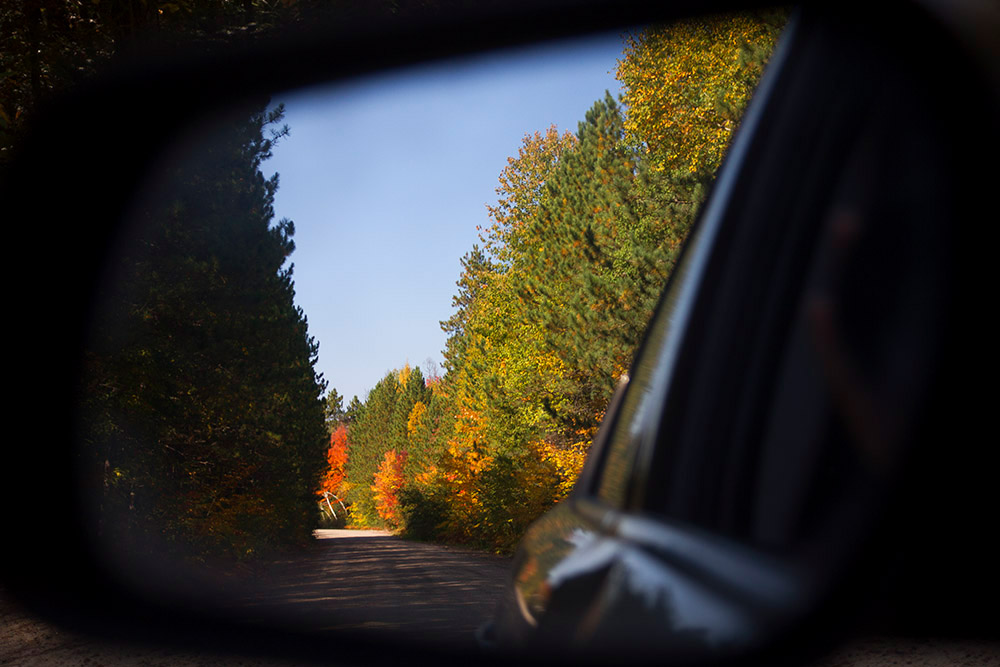