posted on January 14th 2018 in Portugal with 1 Comments 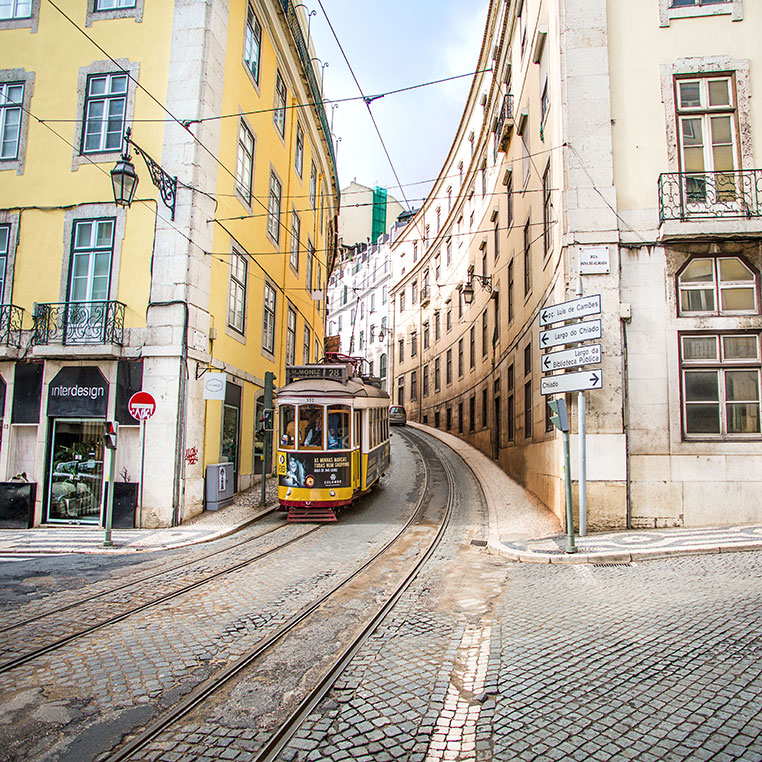 Many People asked us “Why Lisbon?”.
We heard that it is boring, bland destination that is best left to be visited when you are retired and want a visit checkmark.
We also heard that Lisbon is not a “trendy” enough and we should focus our research on more recognized and fashionable European cities.

However, Portuguese we knew all traveled back to the homeland at every chance they got. It felt as if they were hiding the awesomeness of their country.
We got curious to see why Lisbon is so underrated.

We went, we loved it and let us try to change your mind! 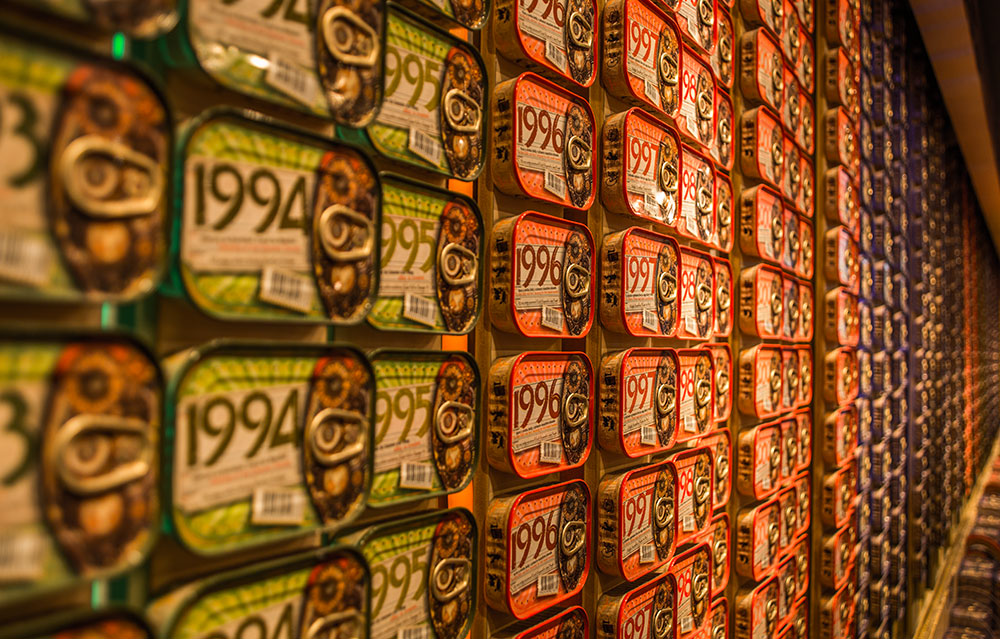 Buying a house shrunk our budget and Portugal turned to be the ideal destination on a budget. Its affordability and variety is unparalleled. As with every trip, you want to bring back a souvenir to remind you of your time. Portugal has a different opinion in regards to souvenirs.

What are the best souvenirs to bring home? Good luck trying to find lame keychains, wooden statues, and plastic nonsense. Lisbon is having none of that. The best souvenirs are cans of fish. Sardines to be precise. They have become a pop culture icon with a competition to select the best artistic rendering of a sardine each year. They are also sold in very retro packaging to give you that nostalgic feel. The souvenir carousel doesn’t stop on sardines as other peculiar but popular souvenirs include soap, toothpaste, cork and of course port wine. 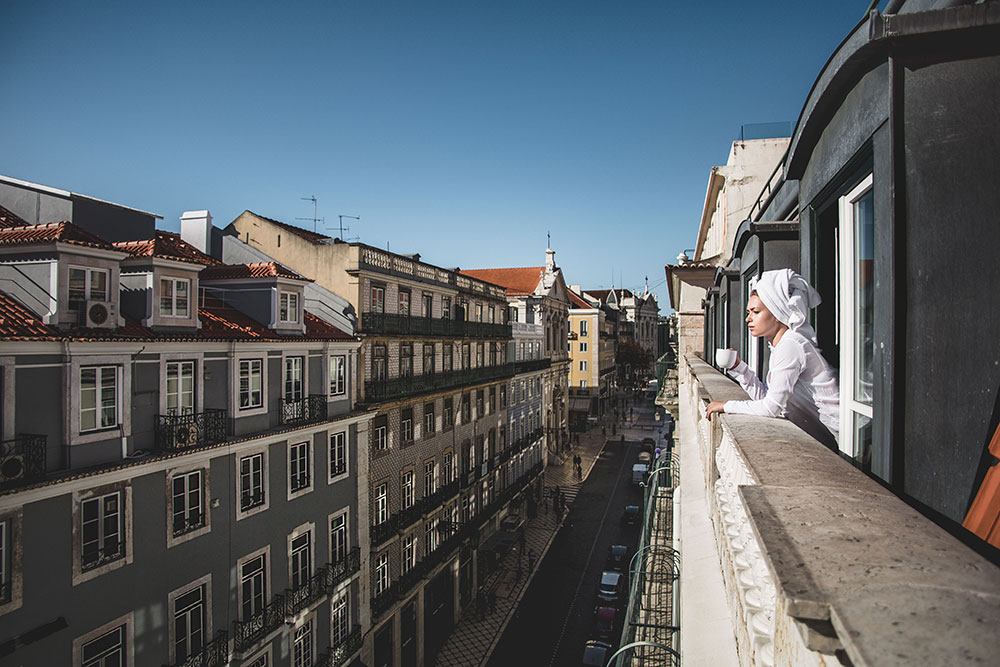 It is good and it is cheap. Portuguese drink coffee at all times of the day and now we know why. They don’t drink that toilet water that is called coffee in North America, they drink espresso coffee. It costs less than a euro and the drinking procedure is slightly different than the one we are used to. First, you take the shot of coffee, then you have a chocolate, then a glass of water. The whole process takes less than a minute. In minutes you are energized and your hands are free from carrying that ridiculous paper cup everywhere with you. 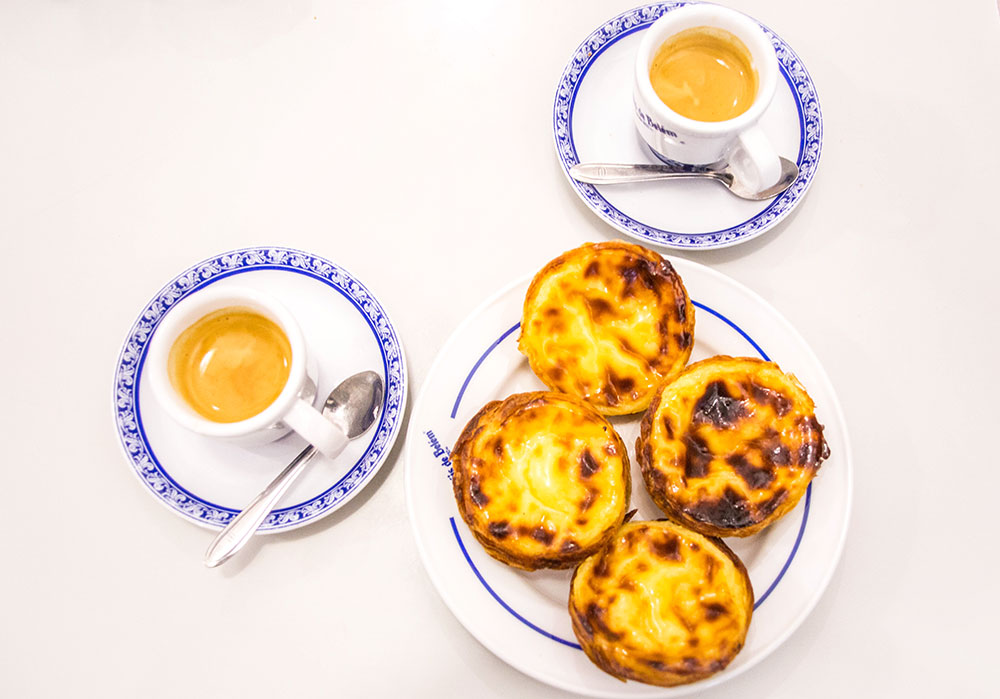 From Michelin star restaurants to tiny local eats, the selection is astounding. Their burgers put Texas to shame, the seafood variety is limitless and don’t even get us started on deserts. Portugal is home of Pasteis de Nata, the most delicious egg tart pastry. If you are watching your figure, do not try any!

In 1820, the monasteries were ordered shut following a revolution, the monks started to sell these pastries to survive. The business started booming and 200 years later it is still thriving. Every day, about 20,000 pastries are made and sold in the most famous bakery in Portugal: Fábrica de Pastéis de Belém. On busy days, that number doubles. The recipe is a secret and the confectioners sign a letter of confidentiality swearing to secrecy. They are different from the other egg tart pastries and totally worth the visit. We walked 8km one way just to have some! Pastéis de Belém was ranked as the 15th most tasty delicacy in the world! 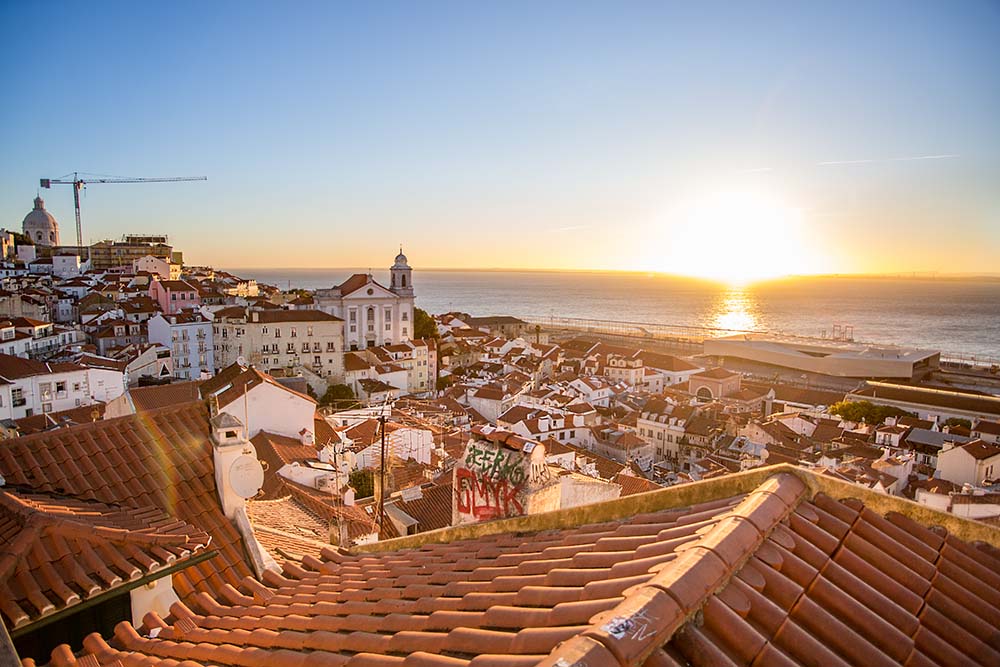 Lisbon is the westernmost point of continental Europe and also has the warmest winters of all metropolises in all of Europe. Why is this fact important? That is because there are lookouts, vistas, and balconies everywhere facing the sun. If you want to get some serious images of sunrises and sunsets sprinkles with antique buildings and castles, Lisbon is the place to go. We got up every morning to walk the streets and while it was bitterly cold, it was totally worth the sacrifice. 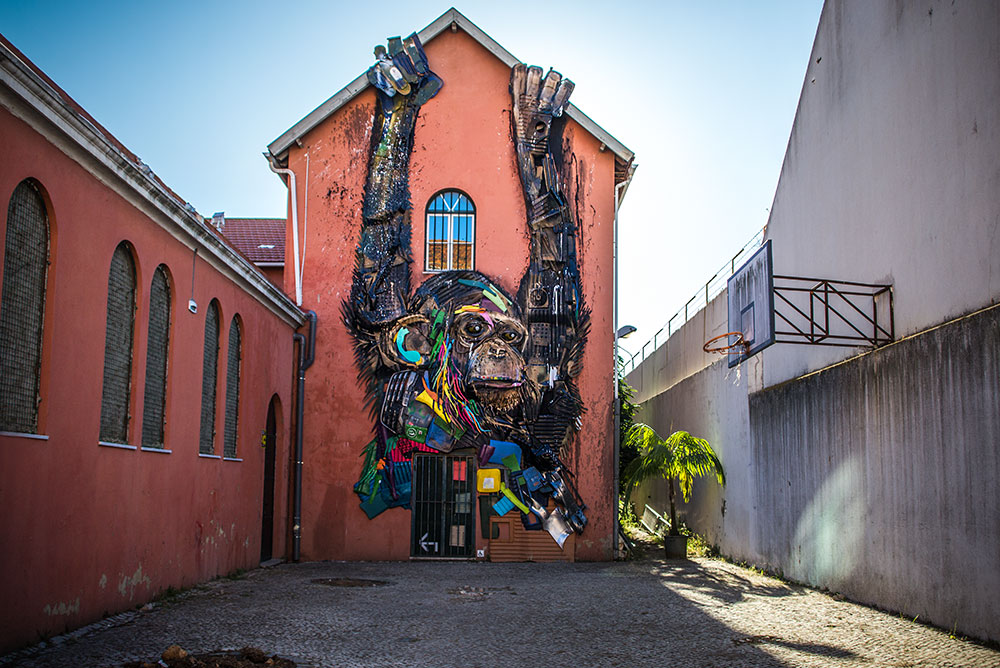 While some cities frown upon graffiti and try to eradicate it from its streets going as far as making it a crime, Lisbon embraces it. Walls, building facades, and even lamposts are decorated with street art. Colorful art breathes fresh air into peeling, decaying streets and Portuguese love it. World famous artists flock to Lisbon to make it their canvas. 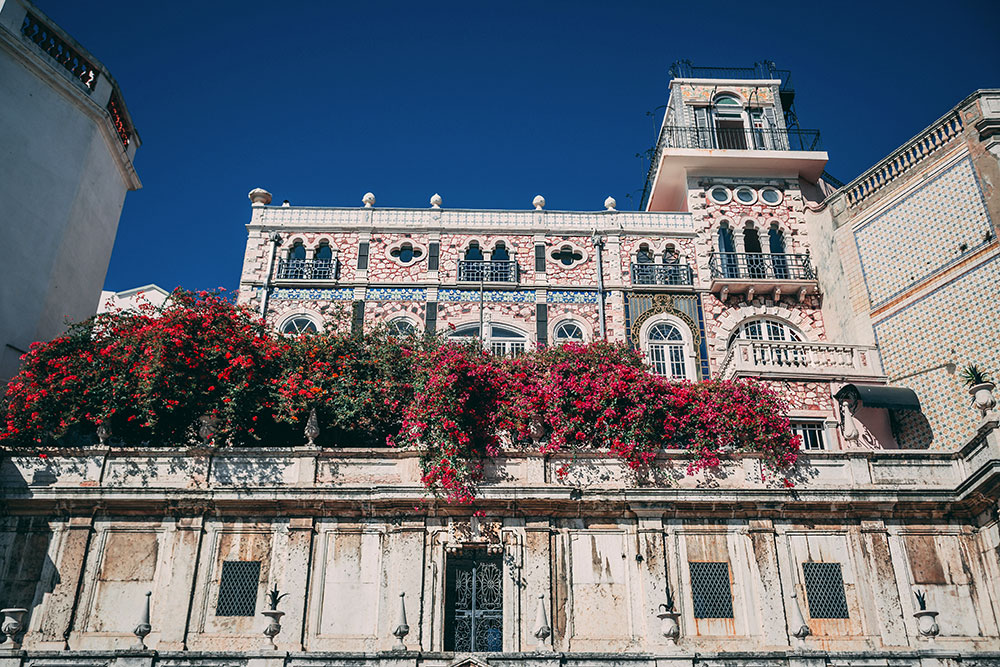 Majority of the city has been destroyed in the great earthquake of 1755. The style that followed was dominated by simplicity. However, Alfama district has not been touched by the earthquake. Standing from the time of the Moors, Alfama has not changed. Narrow, winding streets that snake into the unknown. In Belem, you can see the grandeur that followed with the gold and diamonds that were brought from Brazil upon colonization. From castles, churches, and museums to lookouts and ancient convents, Lisbon has a lot to keep you looking up. 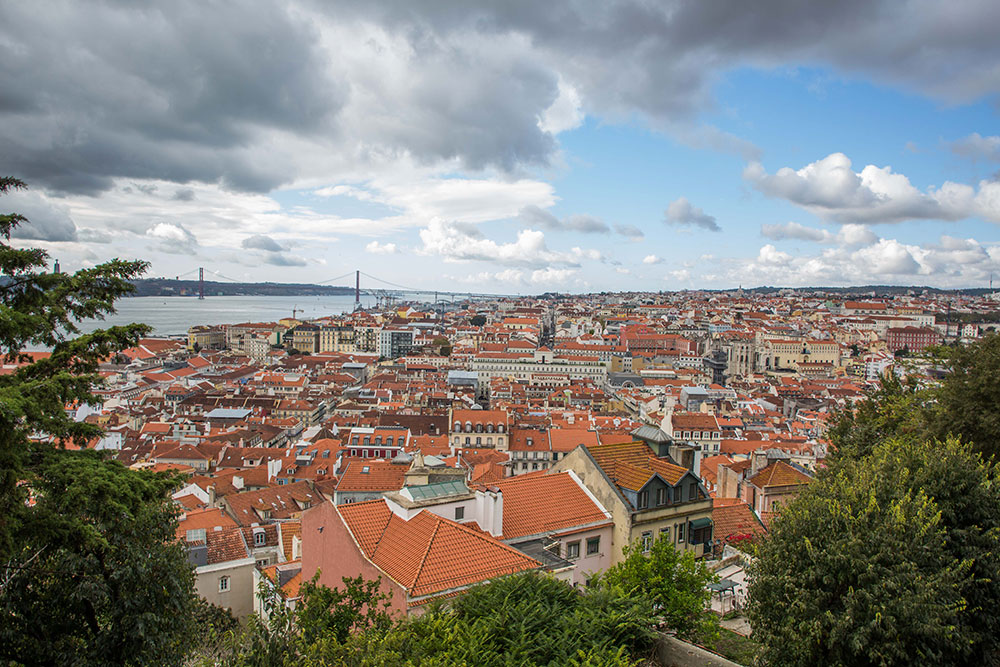 Lisbon is built on seven hills and it seems that there are lookouts all over that allow you to see the city from above. Some of the best places are in Sao Jorge Castle. If you don’t want to be stuck in a tourist trap, there are numerous lookouts in Alfama as well. Check out Miradouro de Santa Luzia, near the church of the same name and over remnants of the Moorish city walls. Don’t forget the restaurant terraces that are also conveniently located to allow you to sip wine while watching the sunset. 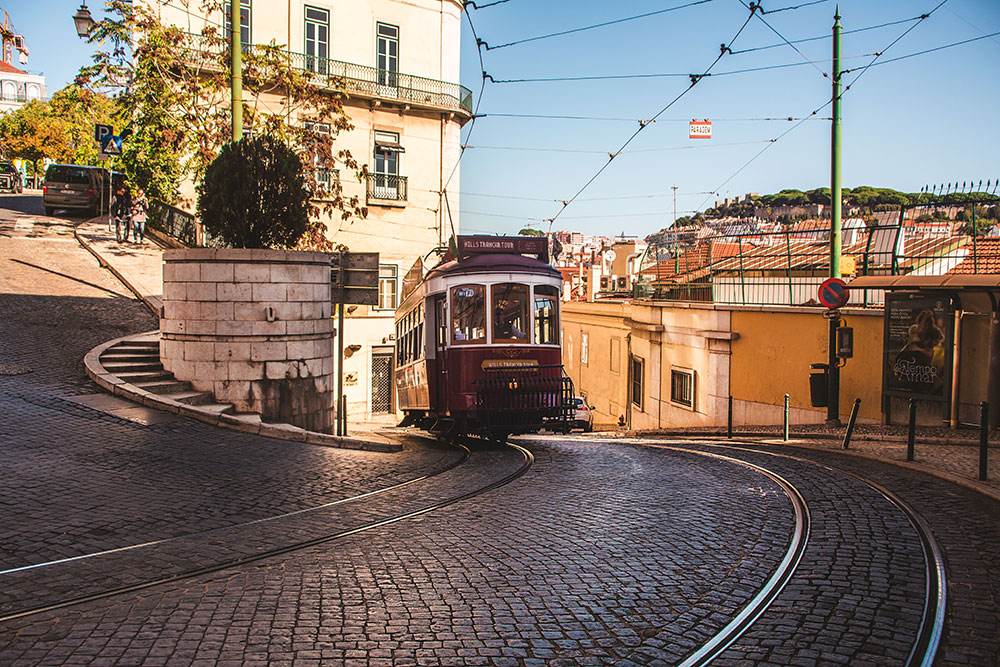 Walking the cobblestone streets in the morning is a great way to get to know the city and to appreciate its beauty. It is totally safe, clean and easy to navigate. Although if you like walking like us, most likely you will need a new pair of shoes from all that walking on cobblestone. We felt safer in Lisbon at night in some back alley than in Barcelona during the day.

OUR FAVORITE PLACES IN LISBON? 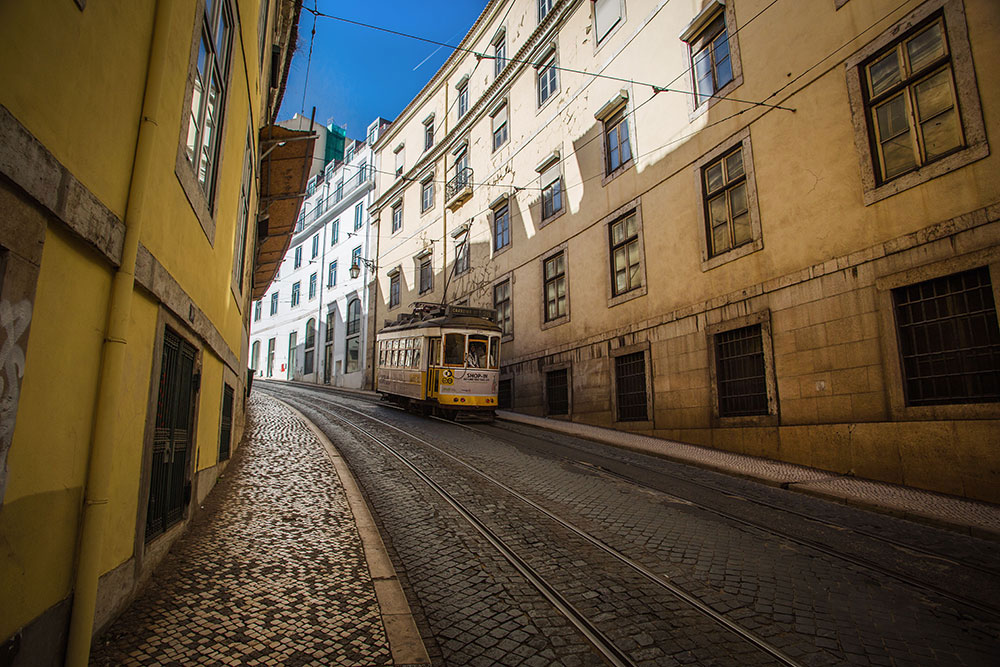 The most famous tram can be found in Lisbon and it costs only €2.90. You can buy the tickets from the driver or at the metro stations. There are tons of pickpockets working during rush hours, so keep that in mind. If you want a really that amazing photo of the tram on a crowd less street, you have to forgo the beauty sleep and get up at 5-6am. 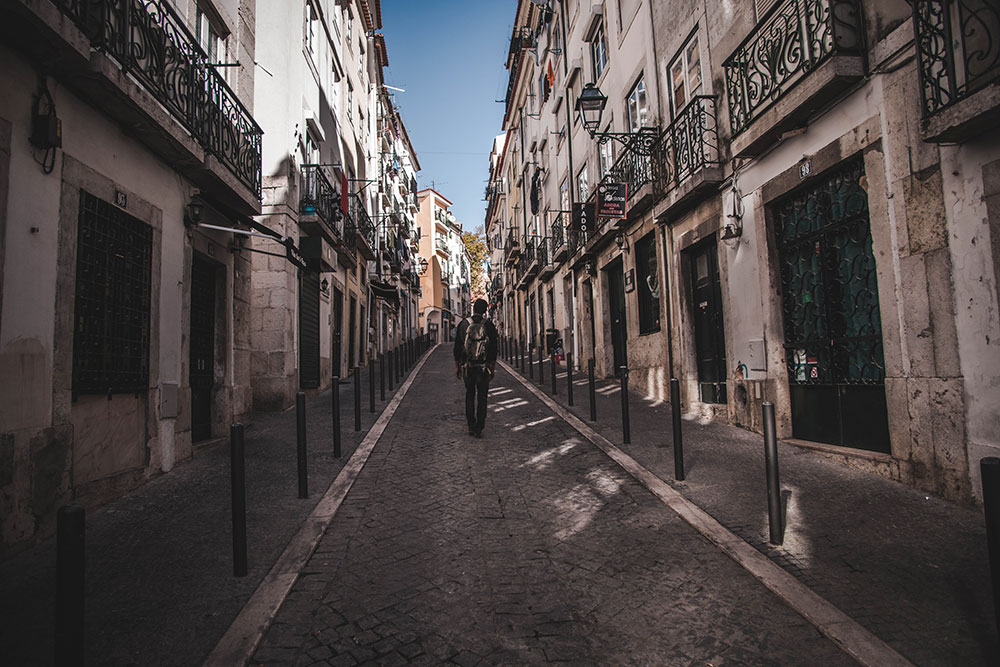 Alfama was the center of the Moors. In fact, during their reign, the whole city was located in Alfama. It was a very poor (still is) area that was dominated by fishermen. Now, the buildings are getting a facelift and fado is heard from all corners when the sun goes down. Do not bring a map or use GPS in Alfama. Let the labyrinth of winding streets take you and let you be your own tour guide. Picture taking will be in full effect. 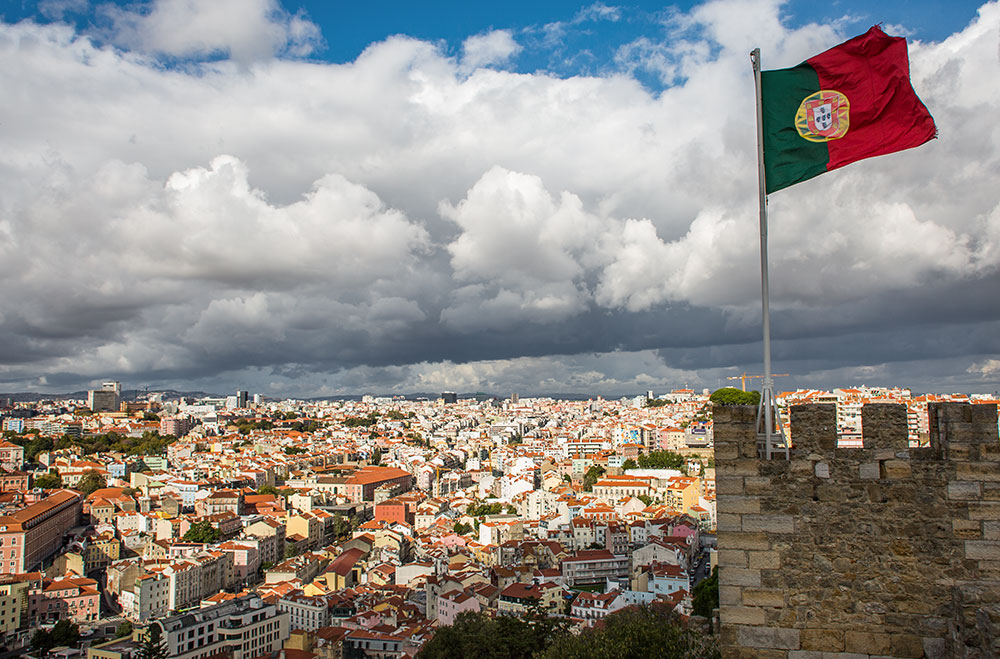 The castle is hands down the best way to see the panorama of the whole city. First fortifications were done by the Romans and due to its favorable location, served as a fort for Greeks, Phoenicians, Moors, Berbers, Portuguese, Spanish and whoever else conquered the kingdom. To explore the castle and grounds, you will need a whole day. If you are into medieval history and have a spare day in Lisbon, just come here. There are 77 towers to visit, the perimeter of the castle is 5400 meters. That is a lot of walking as we learned. According to a legend, a knight noticed a door of the castle open and threw his body into the breach thus allowing the Christians to retake the castle from Moors. 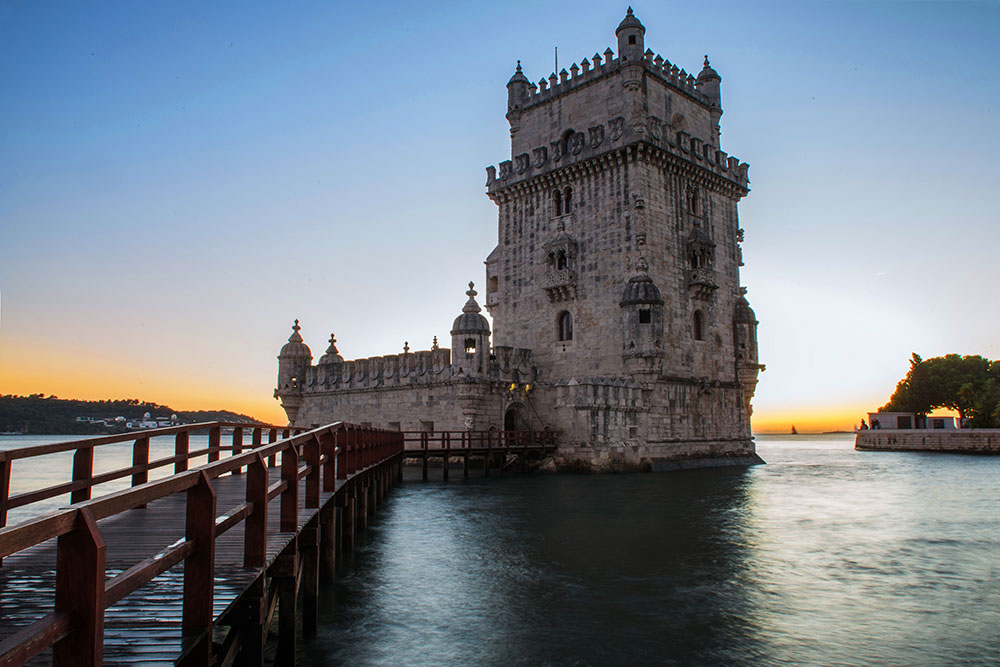 One of Portugal’s seven wonders, Belem tower is located 8km from the city center and we walked the whole way just to see it. The tower was used to greet the great Portuguese maritime explorers upon return to Lisbon and also used as a jail. The lineups to get inside can get massive during the day and the best way to appreciate it’s beauty is to see it during sunset. No people and stunning views. 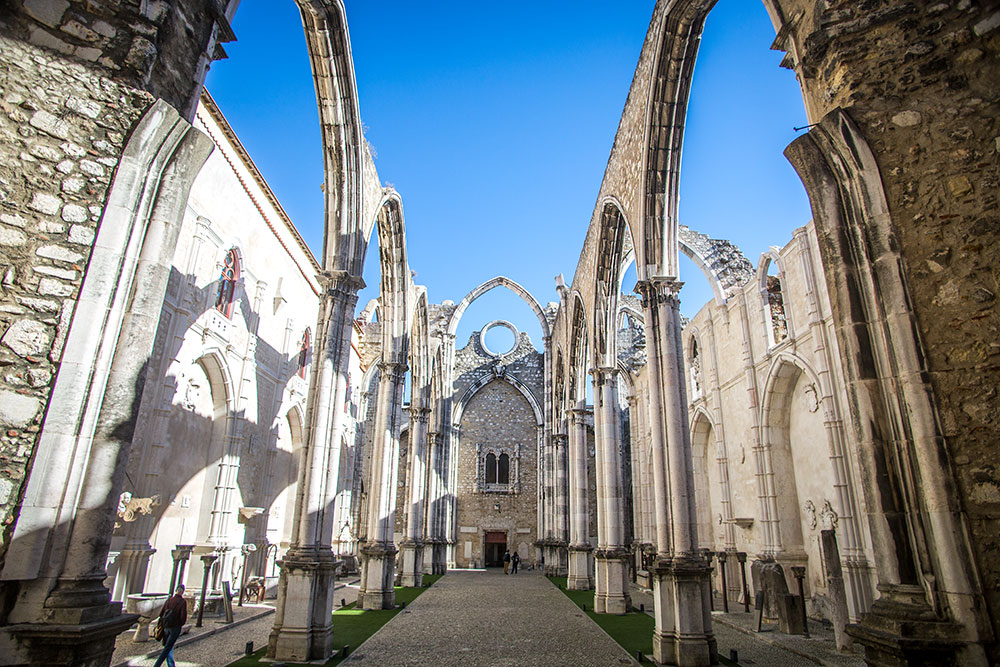 A mere step from the busy hustle of the city center, Carmo Convent is one place that is a must to visit. It used to be a convent that was destroyed in the great earthquake in 1755. What you see in the picture, is what remained. The grounds were used as a military barracks, coup stage grounds, and now a museum. Notable exhibits include tombs of kings and mummies from Peru. We highly recommend visiting.

The best part, this is just a tip of the iceberg…