posted on August 6th 2015 in St.Martin with 3 Comments 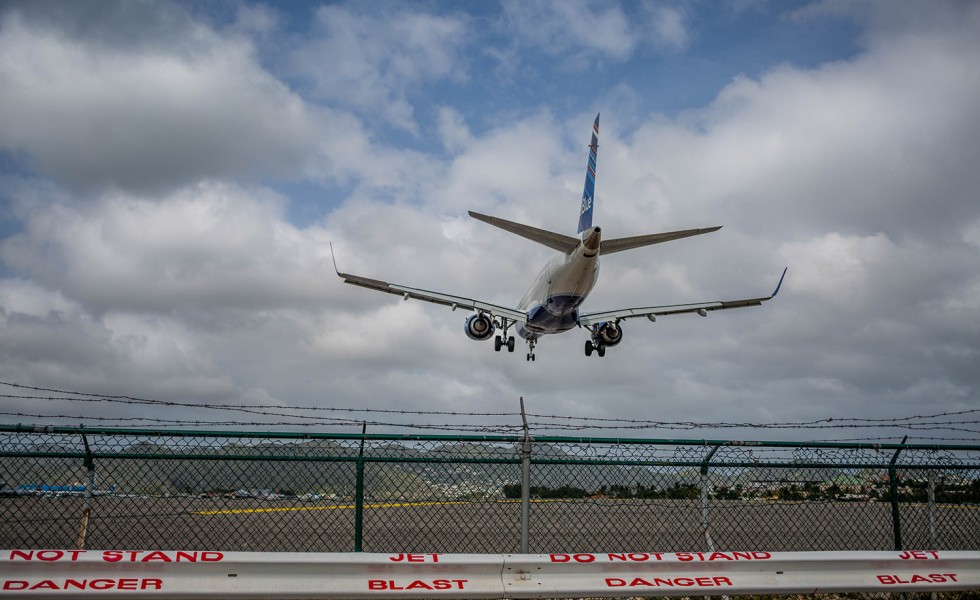 No visit is complete to St.Martin without a trip to Maho beach.

Maho beach is located right beside the Princess Juliana international airport. The airport that has the dubious distinction of being one of the most dangerous airports in the world. I am sure you have seen the photos of people on the beach with huge jets zooming past their head. We needed to see this phenomenon for ourselves and experience “riding the fence”.

To clarify, Maho Beach is actually not much of a beach. It is a narrow strip of sand that steeply descends towards the lapping waves. A two way road separates the beach from the airport fence. I was expecting a huge beach packed with sun seeking tourists, waiting for enormous jets to whiz by, kicking up sand. Except when we got there, we were the only ones on the beach.  However, I am jumping ahead of events. 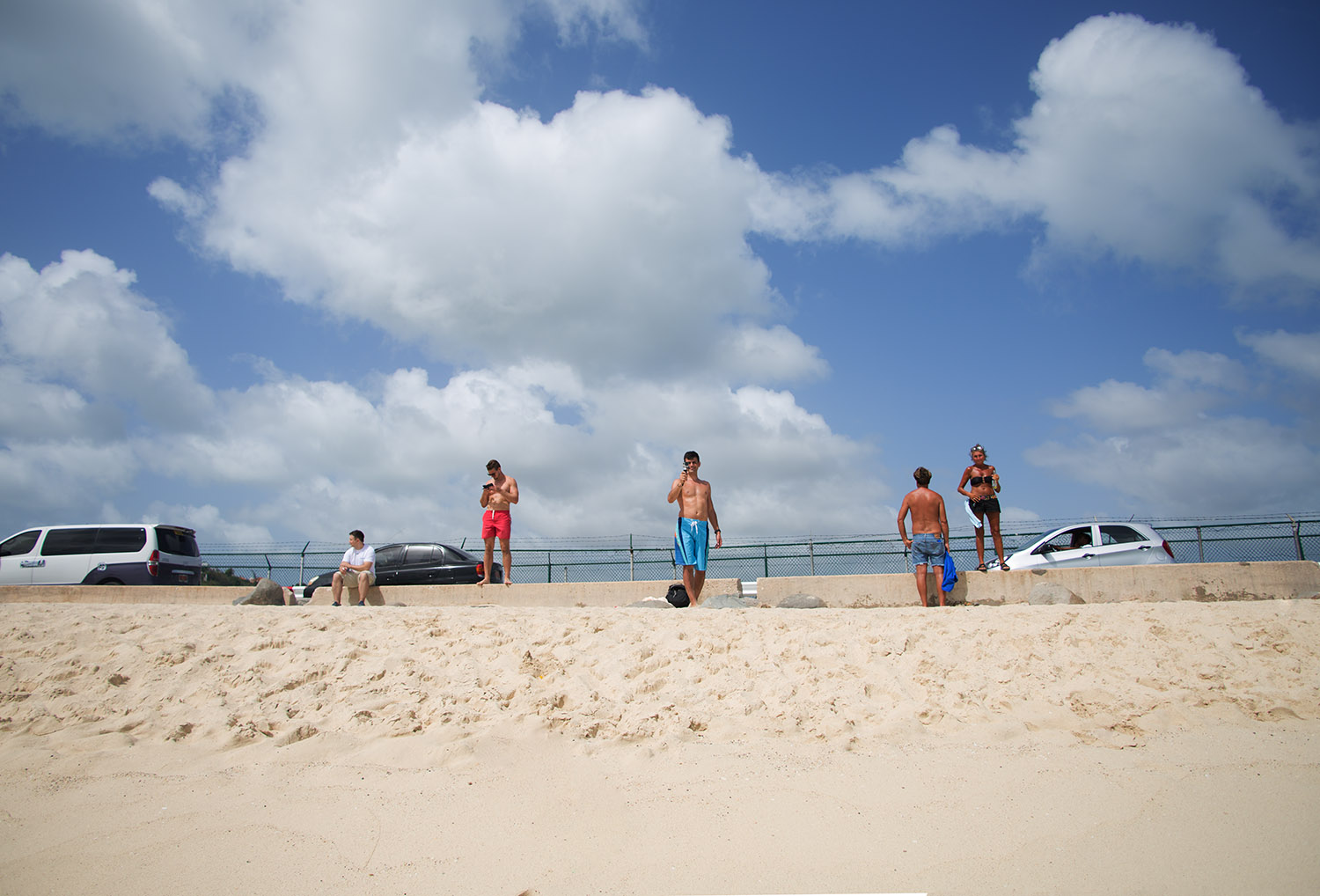 We had agreed to meet our friends Kirill and Anastasia there. They arrived a few days after us and were staying at Maho. The cab ride was supposed to take 30 minutes to get us to the beach from Grand Case, but that was not the case… The ride took more than 1.5 hours and with the airport nowhere in sight, we were getting frustrated with the never ending traffic. All of the sudden, the cab driver receives a phone call and says that if we want to get to the beach, we would have to go on foot.

“The road is closed and I don’t want to drive there. You have to pay me the fare and walk”. The driver responded.

“How long do we have to walk? Till eternity?” I said sarcastically.

“Nah, not long, just keep going straight, you will see the beach there” Lazily, he responded.

No choice but to get out. We made the rest of the way on foot, avoiding bumper to bumper traffic. The drivers were honking at each other but the roads remained at standstill. At a busy intersection we came across a police patrol that was redirecting all traffic to go back. No cars were allowed within the vicinity of the airport. “That’s strange” we thought.

Elena noticed a sign ahead that pointed to Maho beach and we picked up pace in anticipation of meeting our friends there.

We get there and the beach is completely deserted. Where are the massive crowds that fight for space on the sand to watch the planes? The road that separates the airport and the beach was empty and the only sound apart from the waves came from a bar at the end of the beach. Our friends were nowhere in sight as well. We decided to head to the bar and hopefully find out what happened. Just as we got a beer and sat down, police cars zoomed past and then we noticed that everyone is fixated on the huge 747 KLM plane that was parked at the end of the terminal. We spotted a man in a suit using a two way radio. If he didn’t know what was going on, no one would.

Turns out, there is a bomb threat against KLM airline. Apparently, this is the third one in a span of a few months. Airport receives a phone call, the caller alleges a bomb aboard the plane. The plane gets grounded, the airport gets put on lock down. After a fruitless search, the plane receives the OK to depart. Meanwhile, all the other planes are forced to circle around as they are unable to land.

Our first time on Maho Beach was turning into a drama filled event. An hour went by and we saw movement on the tarmac and I guess word spread that it was safe to go back. Immediately all of the bar patrons filled out. It was hilarious. Everyone was scrambling to get to the departures gate. Only in St. Martin you can wait for your plane sitting at an oceanfront bar, sipping margaritas. 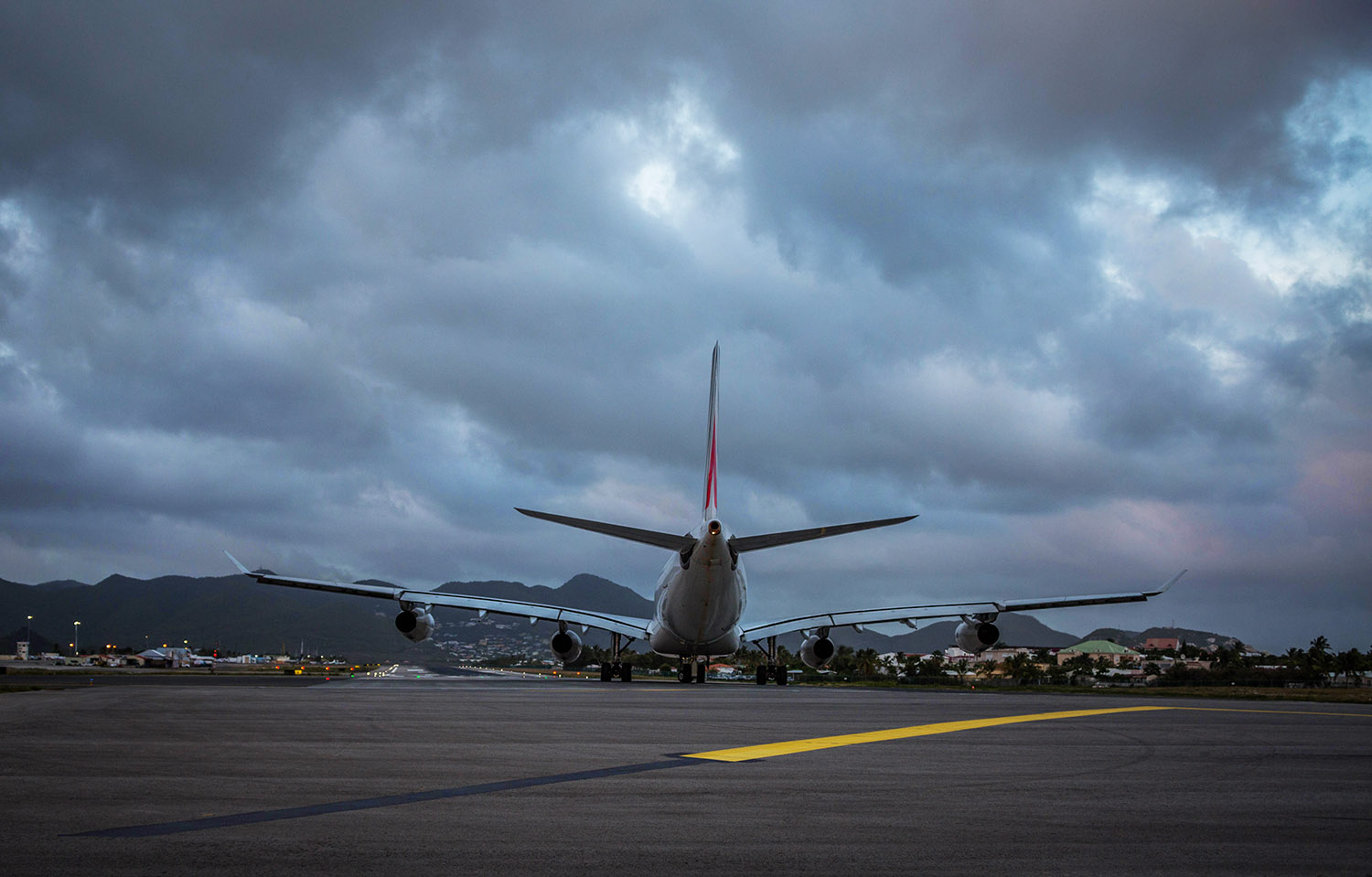 It is an amazing feeling as you feel the wind on your face from the roaring engines of these huge metal birds. The planes started to come in one after another. The bomb threat actually made the whole experience more jam packed as the sky was filled with circling planes.

While watching the planes land was exhilarating, it was “riding the fence” phenomenon that we came for. Riding the fence is known among the locals as the more hardcore way of experiencing the airport. Basically you stand on the side of the road and when the plane takes off, you hold on for your dear life as sand,debris,jet fuel,and unattended personal items fly by you. The heat and wind generated from the turbines is intense and it can prove dangerous as people have been killed there. 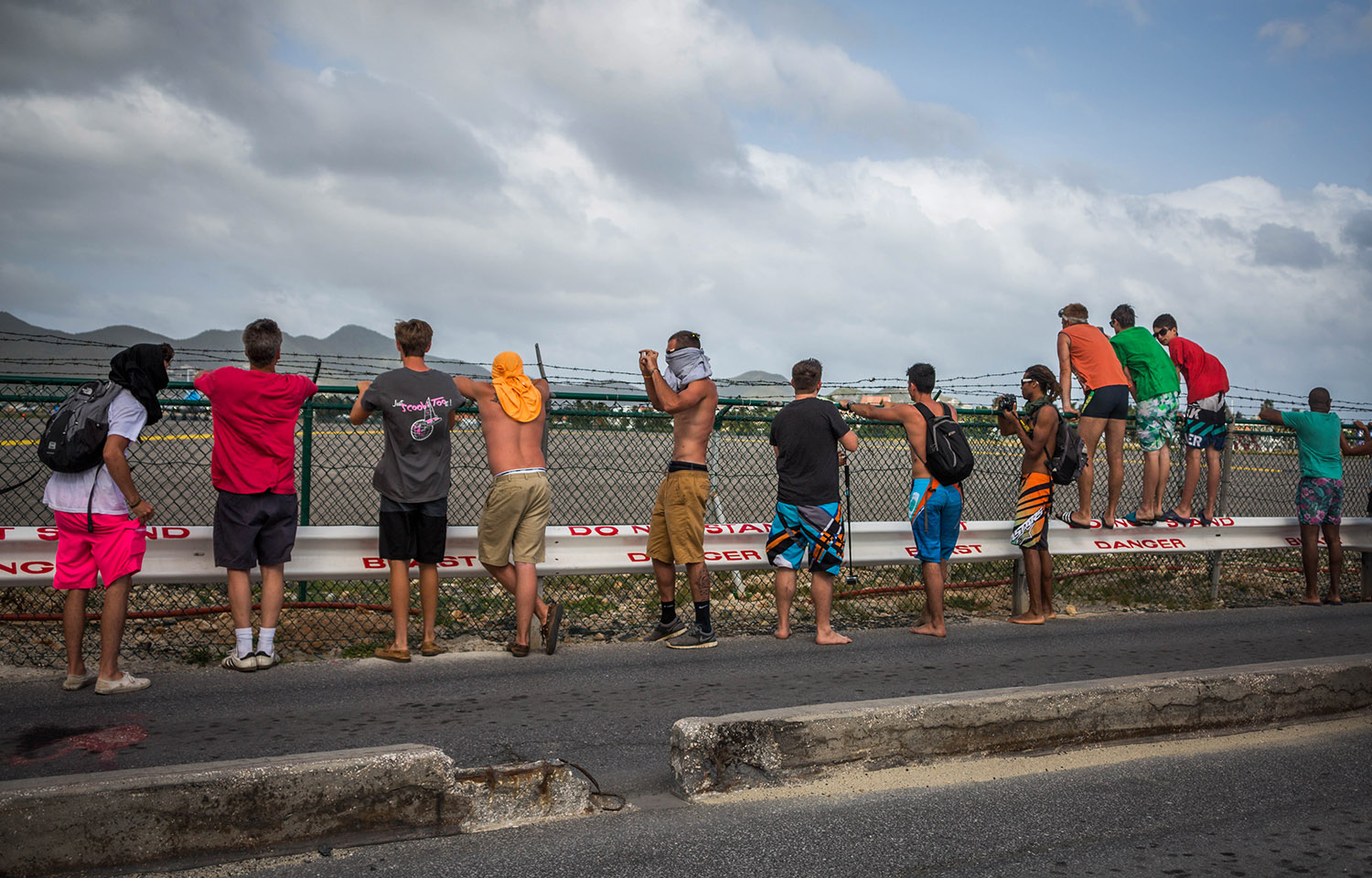 The first plane that took off was the KLM flight and before the flight, the plane was hosed down. It is usually done as good luck or when it is the pilot’s last flight. The four of us were front and center and we exchanged looks of anticipation. The heat blast was completely unexpected as the plane started to roll, I looked at Elena and she was hanging on by the tips of her fingers. Ladies, if you have small hands, keep that in mind as the diameter of the pipe is large and if you can’t fully wrap your fingers around it, then it might be problematic. 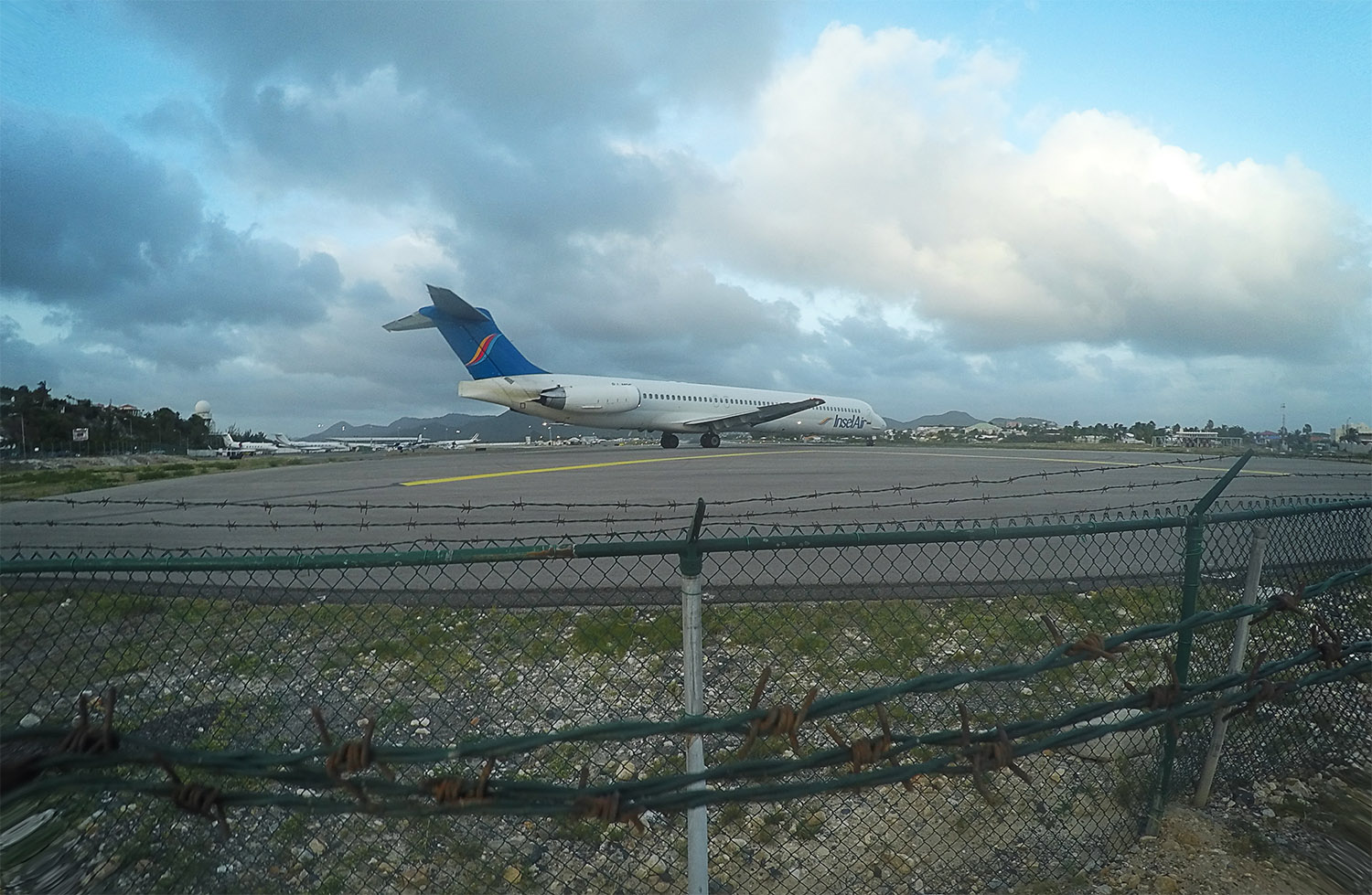 The KLM take off and the smaller American Airlines take off was exciting but pales in comparison with the show the pilots from Insel Air put on. A local man had told us that these guys are the creme of the crop and it is best to be prepared. Game on! The crowd that was riding the fence for other take offs had disappeared. When we looked around there were only 4 people left and the beach became deserted. 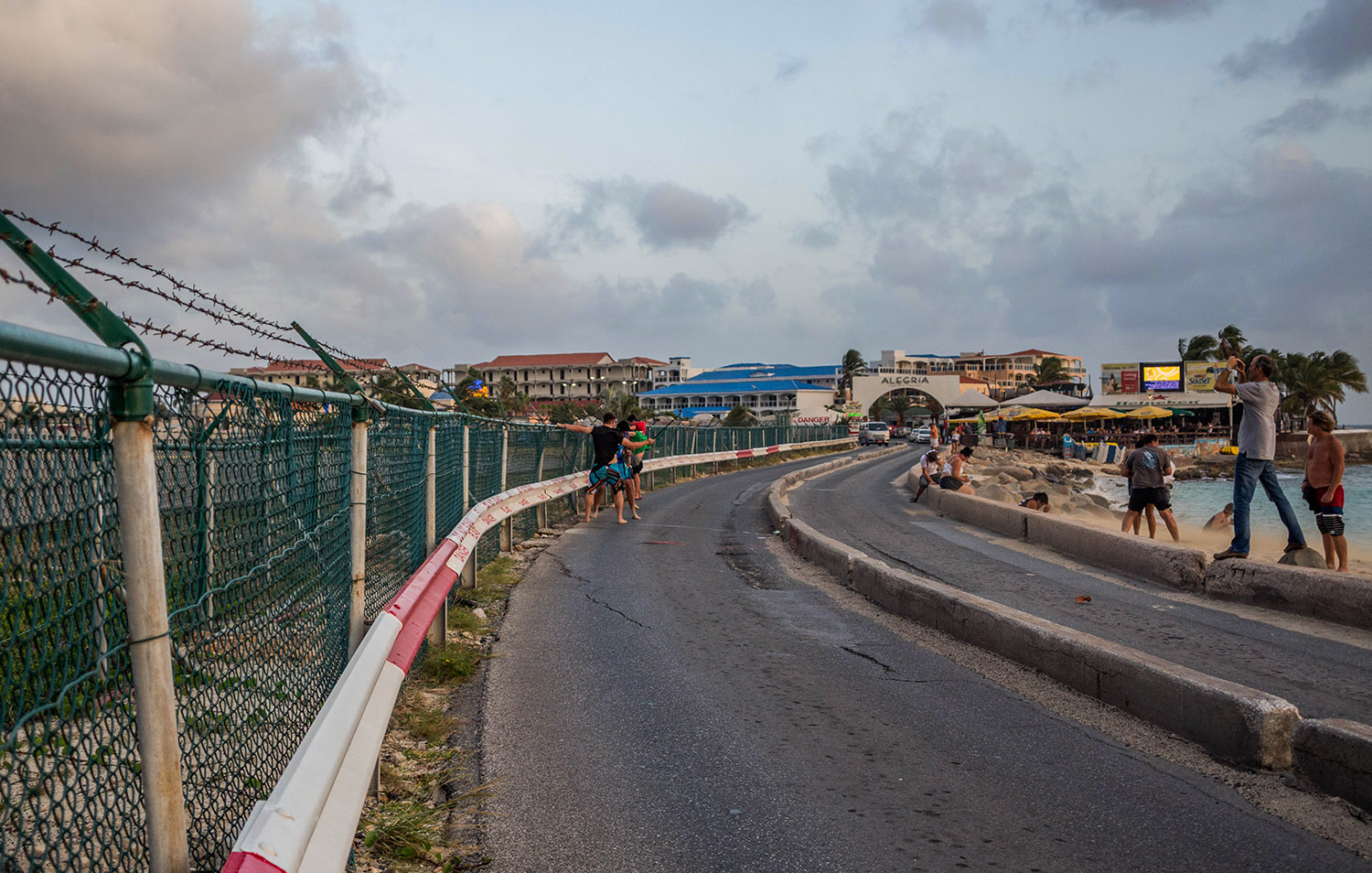 “This is interesting” I thought. Elena and Anastasia smartly moved about 50 meters away. Kirill and I looked at each other and got ready for the show. Now, it is hard to put in words, how awesome that experience was! The heat from the turbines, the wind that almost picks you up from the ground. It seemed as if the pilots were on a mission to see everyone and everything swept into the ocean. The intensity of the heat was increasing and for a split moment, I thought this damn plane better take off soon or otherwise… Finally the wind had died down and the wave of heat diminished, I looked at Kirill and saw the biggest smile ever. This was definitely worth the trip to St. Martin! Elena was standing more than 50 meters away and the power of that plane blew the camera out of her hands. She had the camera hanging on her neck and it came down very hard and slammed into her side causing a bruise the size of a fist.

A few tips for the daredevils that plan on riding the fence. 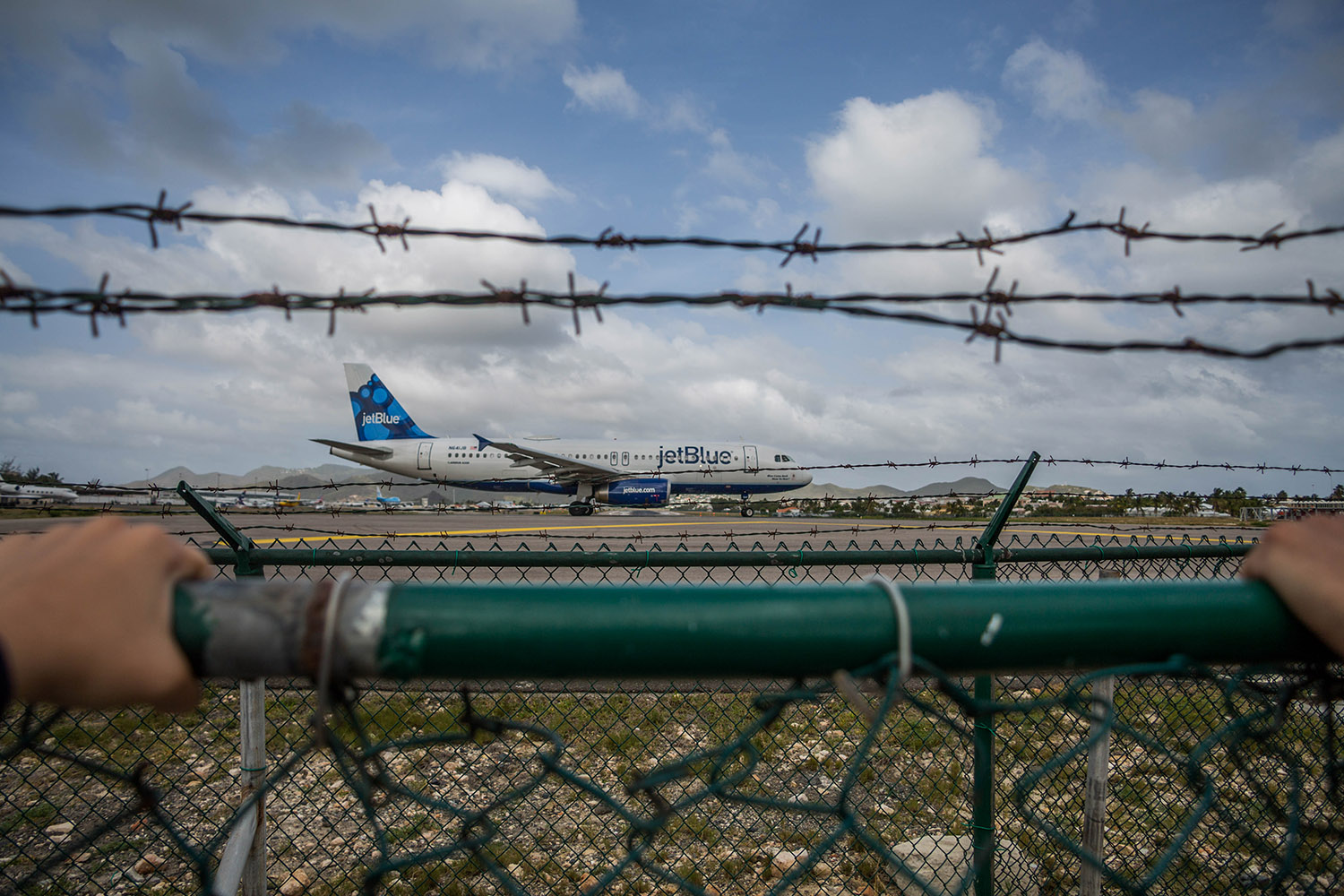 1. Do not try to hide behind the cement barrier that separates the beach from the road. The thrust of the planes’ turbines kick up a small tornado and your skin will be pierced in million places with pebbles.

2. If you decide to ride the fence, do not let go. Whatever happens, just don’t let go thinking you can walk away. The force from the engines had flipped over cars that attempted to stop half way.

3. If you rent a car and while driving by, see a plane taking off, DO NOT GO! Wait for the plane to take off. In fact, the locals will try to stop you from going.

4. Working on your tan on the beach by the landing strip is a bad idea. Unless you want to be Alladin and fly away on a magic carpet that is your towel into the ocean.

5. Avoid standing with small kids in the take off zone.

7. If you decide to be in the water, be prepared to be pushed back by the wind a few dozen meters further into the ocean.

8. If you have sunglasses, wear them! The wind force will drive rocks, sand and garbage into your face. Imagine the disaster when you find out that your eyes are bloodshot and you can’t do a selfie.