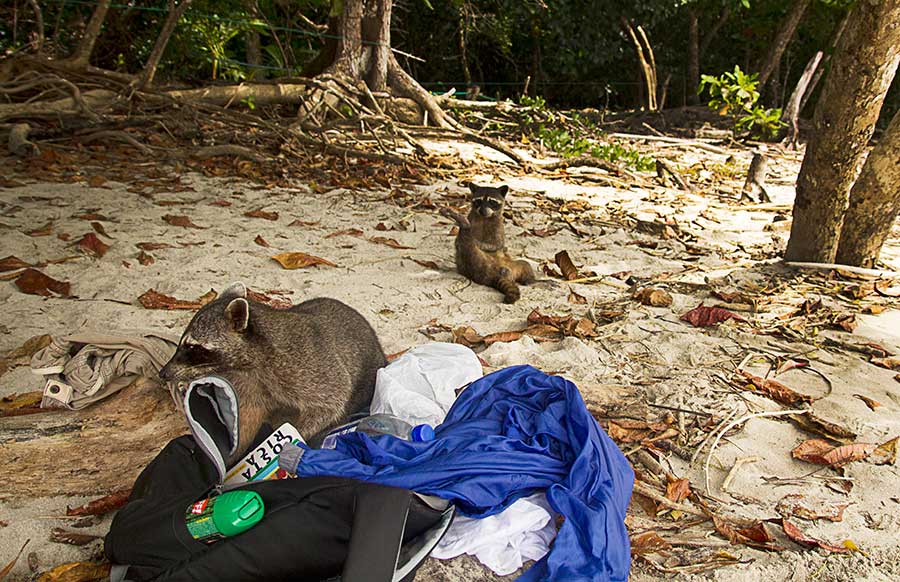 I’ve had many questions from people asking if it is possible to see a lot of stuff in one day. In a country packed with parks, animals and adventure it sure is!
While on our road trip across Costa Rica, we stopped at Jaco for a few days. We decided to see some crocs, beaches and sloths all in one jam packed day.

As photographers, nothing is more spectacular than sunrises and sunsets. The wide array of colors is mirrored in every picture. We got up right before sunrise to watch and photograph the ocean from a hilltop. The day did not start out the way we wanted as the sky was cloudy and no rays or colors were visible. No point of sitting still so we hopped into our trusty little jeep and made a trip up highway 34 towards Carara national park. There is a famous bridge there and I was very excited to see it. Below the bridge is the Tarcoles river and it is infested with crocodiles.

Dozens and dozens of huge crocs lounging by the riverbanks, occasionally sliding into the water to cool off. I parked on the side of the road and immediately a dude appeared to ask for some cash to watch the car. I don’t think it was necessary as there were two serious looking cops there but I didn’t want to hurt the guy’s feelings so I gave him a few hundred colones. Apart from the crocs below and traffic jam of people trying to get the best looking spot, there was nothing else to see. Interesting but shocking fact: more than a few dudes full of bravado tried to get close to crocs by climbing down the bridge. For some that was the last climb, hence the police presence. 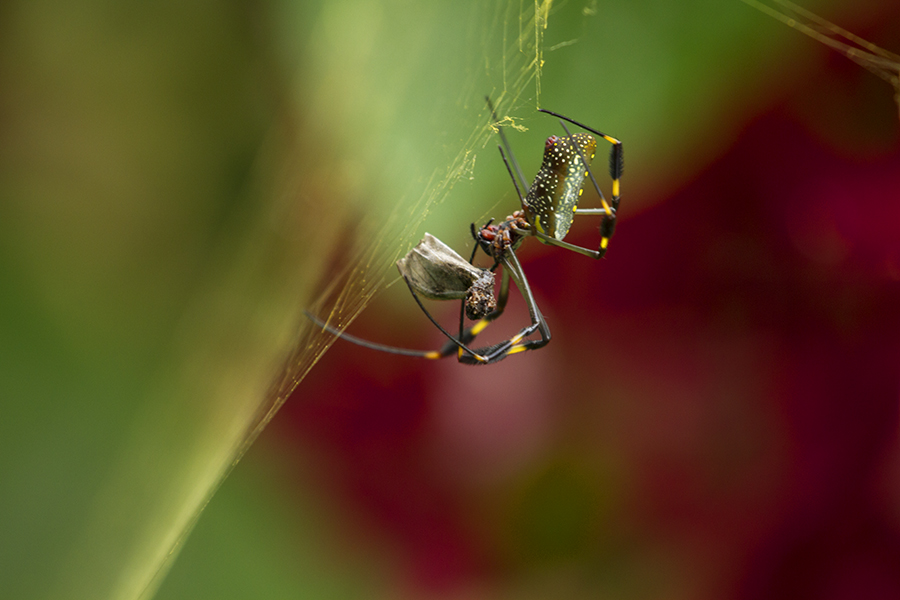 We got back into the car and made a U turn back towards Jaco. It was still morning and since cafes and restaurants were closed in Jaco, we decided to head straight towards Manuel Antonio national park.

The drive along the coast towards the park is quite nice. Surfers, snorkelers and beach goes would be happy to see so much variety. We passed Playa Hermosa, Playa Palma, Playa Esterillas Oeste and finally got to a sign directing us towards the park. I was starving and we drove up to a hotel not 5 minutes away  from the park. I don’t remember the name but it had a quaint little café that had 80’s power ballads playing and friendly staff. It was one of the best breakfasts that we had. We sat listening to Bonnie Tyler and watched little capuchin monkeys chase each other across the power lines. Parakeets were flying towards the jungle every so often. It was a majestic experience. 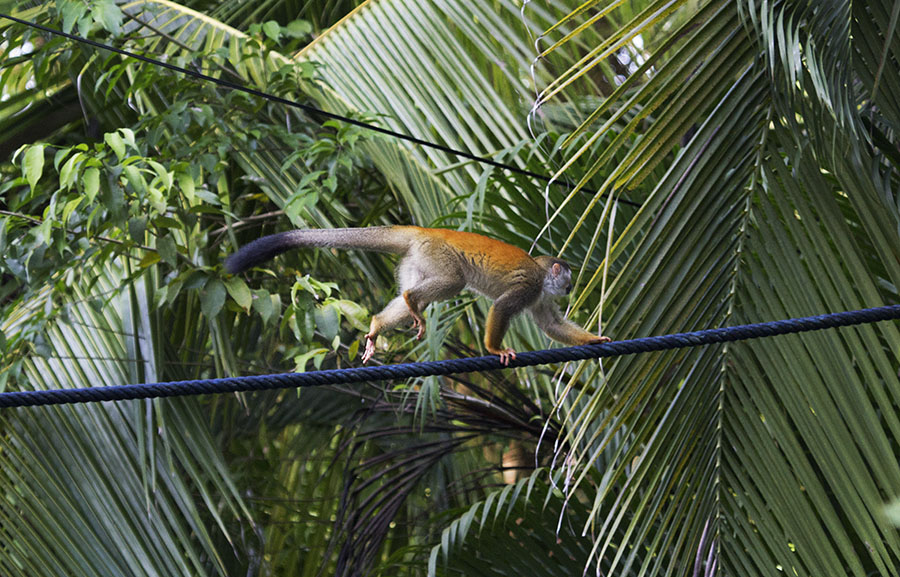 Arriving at the park, we were greeted by the first unpleasant experience… A man got in in the middle of the street and stopped us. He said we can’t go further and have to park here. I asked why and he just replied “ because I told you to”. So I said sure and as soon as he got off the road, just drove on. At the park entrance, there were plenty of parking attendants and for $10, they will watch over the car. The second unpleasant experience was the guides with huge telescopic lenses haggling for their service. I understand that it is their livelihood and the competition is stiff but “no thank you” should mean that. We paid our entrance fee and started along the clear marked path in the park. We really wanted to see a sloth and tried so much that my neck was killing me at the end but no luck. However, we saw plenty of howlers, capuchins, aguties, deer and overly friendly raccoons. We also saw caterpillars. You might ask “What the big deal with caterpillars?” Well, Elena is terrified of them. That must be her only phobia. It is ironic how she would descend into a cave to see some snakes but at a sight of caterpillar runs away screaming. I was determined to help her overcome her phobia and came up with a plan. We would do macro shots of caterpillars and through photography defeat Elena’s phobia…. 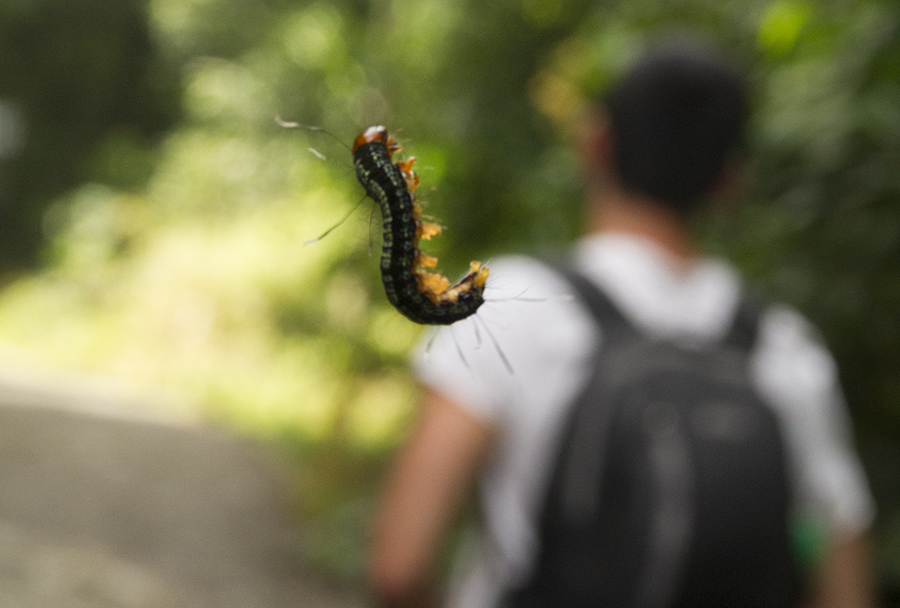 It stated out well and Elena was beaming with confidence that she did it! Until we came to a set of stairs in the jungle covered in caterpillars and she ran away screaming again. Any suggestions that would help Elena overcome her fear of caterpillars are welcome!

The third unpleasant experience was a few dozen people huddled beside a monkey, snapping away with their cameras. The poor monkey was clearly agitated at all the flashes firing and people laughing and pointing at him. It was very discouraging and saddening to see. I understand that everyone wants to see wildlife and bring back colorful pictures but this was too much. 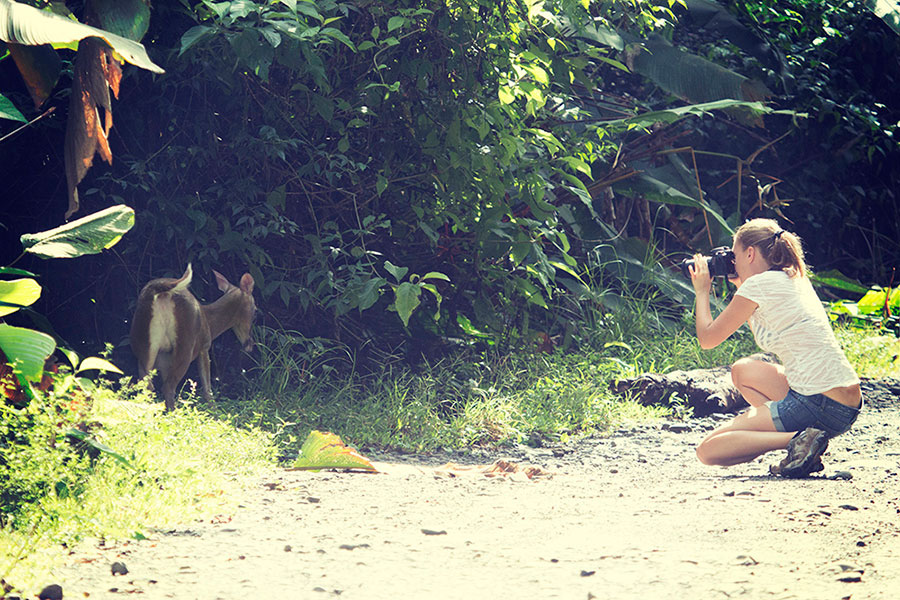 Ironically, hordes of people trampling through the jungle failed to see a deer right in front of them. Elena was walking and taking pictures of this doe for a few minutes. She would talk to the doe and avoided making her skittish. All of the sudden someone yelled “DEEEEEEER” and people started running towards the poor animal. Sure enough, with a few easy strides she was back in thick foliage. 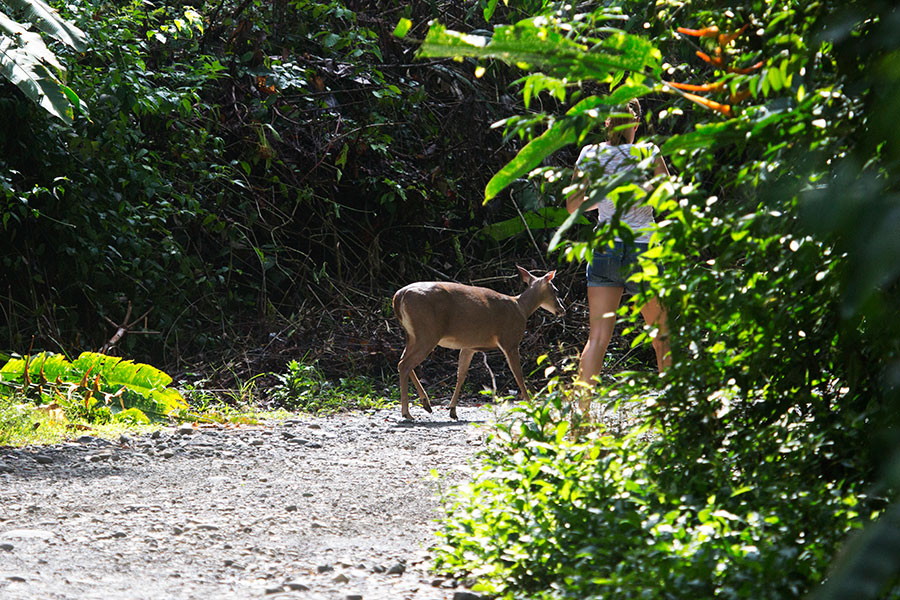 We made our way to the beach and the beach turned out to be amazing. Clear blue water, white sand and picturesque hills teeming with life. We were interrupted from our idyllic bliss by some very brave residents of the park….The raccoons. Now the north American cousins have nothing on these guys. They are brave and lose no time. A pair came right to us and started to rummage through my backpack. 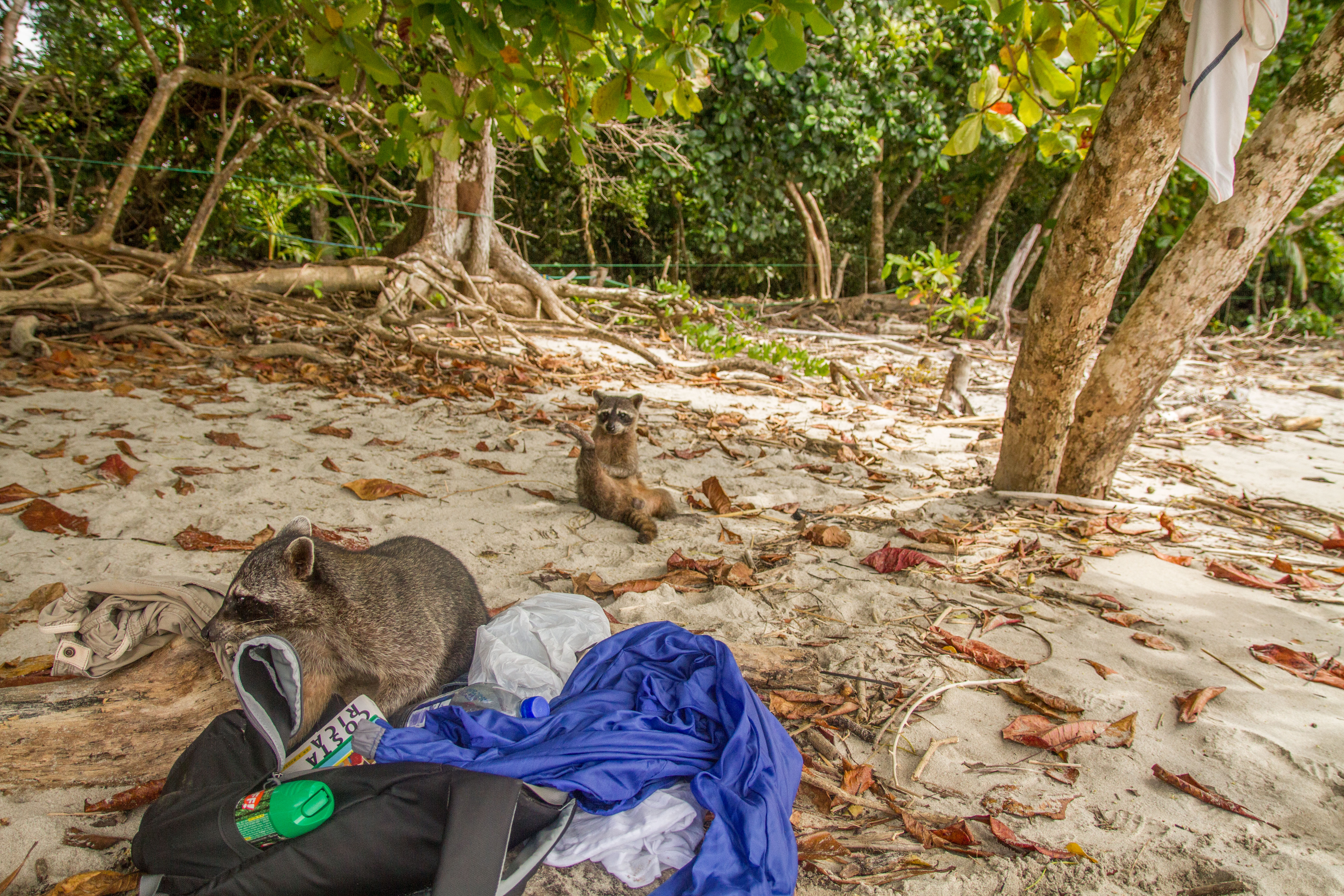 Shooing and waving your hands only made them look at me like I was disturbed. So I hung the backpack on a branch. They chirped for a while contemplating their next move. Then they called for reinforcements, climbed onto the tree and with their weight brought the backpack back down. I had to slap one on the butt to finally get out from the backpack and leave my lens cover alone. They sat around looking displeased and finally moved on to harass other beach goers. They actually managed to steal a camera from one couple and run off into the bush. The poor guy ran after them yelling to drop the camera bag. 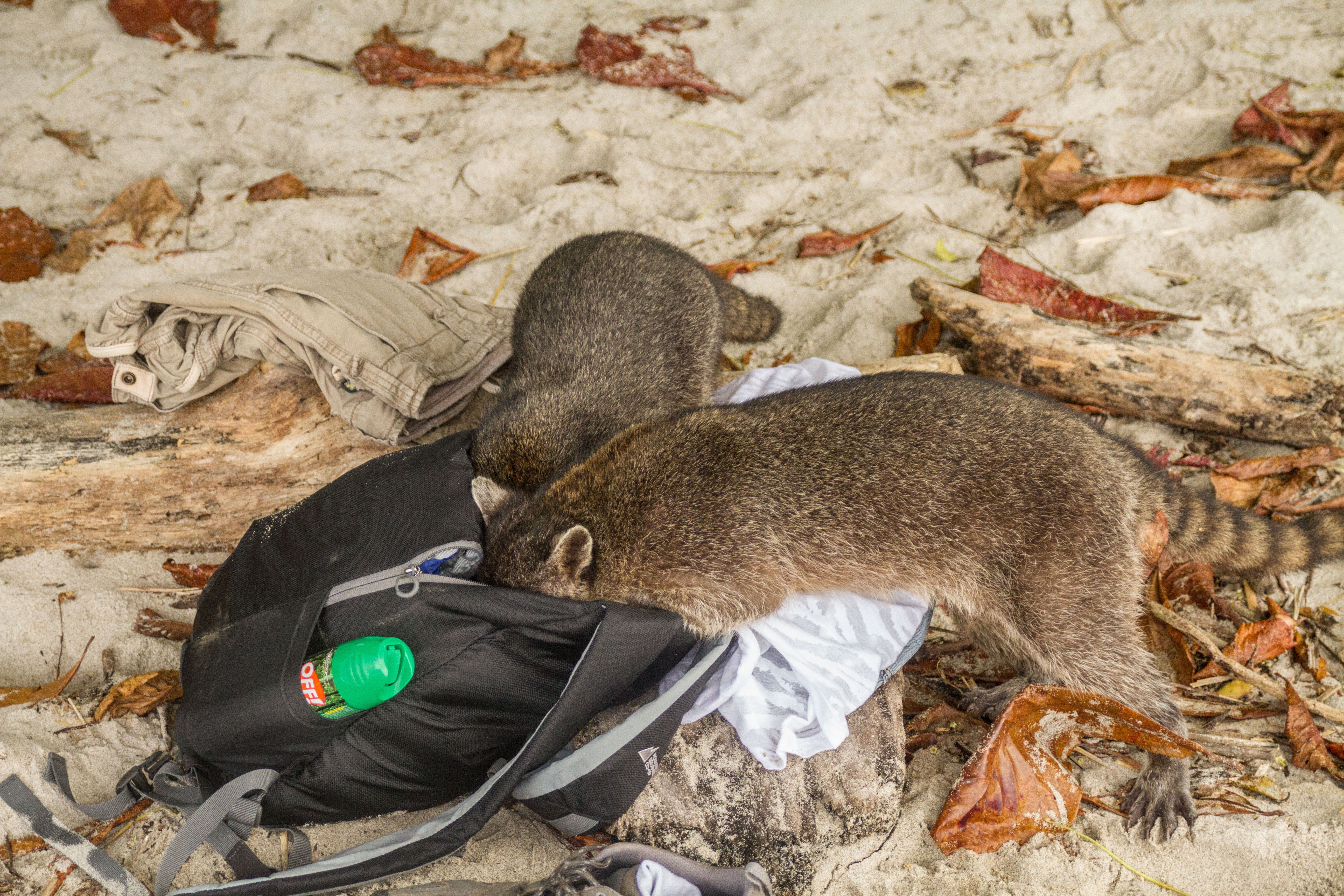 After the beach we wandered around the park for a bit more but the sheer amount of people was too much for us and we left to investigate a restaurant on a hill. This restaurant was made from a B-52 plane
that was perched up the cliff. If you are ever in the area, please check out this restaurant. The view alone is enough to leave you speechless. Food did not disappoint either and this was an excellent way to finish the day. 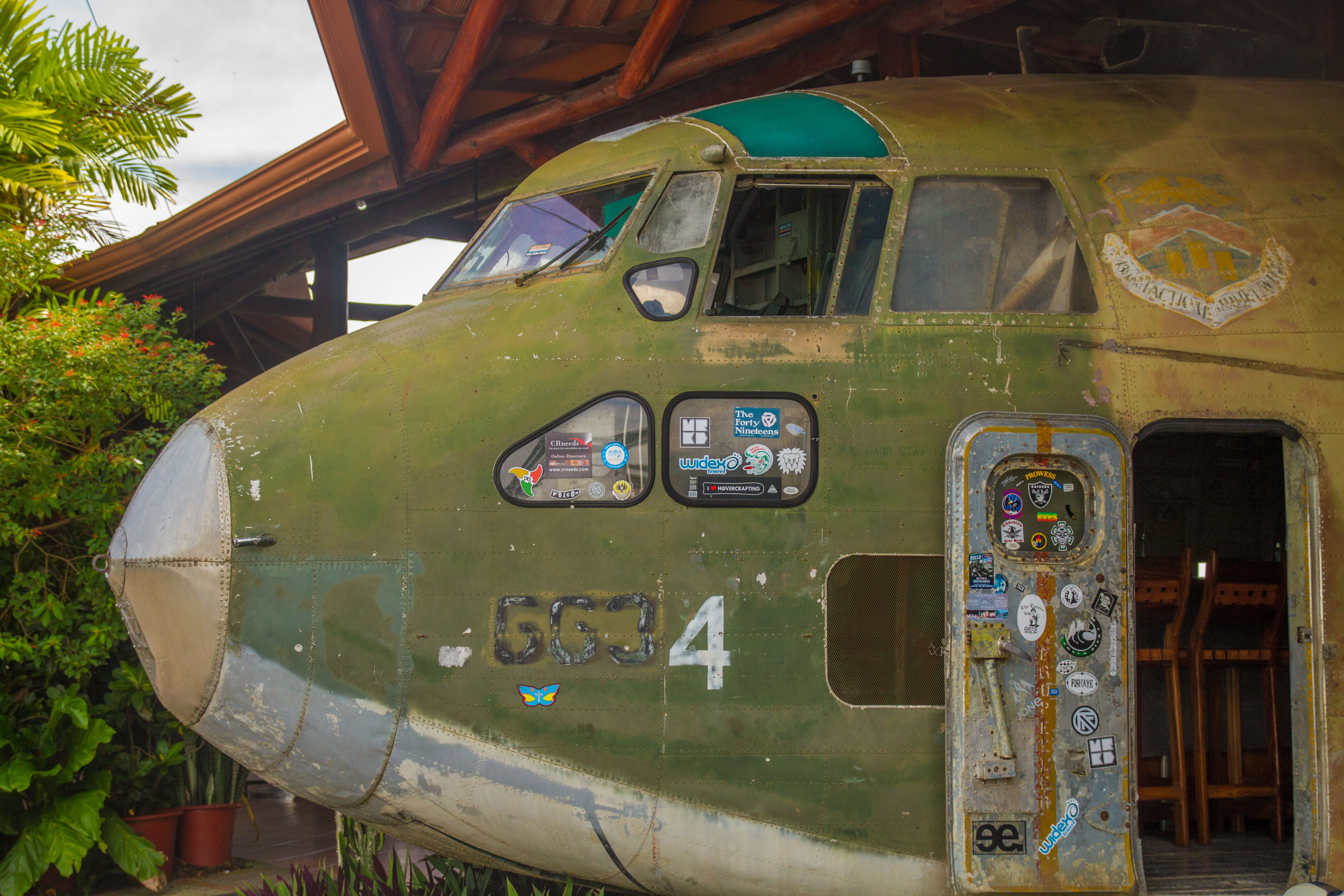 I think with proper planning and willingness to get up early a lot can be achieved in day whether you are on vacation or back home.