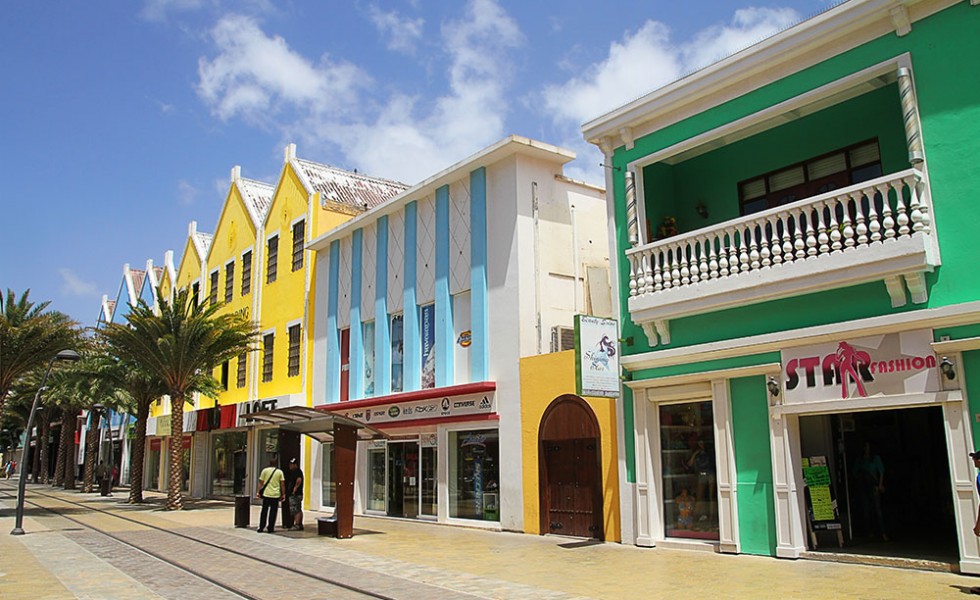 No trip is complete to Aruba without visiting the iconic capital, Oranjestad. The city’s dazzling array of colors are reflected in every building and immaculately spotless alleyways and streets make this a must for a safe and enjoyable visit. Our forays into the city were full of adventures. From getting lost to eating dinner next to sharks, Oranjestad turned out to be everything we expected and more. 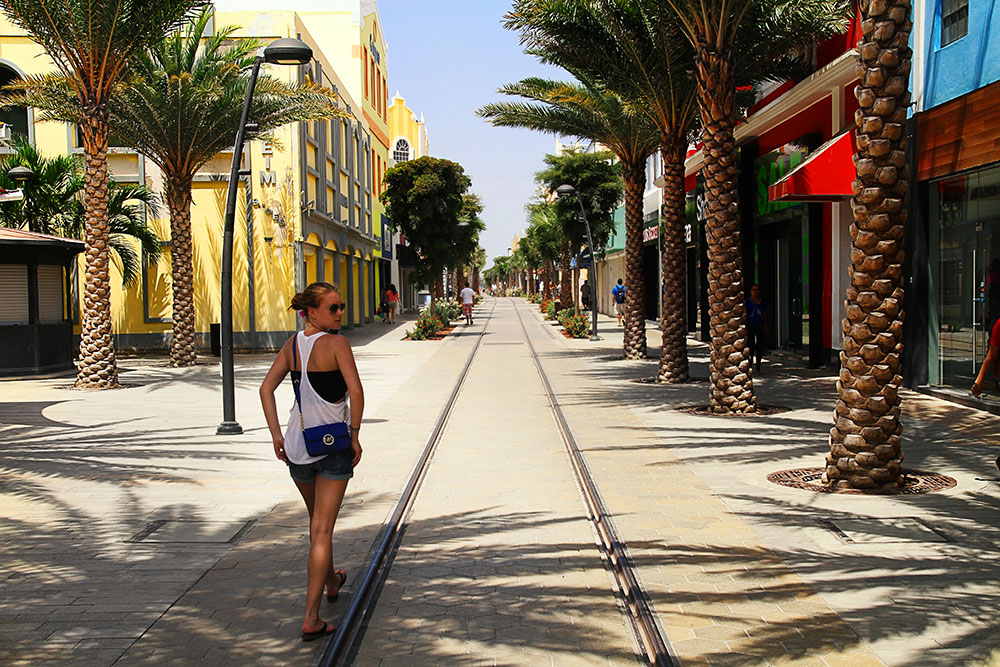 This vibrant port city is a haven for shopaholics who madly dash from one designer store to another to food lovers who want to enjoy some sushi by the beach.  On one of our ventures into the city, we were fortunate to arrive when the cruise ship set free its inhabitants. The flow of people into the city awoke it from its lazy, Caribbean slumber. Immediately, taxis started zipping by, vendors were bustling to get ready and the human traffic increased tenfold. It was a sight to see and experience. If jewelry and Rolex watches are your thing, Oranjestad was built for you. 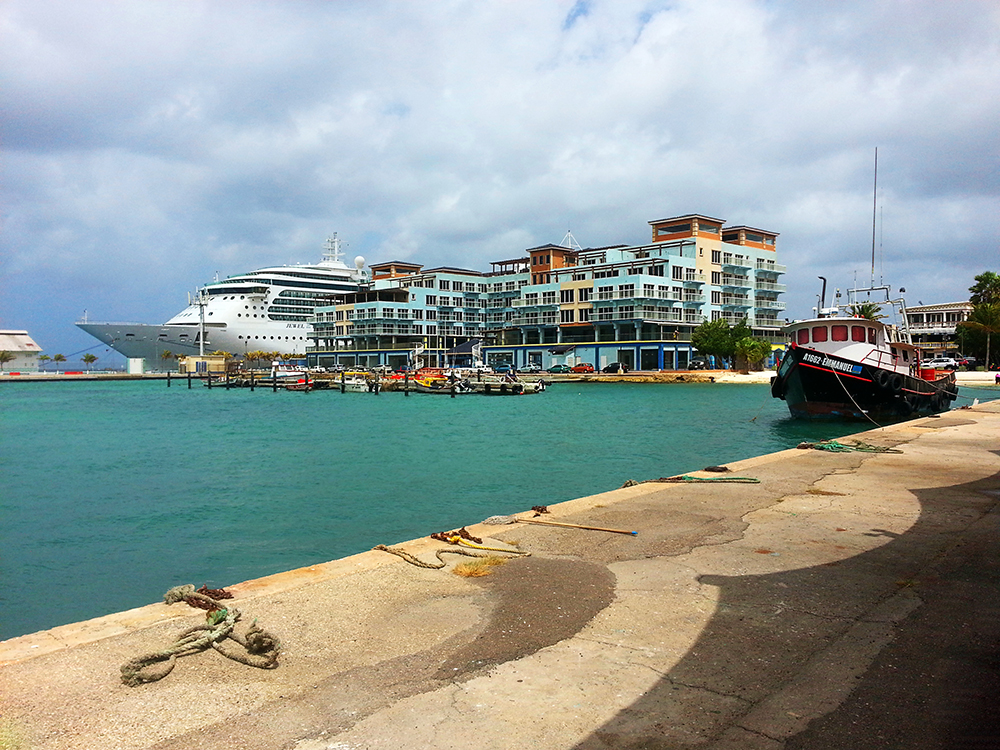 The cruise ships are vital for the island as tourism brings 3/4 of the economy.  The throng of people coming off and dissipating into the alleyways and stores for a few hours and then reappearing again was surreal to witness. The younger tourists take in the sights in a common american tradition of a “party bus”. These graffiti covered school buses have music blaring and alcohol flowing party non stop. The tourists are yelling, screaming and “having fun”. If you want to make a negative impression, this is the way! The bus rolls around the city and then brings everyone back to the cruise ship where they will substitute the bus for a ship. 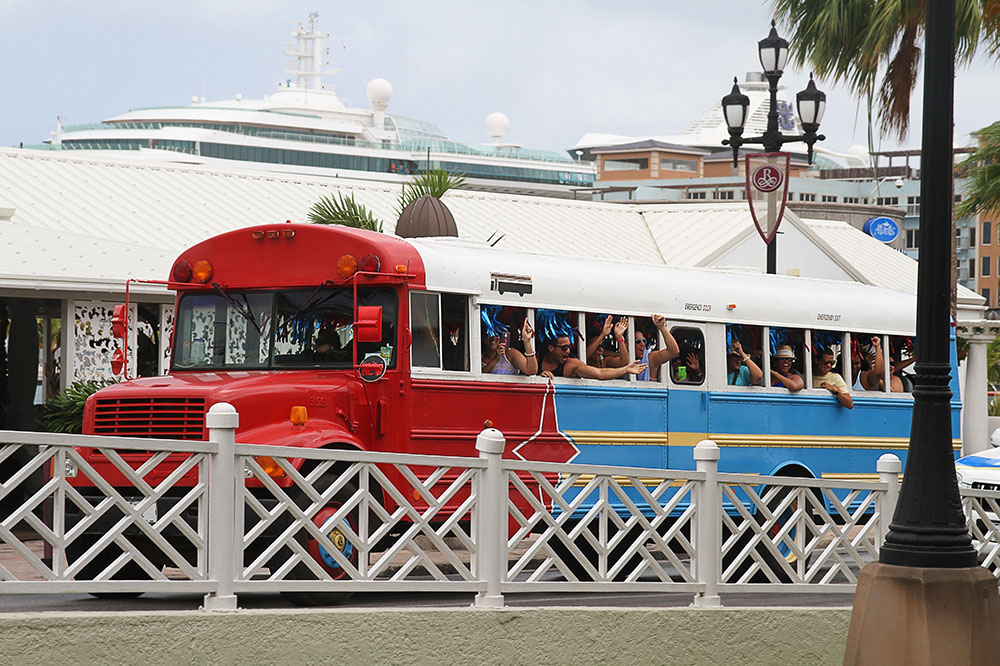 We decided to stop for a bite to eat in a very unique restaurant called “The paddock”. This is a hippie heaven and an interior designer nightmare all in one. There is a car, cow and a huge T-Rex dinosaur on the roof of this establishment. Upon entering it gets better with license plates from around the world screwed on the ceiling and the back of the bar covered with currency from around the world. There are bills from countries that no longer exist. The music was blaring and we decided to grab a seat by the dock. The food was passable but we weren’t complaining. We sat in shade, watching the turquoise water and drinking Balashi beer when all of the sudden a shark jumps from the water trying to grab a seagull. The seagull had Bruce Lee reflexes and flew away and the shark disappeared back into the safety of the deep. I asked the waiter if he saw the shark and what type it was. He didn’t answer and ran off to quiet the patrons about big fish.

“Big fish, no big problem” that’s what he told them. He returned and I asked again. This time, he leaned in and said:

” It was just a big grouper, you have nothing to worry about, they come here sometimes but they don’t jump on the dock, heheheh”

I told him that it was a shark and he just nervously laughed and left. He came back not even a minute later and brought the bill. We got the message…

On a side note, we spoke to the local fishermen and they told us that the waters are infested with baby sharks. They live in the relative safety of the docks and there are plenty of food from the fishermen that bring their trophy tuna, swordfish and gut them right there on the dock. It makes sense to avoid telling everyone there are sharks by the dock as this would give the island a bad rep. 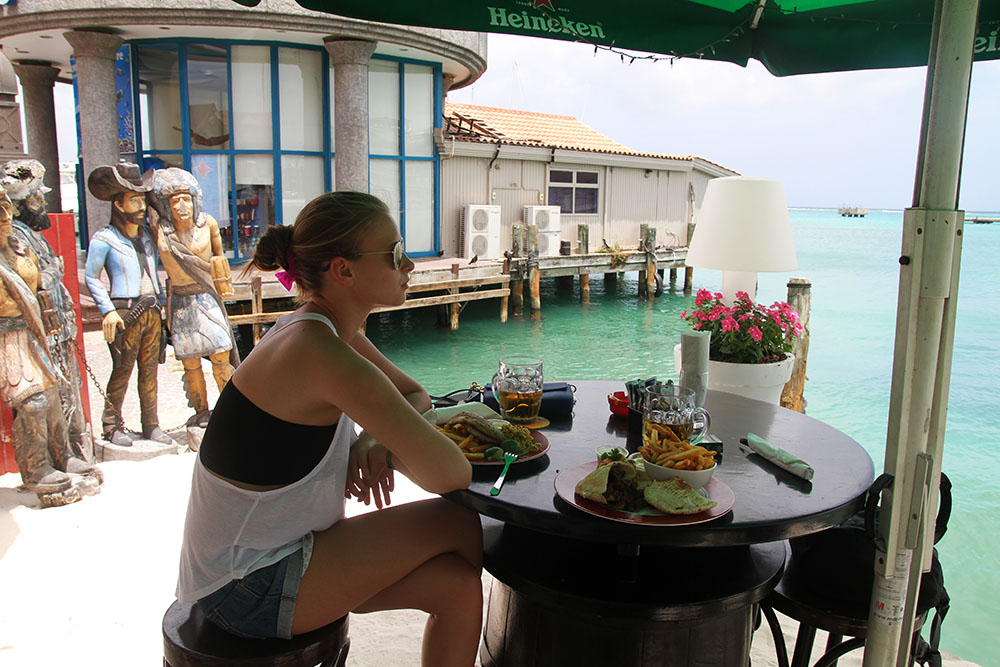 We left the funky restaurant and decided to see what’s the big deal about Renaissance mall.  The mall is quite good to satisfy your shopping hunger and with air conditioning it is a nice respite from the unforgiving sun.The mall does have one peculiarity. We heard water and by following the sound, came to a grotto in the mall that had water taxis that would ferry the guests from the sea side hotels straight to the mall. So you can get into a speedboat and within minutes you are standing on marble floor paying for your Gucci bag. That’s an original way to shop! Shopping is not my thing whether it is by speedboat, helicopter or on top of an elephant. 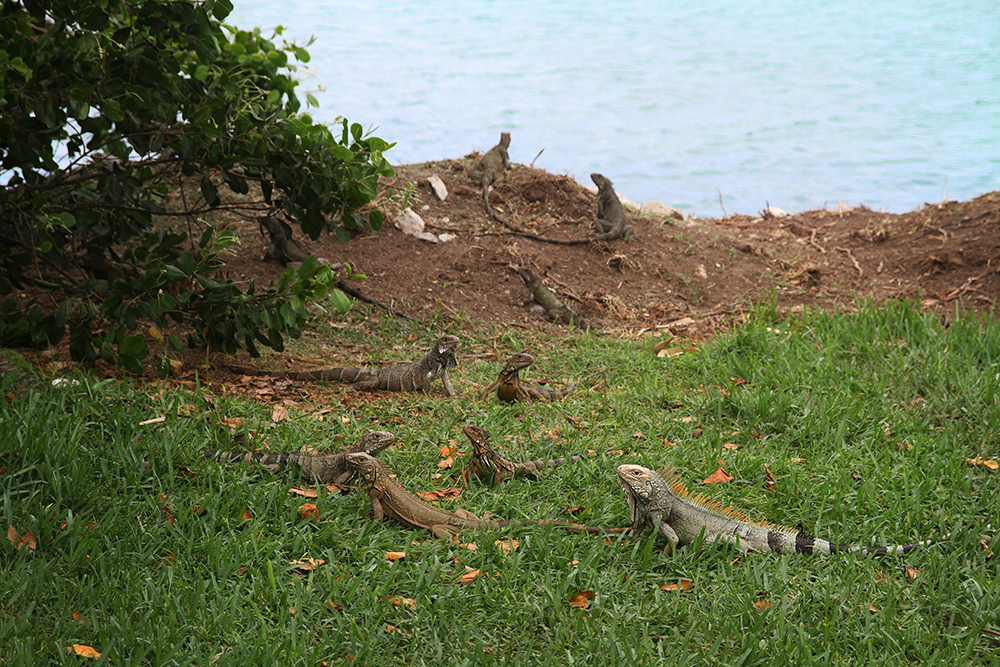 We made our way to one of the most famous landmarks in Oranjestad, The Wilhelmina park. It is a small park that has statues of Queen Wilhelmina which ruled Netherlands and Aruba for 50 years and a statue of Anne Frank. Apart from the two statues there isn’t much to do as people occupy the benches and watch the traffic go by. However, I would rename this park the iguana park as this place was the party central for iguanas. Perfectly manicured grass, tall trees for shade and jagged rocks to lounge on, what more could an iguana ask for?

I have to say that Oranjestad, is by far the cleanest capital city I have ever seen. Immaculate alleyways and proud citizens have contributed to this a great deal. 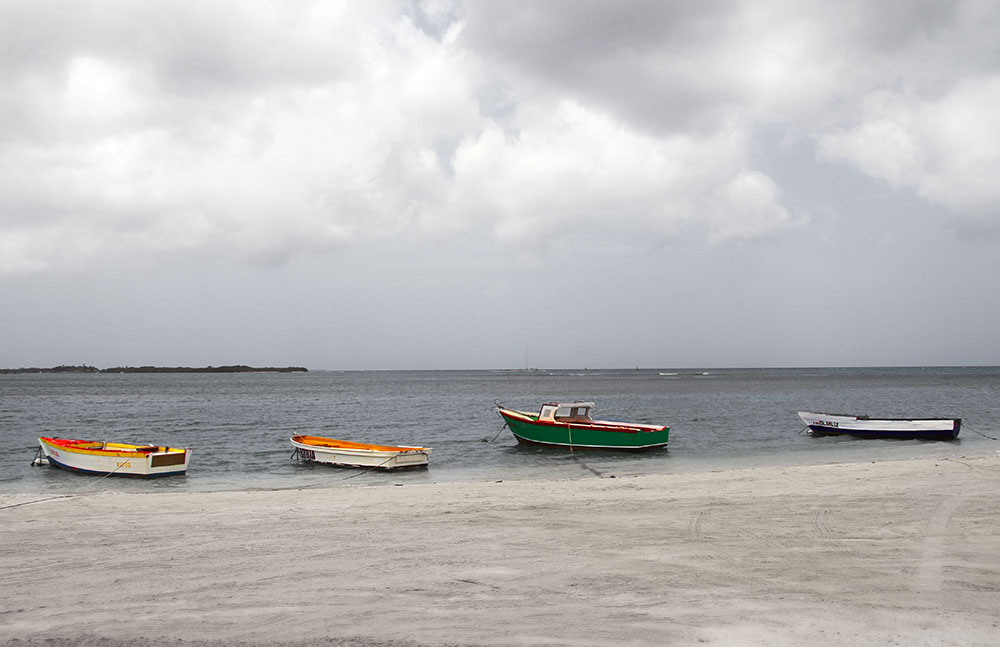 Should one want to escape the shopping scene and stroll along the beach, there is the Linear park trail that runs parallel to the main “highway”. This trail is great for stopping at restaurants, parks and landmarks. We wanted to explore the heart of the city and made our way to the Cayo Betico Croes, a large avenue that houses a working tram! Cobblestone and palm trees are the two things that stand out the most. Small tip! There are plenty of great stores on this street and they tend to be a lot cheaper than the those on the main street and the Renaissance mall. If you are looking for cheaper clothes and souvenirs, try the Cayo street. 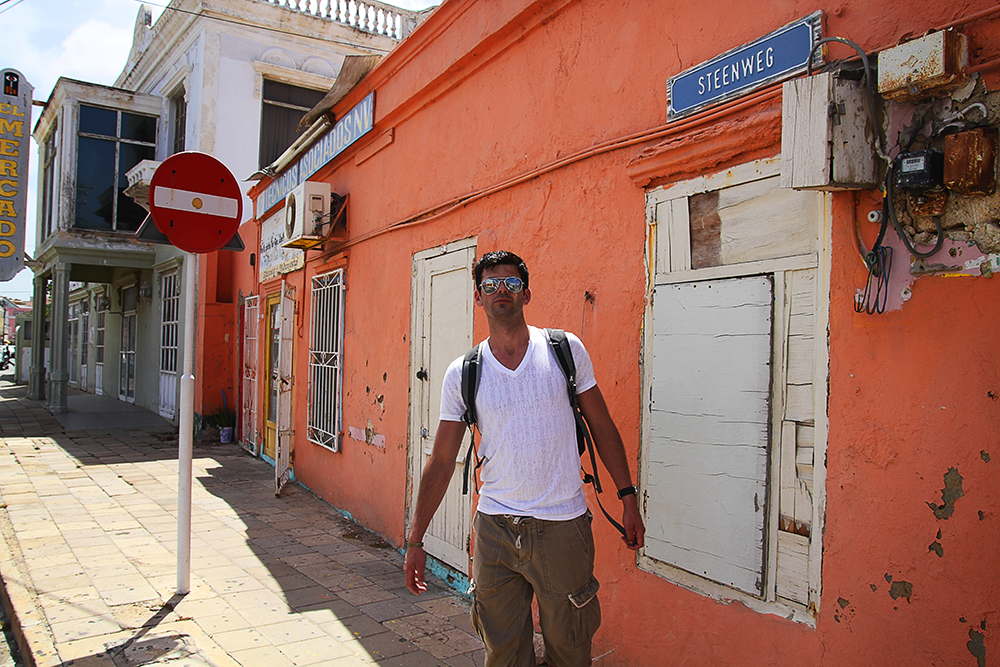 Exploring the city should not be limited to the tourist areas but exercise should be cautioned if venturing into areas such as this one. This is a stark reminder that even on such a rich and developed island such as Aruba, there is plenty of decay and dilapidated buildings. They might be glum looking but great photography subjects. 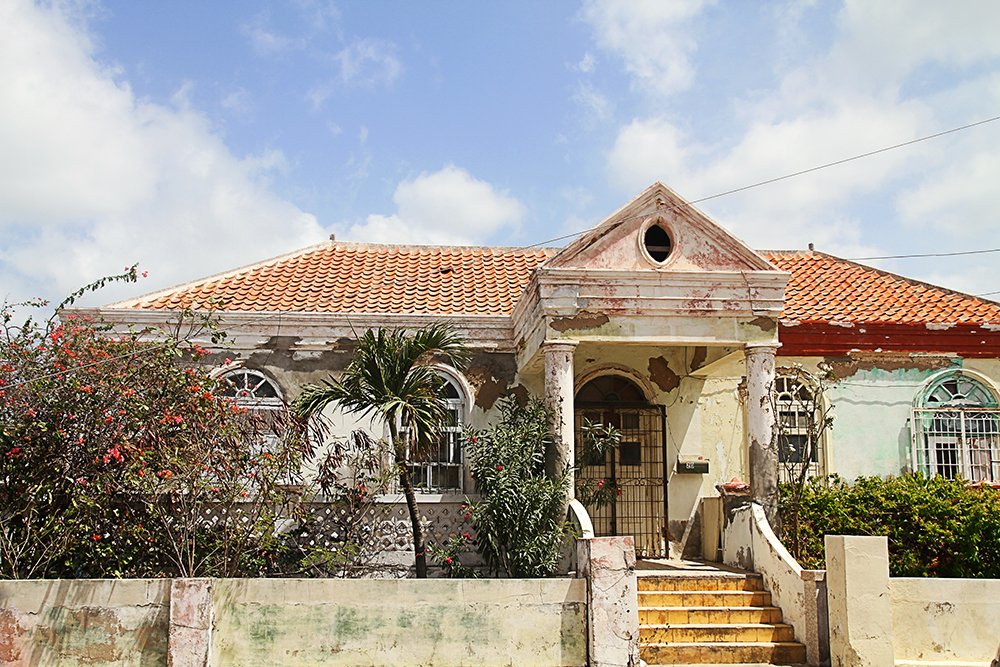 We wanted to see the Protestant church that was mentioned in a guide book and apparently it was a big building that couldn’t be missed. Well, we did miss it, and ended up parallel to the airport. No tourists were visible but the people were friendly and waived whenever we encountered anyone. The sun was scorching hot and without shade and water, things could have gotten interesting but instead we found a small local bar. It was travelling the “befree” style. Drinking beer, watching soccer reruns in Dutch and not knowing where we ended up but enjoying every magical moment that life brings us.  We did find the church on the way back. Nothing special about it. Oh, and the gate was closed. Good thing we got lost instead! 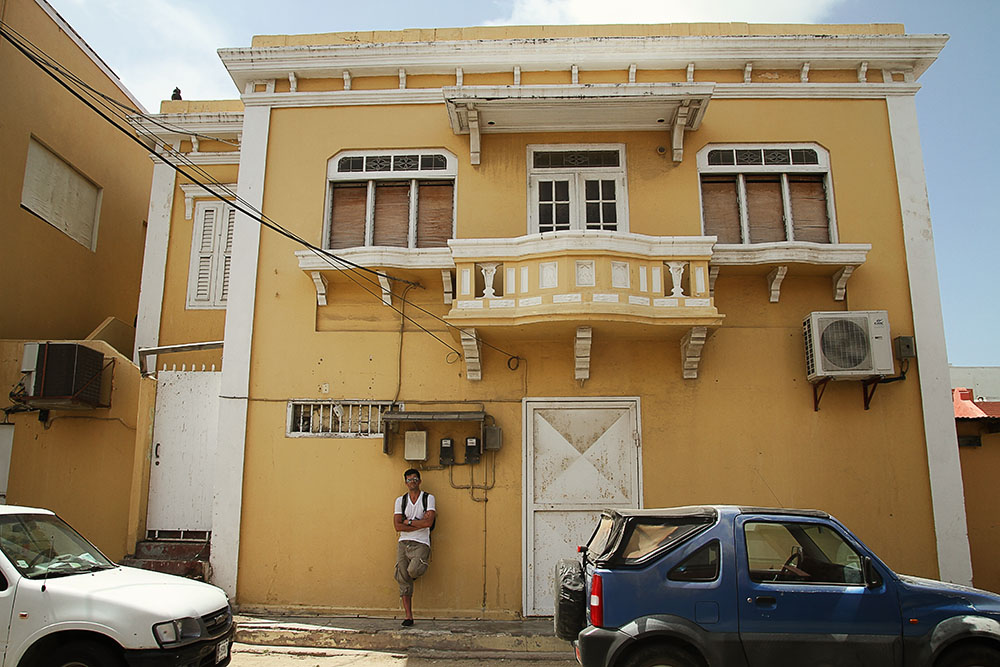 Wilhelminastraat street.. A contrast of colors and decay. The buildings are painted with every color under a rainbow and on a sunny day, the city puts a dazzling display of colors. We strolled by the these living quarters and what amazed us was that no house was the same. It was as if each one had a different personality. A much different picture can be noticed in Canada, with rows upon rows of cardboard houses that only differ by their front door. 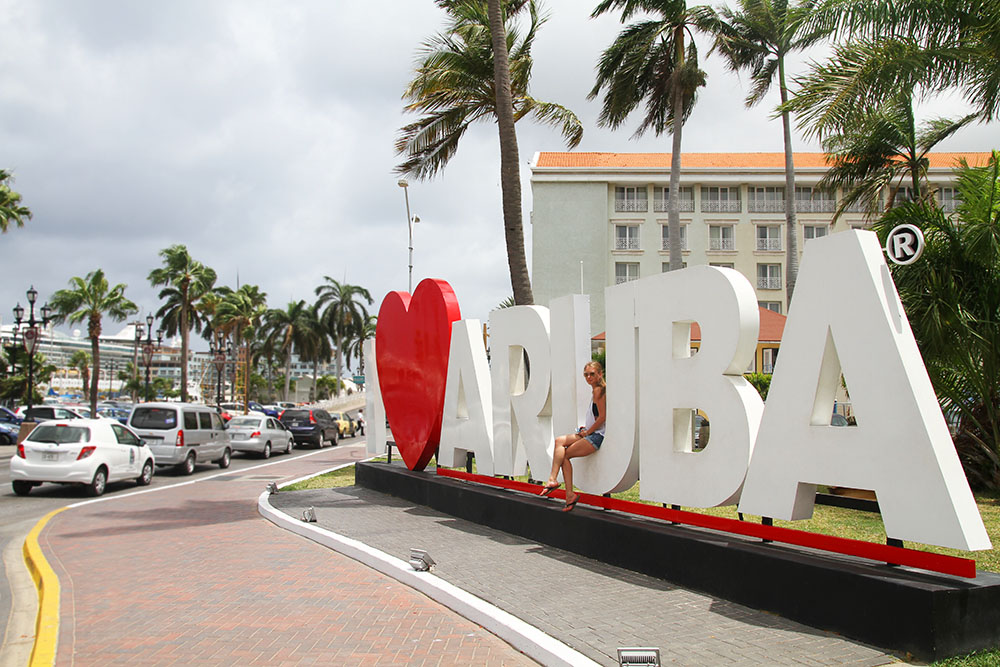 The main road is congested in traffic during rush hours and it is almost comical to see traffic on such a small island. The cars are honking and vying for position trying to outmaneuver each other, yet one can ride across the whole island in little more than an hour. Aruba is famous for its ” heart Aruba” signs and the locals are very proud of their island and would smile at you when you pose beside their most famous sign. 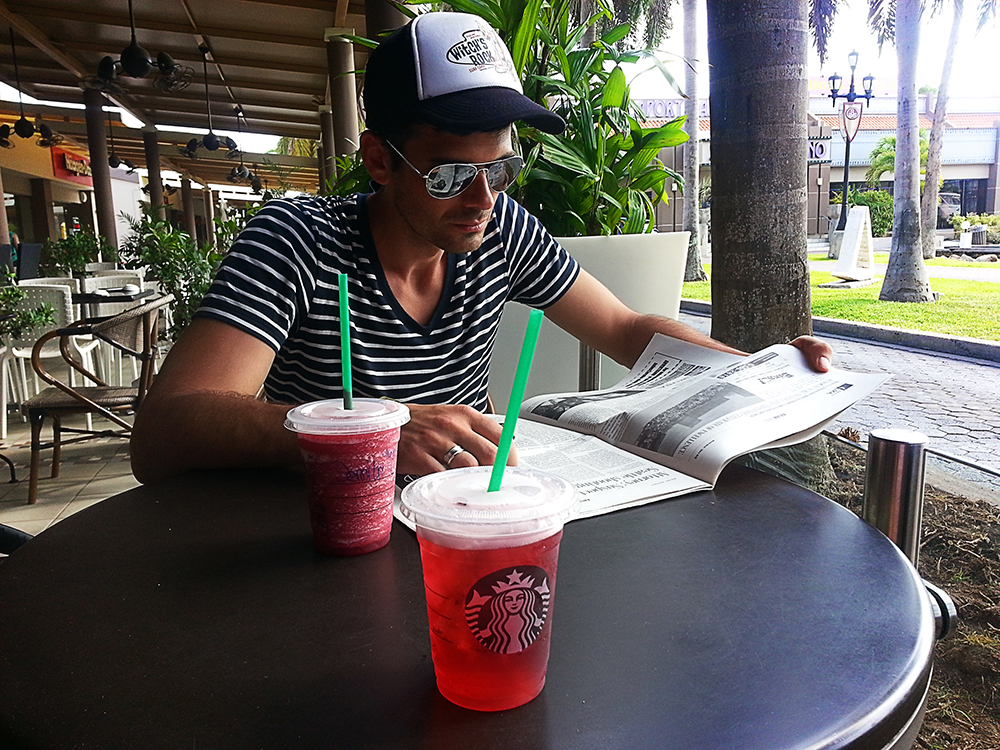 Our second time in the city, we decided to stop by a sushi restaurant. The food was amazing and it had to be with us waiting for the rolls for more than 45 minutes. Across the restaurant was a boat launch and yachts would come in with tourists happily posing with their catch. The locals would then come in and buy fresh catch right there. It must be idyllic paradise to be strolling in this European paradise island and have the casinos, shopping malls and muscle cars revving by, yet you are walking with a bag of swordfish meat without a worry in the world.