posted on January 30th 2015 in Costa Rica with 5 Comments 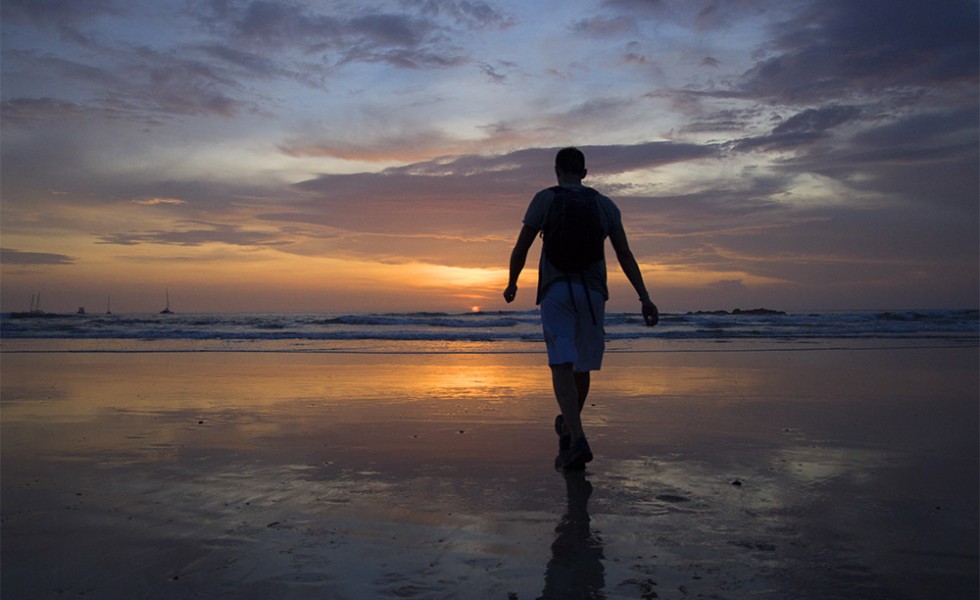 Tamarindo is the closest one can get to North America. Now, this is a bold statement and highly debatable topic on forums and among those that either call it home or has visited.

Our first visit to this surfing hamlet happened accidentally as we have not been familiar with the area and have driven there on a whim while exploring the beaches. We came there as the sun was setting. Surfers were bustling about with their surfboards, music was blasting from open windows of cars and souvenir shops. This was reminiscent of a Floridian vibe and as we made our way to the beach and watched the surfers bob above water, waiting patiently for that elusive break before the sun dips below the horizon. As the sun disappeared from the view, the sky exploded in a myriad of colors and we were hooked to return. 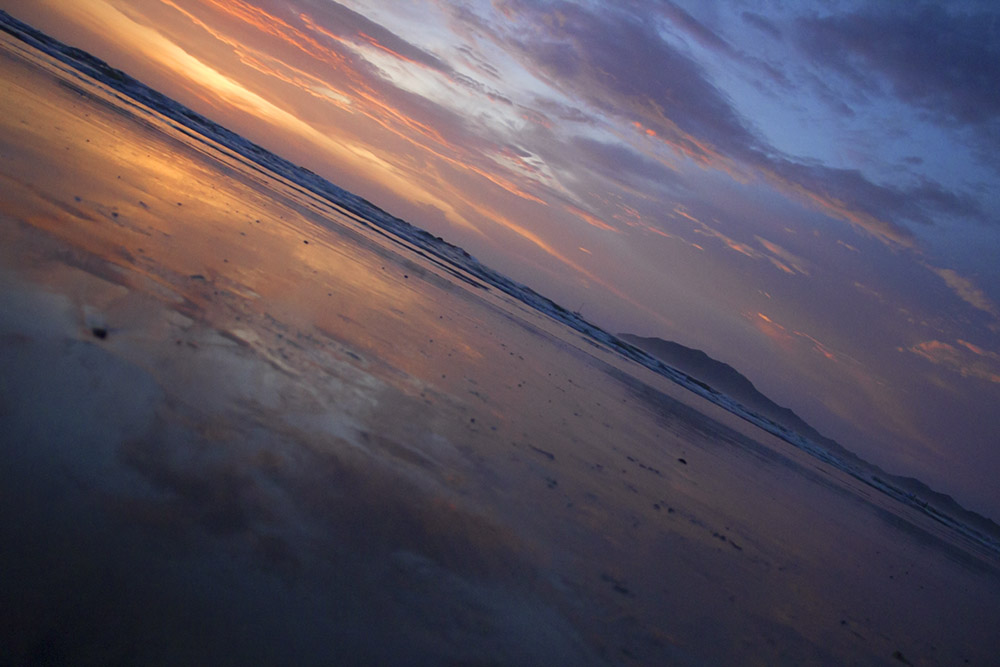 Upon returning to Costa Rica and embarking on a road trip across the country, we decided to settle in Tamarindo and explore the city and surroundings. We wanted to relax and surf before heading back to Canada.

Our hotel, Best Western Villa Vistas was conveniently located on the outskirts of the town. 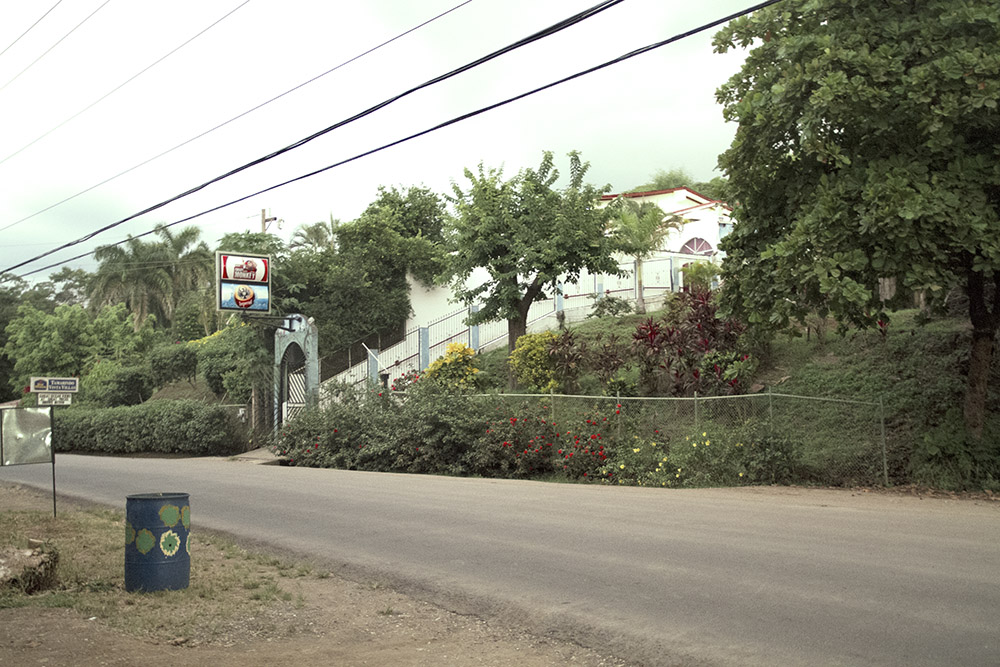 The hotel was a run down, tired place with construction everywhere but we were there for the beach not the hotel. We arrived on a Friday and found out that the whole town is at the hotel for the weekly Friday night party. I was too sick from food poisoning to care but sleeping was impossible.The walls were reverberating from the bass. We watched shadows dancing on the ceiling and waited for the party to be over.  There isn’t much to say about the hotel other than the coffee. They served some amazing coffee and we took advantage to get our caffeine fix early in the morning. 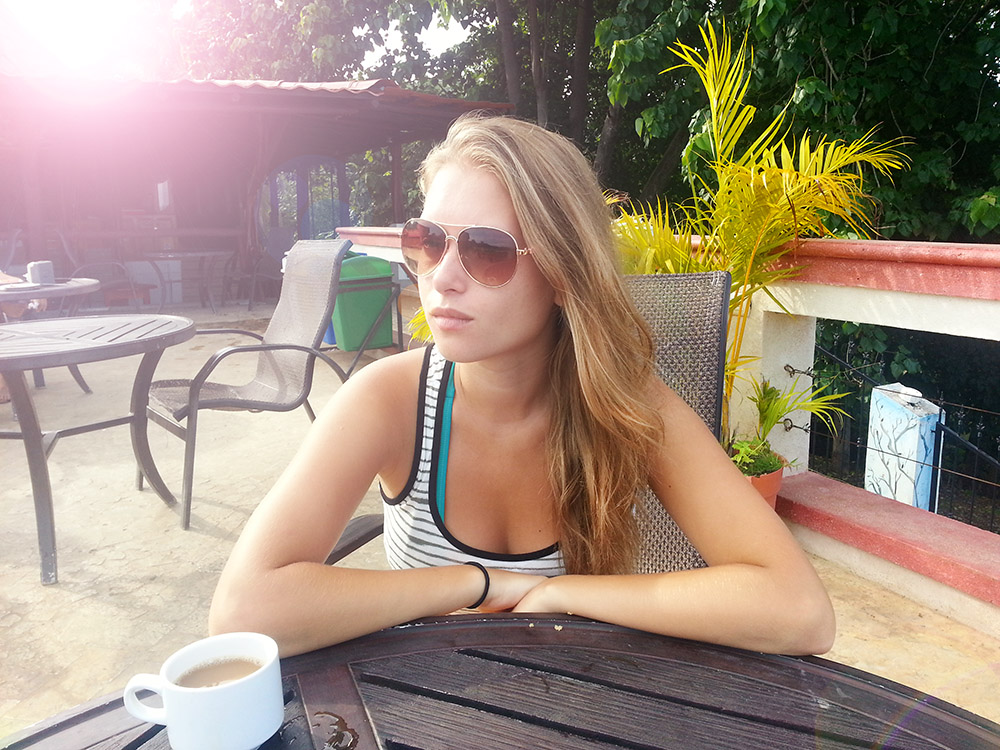 One concern that I did have with the hotel was the absolute despicable treatment of Scarlett Macaws that they housed behind the hotel in cages that resembled a torture chamber rather than a rehabilitation center. The poor things are in terrible shape and by observing mounds of garbage and beer bottles that litter the grounds, these birds get the “care” they need. I love animals and consider them to be helpless against such a nemesis as humans and to see this, pained me. I visited them regularly during our stay and apart from bringing them fruit and talking about random things, my hands were tied. I asked a worker if anyone takes care of them and was told with a laugh ” who cares about some shitty birds”.

Well back to Tamarindo. The town residents are proud to have three paved streets and bustling lifestyle. This town is a paradise for surfers and expats. 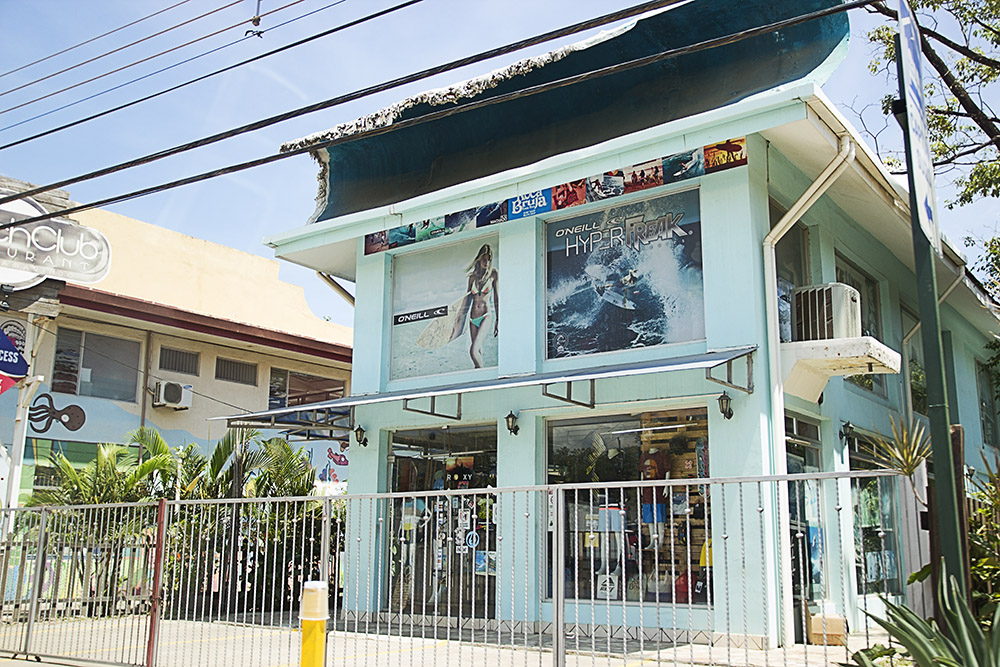 Restaurants of every cuisine are sandwiched between surf and souvenir shops. Tourists make the bulk of traffic here and everyone is welcome here. We discovered Witch Rock restaurant and surf school and spent almost every day there. The food is amazing with surf legend Robert August mingling with the patrons. We got a nice autograph on a metal “endless summer” plaque which proudly hangs in my bathroom now. 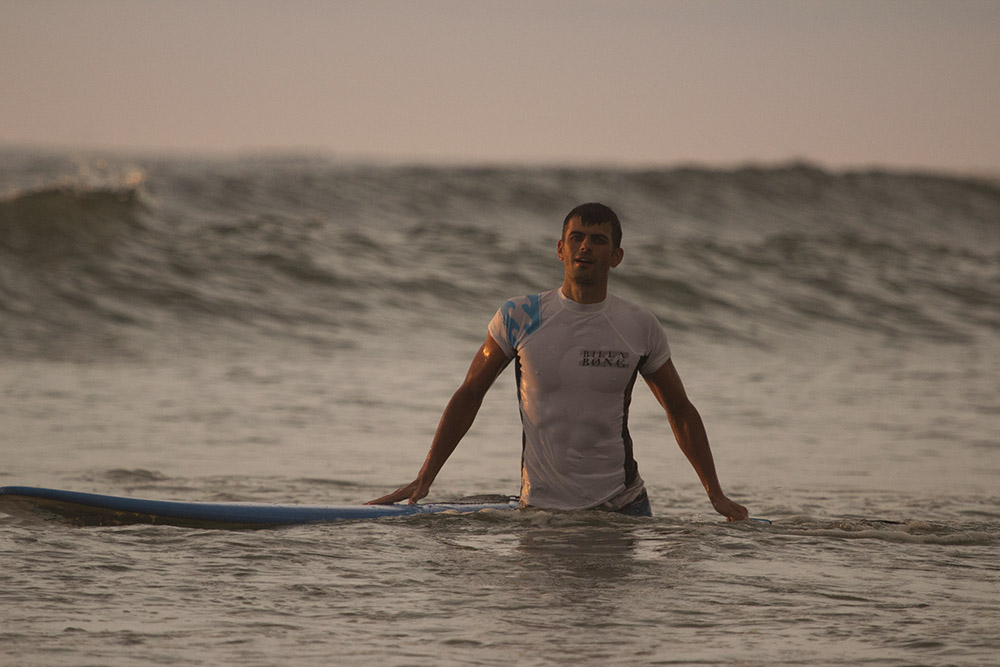 The competition between surf schools is fierce and we have heard that everyone who took lessons was happy. We chose Blue Trailz for renting boards. They are very laid back, service is great and they have huge selection of boards. We would make our way to the shop in the morning and catch some waves before chilling on the beach or exploring various nearby parks. 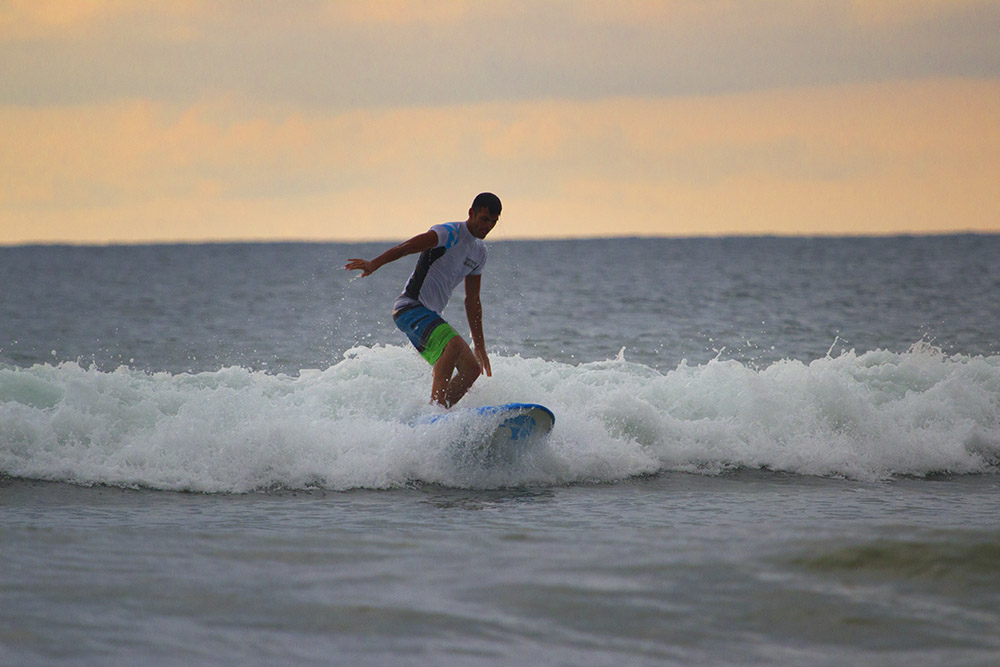 The beach gets more crowded in the afternoon when the tide is coming in and waves are higher. The beginners are dropping in on waves all the time but the pros don’t mind and there is more laughter heard in the water than on the beach. 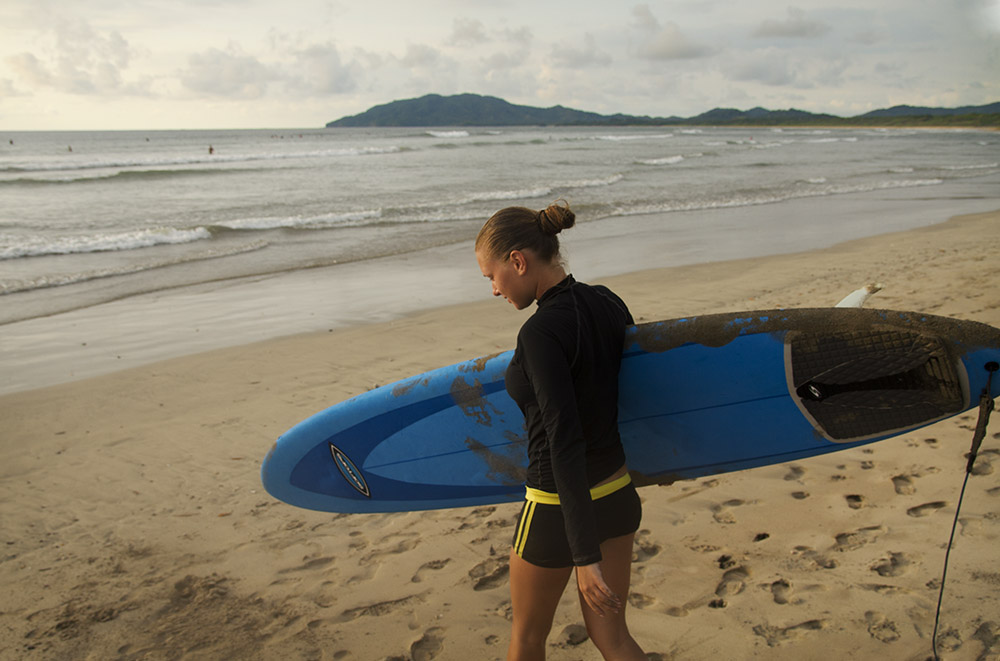 For those that are not interested in surfing, wildlife watching is around every corner. Marino Las Baulas National park is a mere minutes away. You can take a shortcut and swim across a river that feeds into the ocean but do it at your own risk. Crocodiles inhabit these waters and on our last day, a surfer was bitten by a croc while waiting on a wave. Las Baulas is also the nesting ground for leatherback turtles. 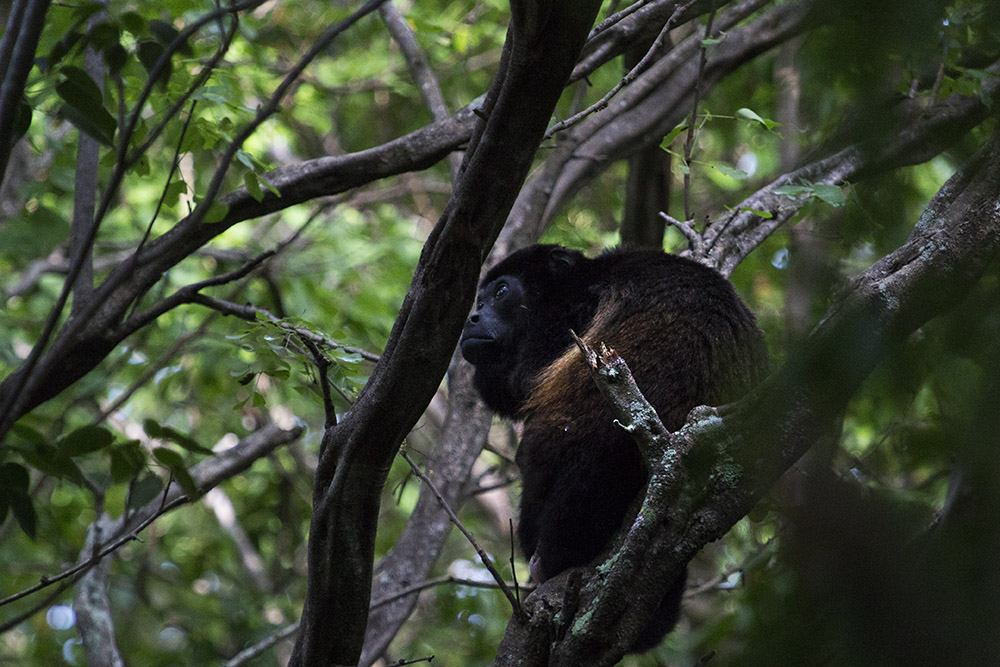 The food is quite expensive in the town and highly overpriced in comparison to other areas but that is the price to pay in a tourist hot spot such as Tamarindo. We had a veggie pizza at one place and it was the strangest meal we had there. The veggie pizza had broccoli and carrots on it and with a price tag of $17 it was tough not to eat it. Another interesting find was a local hot dog stand. I am lamenting that I didn’t take a photo of the alleged hot dog. It was $4 and it was literally the size of a index finger.  After catching waves till the sundown, we would stop at a convenience store and buy some dry kimchi soups and then head back to hotel to watch reruns of “friends” and eat our awesome dinner. Our room had a small window above the bed and at times we felt like we were in a bomb shelter but with soup, “friends” and a bottle of wine, we were in bliss. 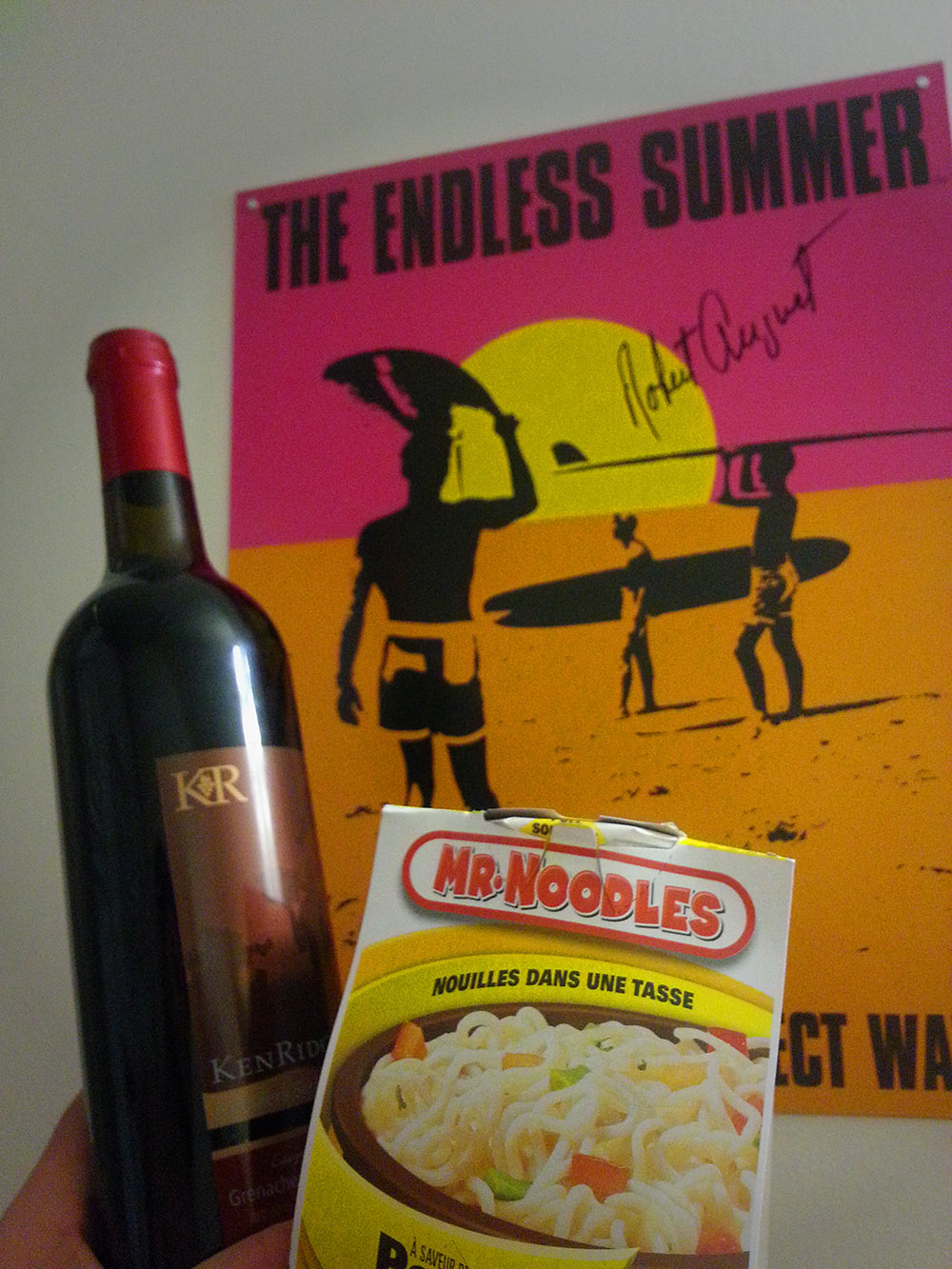 We had a very “interesting” incident in the town. We were coming back from the beach and decided to make a shortcut through one of the alleys, we were approached by some dude offering us drugs. I didn’t hear what he was saying and turned around to see what he wanted. He took offense at me looking at him quizzically and pulled a gun on me. He was obviously very brave with the gun and kept repeating that he will find me.  Just remembering this idiot gets my blood boiling. Unfortunately, tourism and surfing does attract a certain crowd and they are rampant in Tamarindo. I befriended one surf store owner and he told me that the vast majority of drug peddlers are either expats or Colombians. He spoke with bitterness in his voice that Ticos are different and should not be typecast the same way as those that wish to make a quick buck.

Staying in Tamarindo for more than a week gets boring and our restless souls were bored with the routine that engulfed us so we used the town as a launchpad to visit national parks in the area and get back in the evening. I have to say that Costa Rica has higher concentration of animals than any other place we have been in. 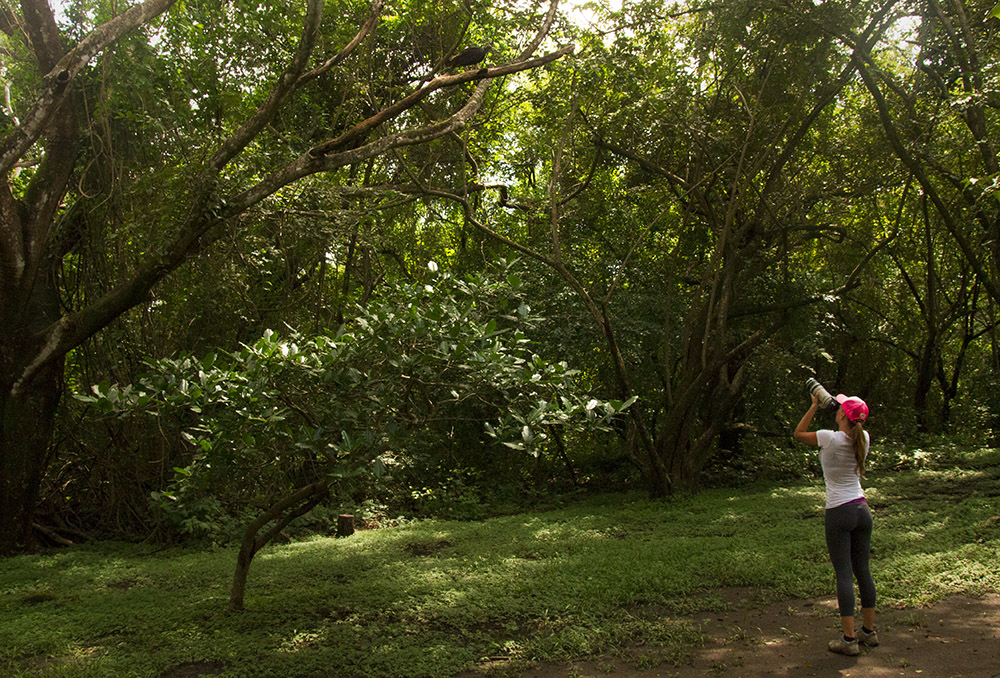 Majority of them stayed around long enough to be photographed but there were some that got away and apart from a good story cannot be proven to be a sighting fact.

Parque Nacional Santa Rosa turned out to be more than just a collection of hiking trails. The park holds a national significance as a place where Costa Ricans fought and won three battles against invading Nicaraguans. The park also has 10 different unique habitats from savannas to mangroves. I think if one stayed there long enough, the remoteness would ultimately create an interflow between their soul and nature. A truly unique park to visit. 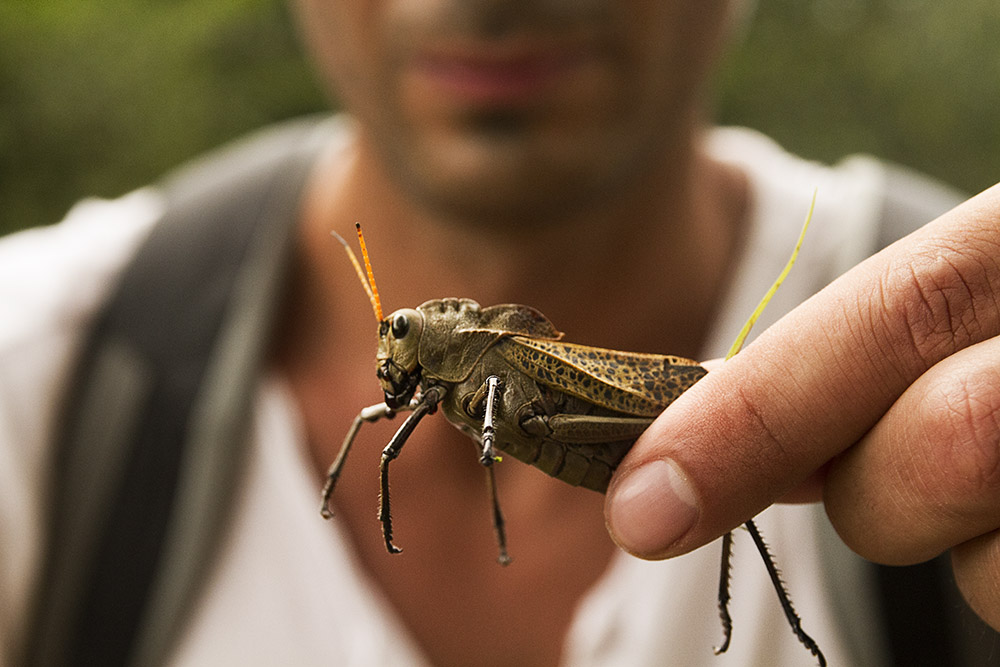 I was delighted to find an entomological research station deep in Santa Rosa park. While hiking, we lost the trail and just continued to follow old footprints in the mud. We arrived at an encampment of small huts with satellite dishes on them. We wandered around and found a cafeteria without a front door. I saw a bearded man sitting and typing away on a laptop. He did not turn around upon my greeting and I was too curious to leave. I went further in and he took off his headphones off and was shocked to see another human being. He told us that this is a biological research station and they are studying insects and amphibians for a university project. They live there and come out once every few months. He showed us a way out and as we bade adieu, I couldn’t help but feel burning envy for their life. They were more happy living deep in the jungle than the myriad of office plankton back home that make 10x the money and complain about the weather and price of gas. 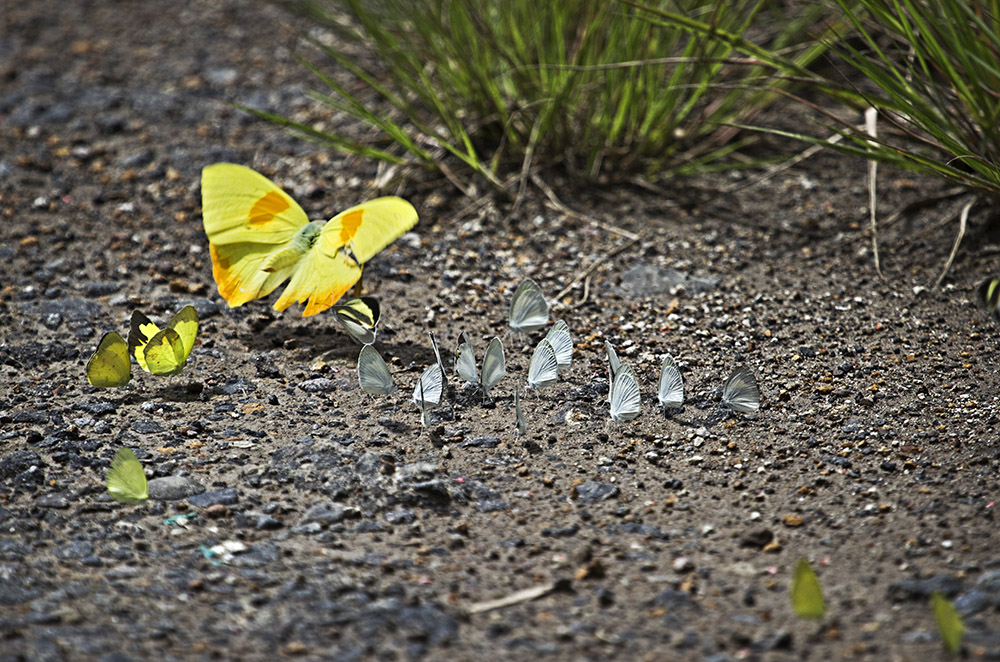 We left Santa Rosa and mistakenly made a turn and instead of driving back to Liberia, we arrived at the border of Nicaragua. We realized that this was a wrong way when police presence became evident on every turn. As we made our way to a police checkpoint, we sheepishly admitted our mistake to the border police. They laughed and said that Liberia is not to far away, but in different direction.

One of my goals in Costa Rica was to photograph the elusive Kingfisher. I spent countless hours being eaten by mosquitoes and other insects that prefer blood and flesh trying to photograph this camera shy nemesis of mine. The best opportunity presented itself near Playa Panama near a stream. The howler monkeys were busy peeing on me from the trees and I dared not budge for this bird to fly off. He stayed for one shot only and flew off as if saying ” here, the debt on my part is paid” 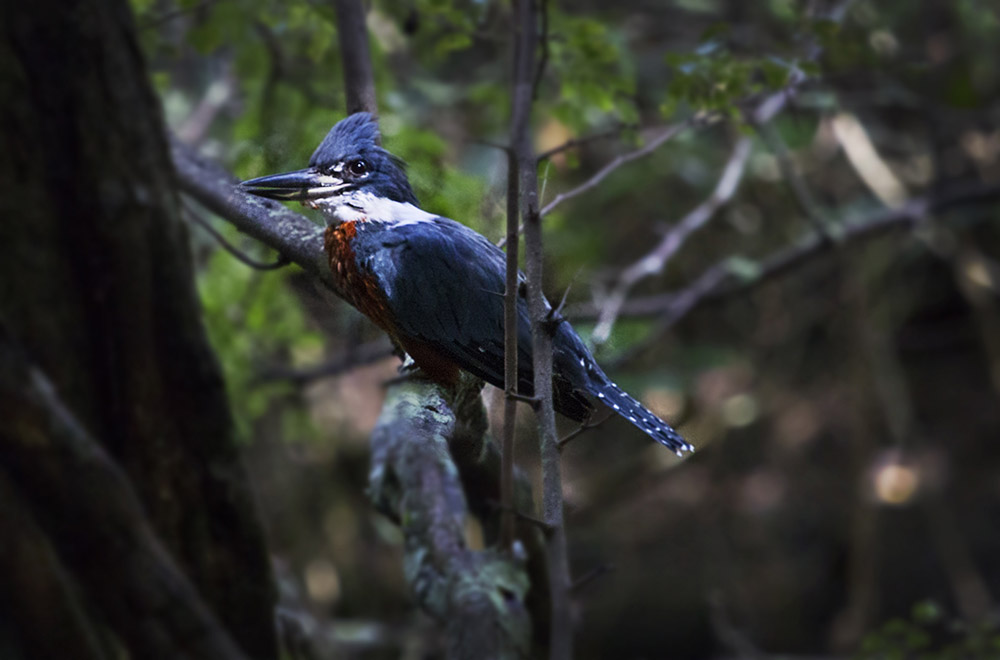 While in Playa del Coco, we found the absolute best way to use a stick man with this very thorough instructional sign how to use the beach. My favorite is the second scene. I call it ” diving into a rock bed”.  We read the instructions thoroughly and after waiting out a rainstorm, decided to go for a quick swim. The beach was deserted with choppy waters and cloudy skies. The waves and clouds were driven in sync by angry wind coming from the sea. If this was not bliss, I do not know what is. 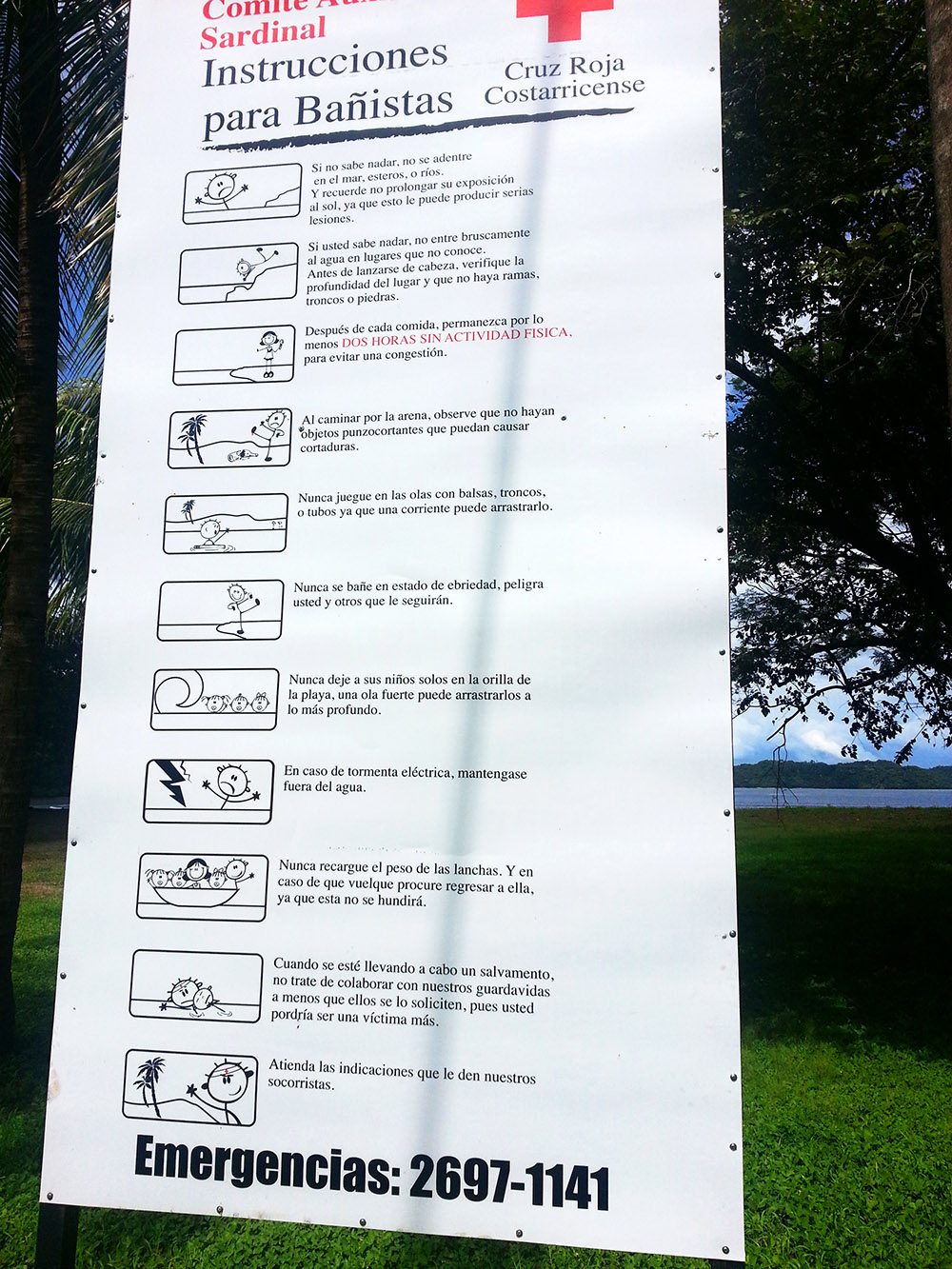 That way one can explore dozens of beautiful beaches that make up the coastline. Our favorites (all can be visited in a day by car) are Playa Grande, Playa Flamingo, Playa del Coco and Playa Hermosa. We loved how each is has a feature that stands out as if the beaches want to stand out from each other and show off its individuality. All had one thing in common; they were devoid of people and from the logjam of surfers and tourists of Tamarindo, this was a nice respite. 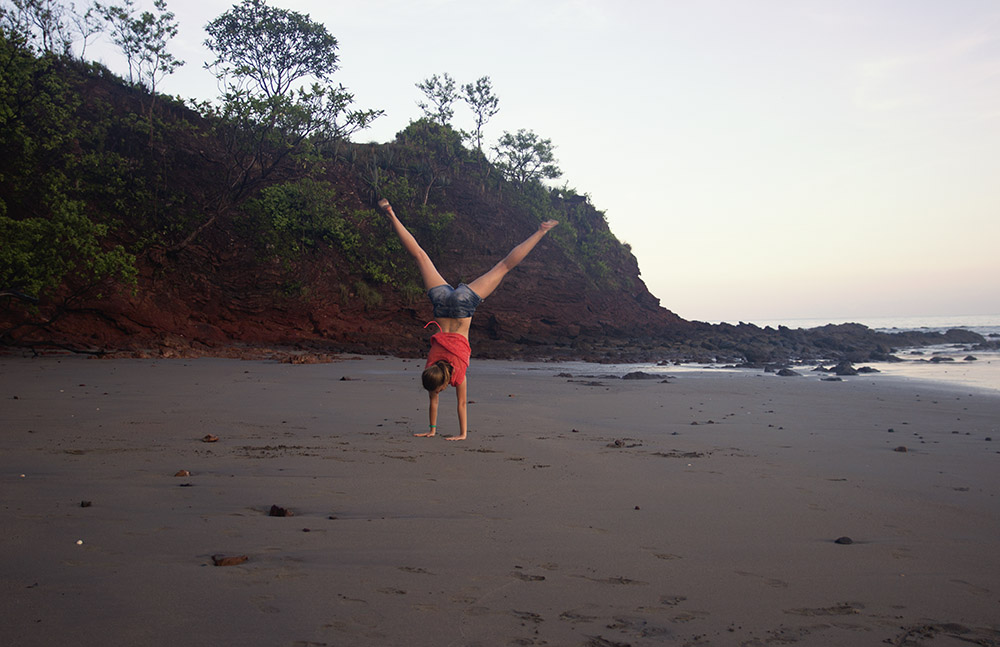 It is also convenient to visit Barra Honda, Palo Verde and even stumble to the border of Nicaragua.We made use of the our trusty rental that logged over 2000 km for us exploring this fantastic country. Along the way, we encountered police checks, darting animals and ingenious ways to transport anything from livestock to huge concrete slabs that were safely hastened with a few rocks underneath. 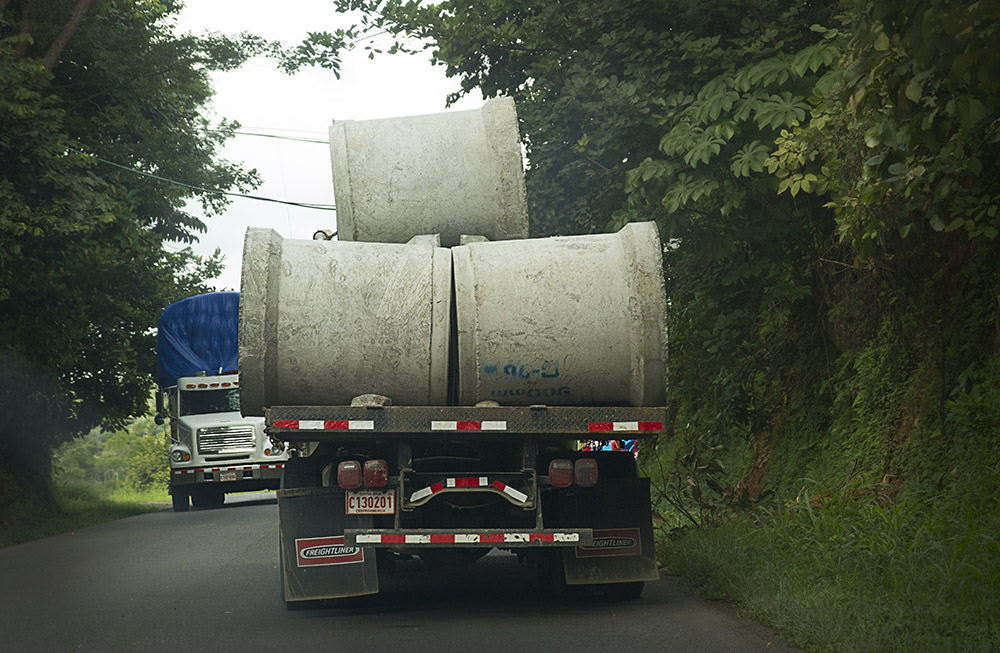 As we were leaving our launch pad of Tamarindo, we stopped on the way to the Liberia Airport on our favorite little restaurant called the “Greenhouse”. The food is spectacular and we always stopped when passing this place. It sort of became a ritual. Even now, I remember the calamari with a sigh. I highly recommend this place. 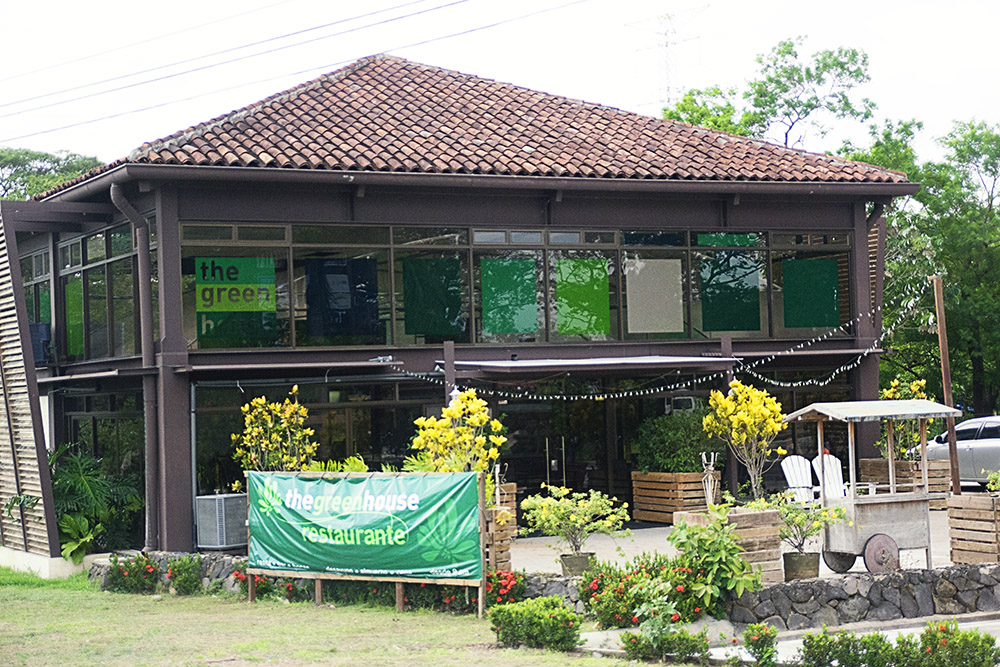